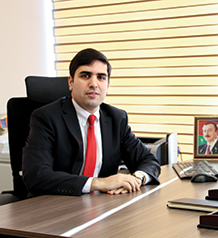 If You Build It

Share on:
TBY talks to Rovshan Najaf, Executive Director of Azerbaijan Investment Company (AIC), on the benefits the first European Games will bring and FDI in Azerbaijan.

What benefits will the first European Games provide for Azerbaijan in both economic and social terms?

The first European Games will bring new experiences, advanced technologies, know-how, and innovative ideas, as well as improved benchmarks for future development. The standards achieved will have to supersede previous ones to meet more sophisticated requirements in the future. To maintain sustainability, new investments will have to be allocated in partnership with the private sector. These projects will also give birth to new spin-offs in other sectors and create numerous jobs. The country will offer world-class venues and services to host international events. According to a recent study by a UK-based construction consultancy firm, projects with clearly defined objectives and performance requirements contribute to universal economic and social benefits.

What have been some of the most important achievements for AIC in 2014?

With the overall value of our projects currently standing at over $1.1 billion, the integration of new technologies, modernization, innovation, and competitiveness, as well as the development of the capital markets, are among AIC’s priority objectives. Overall, 2014 has been particularly good for AIC. Baku Shipyard, a half billion-dollar project, jointly owned by SOCAR, AIC, and Keppel Offshore and Marine, has evolved into the largest and most advanced facility of its kind in the Caspian Sea Basin, with three multi-million-dollar contracts secured since its inauguration in 2013. Under these contracts, with a total value circa $450 million, the shipyard is undertaking the construction of two floating pontoons, a subsea construction vessel, and three 80-seat crew vessels. Another project is with Holcim (Azerbaijan), which produces high quality clinker and cement that is widely used in large-scale construction works and the implementation of energy projects. A standout investment outside of the non-oil industry we have made is with Saba Group. It is involved in all stages of food manufacturing and processing, from production of raw ingredients to the delivery of finished products. It is one of the major poultry products suppliers currently producing over 13,000 tons of poultry per year and 150 tons of dairy products on a daily basis. Well over 1,000 people work for Saba Group companies across the country. AIC’s investment of approximately $15 million has helped the company to diversify its production, and expand into a new area of operations. Saba Group recently acquired 4,800 hectares of land, and launched Garabagh Wheat Ltd, the first privately owned pilot cereal crops company in the country. By using the most advanced PIVOT-irrigation system, it has reduced its water consumption and achieved successful harvesting of wheat and corn with average yields of 5.3-5.5 tons per hectare and over 10 tons per hectare, respectively.

The majority of FDI is still focused on Azerbaijan’s energy sector. Which areas of Azerbaijan’s non-oil sector have the most investment potential in 2015?

The project Azerbaijan 2020: Vision into the Future sets out some strategic targets including to double GDP per capita to $13,000 (in 2013 it was $7,912), and increase non-oil exports to $1,000 per capita (in 2013 the figure was $200) by 2020. The project also aims to achieve higher standards of living and lower poverty levels through government investment in education, healthcare and cultural, and social institutions. The growth rate of the non-oil sector was 7% in 2014 and made up 61% of GDP. It is also quickly gathering momentum in terms of attracting investment. We welcome international businesses and have established a liberal investment climate with few restrictions. Azerbaijan is a party to major international investment agreements and has signed 47 bilateral investment treaties and 44 double taxation treaties. Over $172 billion has been invested in Azerbaijan in the last 10 years, nearly $84 billion of which constitute FDI. The FDI share in the non-oil sector has exceeded $35 billion, with the bulk of overall FDI placed within the industry sector making up 56.2% ($4.133 billion), followed by construction and production of construction materials on 15.7% ($1.15 billion), services on 13.1% ($963 million), and transport on 9.7% ($716 million). AIC has prioritized areas that coincide with sectors targeted by the government. Non-oil industry, agriculture, tourism, logistics, and ICT are among the most promising sectors of the economy.

In what ways has AIC contributed to the Year of Industry in Azerbaijan?

Since October 2014, AIC has organized and managed the operations of industrial estates, and designated industrial compounds where SMEs are provided with the necessary opportunities and infrastructure to produce goods and services. On December 15th, AIC signed an MoU with the US-based SouthWest NanoTechnologies, Inc. (SWeNT), to start a long-term cooperation in the mass production of Carbon Nanotubes (CNTs) in Azerbaijan. The project will be located at Sumgait Chemical Industrial Park and initial production scale is expected to be 1,000 tons per year of CNTs, starting in 2016. CNTs are advanced, stable, nanomaterials that can enable groundbreaking new applications in a range of materials and devices. We are also in talks over a pharmaceuticals production project, which will be a completely new industry for Azerbaijan.

With the 2015-20 State Program on Industrial Development of the Azerbaijan Republic having now been endorsed by the President, what new opportunities are emerging?

One of the priorities set in the State Program is the expansion of a competitive heavy industry utilizing domestic raw materials. In recent years, sufficient cement output has been achieved to cover domestic consumption using locally sourced raw materials. It is also necessary to allocate advanced-technology driven production, especially in the development of base materials in the metallurgy and petrochemical industries. Moreover, the development of metallurgy will improve the raw material supply to the newly established shipbuilding industry, improve competitiveness, and create a suitable environment for the development of the engineering industry. New production facilities in the chemical industry, metallurgy, machinery and equipment manufacturing, and alternative and renewable energy paraphernalia are now gaining momentum. The establishment of new high-tech facilities has also been prioritized with new opportunities for the expansion of electronic equipment manufacturing being carefully considered. High-tech industries require an extensive R&D platform, and we are concentrating on a limited number of businesses specializing in this. The development of industrial demand is in a transition period from the import-substitution industrialization strategy to export promotion. The production supplying local demand is lacking the capacity to reduce the cost, and there is an unattainability of long-term high growth rates in the domestic demand. Industrial diversification requires the establishment of new alternative production capacities, alongside some conventional industries. The development of the necessary infrastructure facilities for supply and storage of agricultural products is seen as a potentially beneficial area for investments. Additionally, an increasing number of areas in the services sector are promising in terms of the availability of resources and infrastructure. Construction of a new international sea trade port is to become the largest seaport facility in the Caspian basin, and sets a potent showcase for further investments.