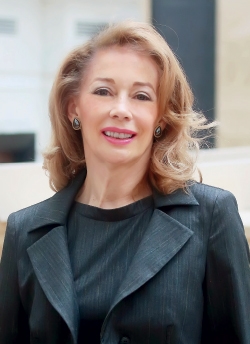 Doris Bradbury joined the American Chamber of Commerce in Kazakhstan as Executive Director in May 2006. A career specialist in the countries of the post-Soviet Union, she began her career teaching at the University of St. Andrews in the UK before embarking on international work. She has broad experience in Canada, the US, Russia, and Kazakhstan, and has an educational background in Russian literature and history.

Share on:
We last spoke with you for our 2012 edition. How has AmCham’s role and membership changed and developed since then? As far as our role is concerned, we have worked […]

We last spoke with you for our 2012 edition. How has AmCham’s role and membership changed and developed since then?

As far as our role is concerned, we have worked hard on advocacy for our members. Our ability to advocate strongly is continuously evolving, as is our relationship with senior levels of the government of Kazakhstan. We aim to work closely with the government, mainly through our regular meetings with the Prime Minister and cabinet ministers, to express our opinions and our members’ opinions. We also coordinate, cooperate, and are supportive of government initiatives such as the green economy and healthcare reform, working together with the ministers responsible for these initiatives. AmCham’s membership also changes from year to year. This is a healthy phenomenon, and something we work at to achieve. There are always new members joining, while others may be leaving the country or downsizing. The membership now consists primarily of large companies; however, with a healthy mixture of SMEs. This reflects the current situation in Kazakhstan, as it is difficult for entrepreneurial start-ups and small companies to operate, and many do not last long. Larger companies inevitably have greater experience and resources, and many have operated in Russia and Ukraine or elsewhere in the CIS. This enables them to successfully navigate the difficulties common to this region. The government has set the goal of economic diversification, aiming to promote and support entrepreneurship, but the business environment is still extremely difficult for small businesses.

What do you think needs to be done to make the environment more inviting for smaller businesses?

There needs to be a realistic effort to open up the business environment for small companies, to encourage fresh ideas and innovative approaches, and to fill niches presently unoccupied. Instead, a lot of pressure is brought to bear from the tax authorities and financial regulation. Corruption and bribery is also a continuing problem. Small companies find it difficult to fight corruption since they don’t have teams of lawyers or deep pockets to sustain battles against bureaucracy and the courts. This is not a problem only for SMEs, but also for the larger companies that feel struggles of this nature distract them from their priority to build a healthy business. As for tax disputes, these are common in the corporate environment of many countries, but they are dealt with differently here. In Kazakhstan, such disputes are criminalized very quickly. The accepted practice in developed countries is to negotiate to resolve such disputes. Kazakhstan should adopt this approach, which would save time in finding an equitable solution without resorting to the criminal courts.

What action has the government taken to improve the business environment?

The government speaks a great deal about improving the business environment, but change is slow to come. A major plus is that corporate taxes are decreasing year by year, but legal and judicial reform has not progressed sufficiently and labor legislation, particularly relating to visas and work permits for foreign staff at foreign companies, creates major difficulties. Local content, meaning services, supplies, and staffing, is being pushed hard. The intention is to promote local businesses and to increase local employment, but quality and expertise are not always at the desired level. Of course, foreign companies would be more than willing to source their supplies and services from local suppliers, because it would entail significant savings. However, sectors requiring a high level of technological or other expertise, such as the oil industry, require top-quality equipment and services. They cannot operate otherwise. These companies have asked the government for more time to allow local companies to meet international standards and to train the specialized engineers needed for these industries. Another point of concern is the recent formation of the National Chamber of Entrepreneurs, created by the government last summer and entailing mandatory membership for all businesses, large and small, foreign and domestic, operating in Kazakhstan. This will create a chamber with over 1 million members. The largest members, defined as those with revenue of over $20 million per year, a modest threshold for a company that will encompass many AmCham members, will be required to pay annual membership fees of $50,000. The stated intention is to support small businesses; however, it is not clear how this will be done. The chamber also has a quasi-political structure that appears more of a step back into the past than forward into the future. It remains to be seen what will come of this new government initiative, which will fully enter into force in 2015.

AmCham works closely with the government via the Prime Minister’s Council to Improve the Investment Climate, a body created specifically for AmCham as the leading foreign investors’ business association in Kazakhstan. How has this partnership contributed to a more enticing environment for investors?

The Prime Minister’s Council is a unique creation by the government and a great platform for dialogue between senior government policymakers and the business community. With regard to ongoing investor issues such as taxes, legal problems, and environmental and labor issues, we have brought up all of those subjects and begun serious debate on them. Each meeting consists of presentations by leading AmCham member companies, the five ambassadors from the US, the UK, the EU, Canada, and Switzerland, who are also part of the Council, and the ministers who are invited to attend the Council when a topic falling into their area of responsibility is up for discussion. There are many talented policymakers in the government; however, progress is sometimes slow. Compared to other countries in the region, Kazakhstan is an excellent model for development, and this openness to dialogue is one of the country’s most attractive characteristics. Foreign businesses that have been operating elsewhere in the CIS for a decade or more say it is easier here, and that Kazakhstan has a more open business environment, despite being a smaller market compared to Russia, for example.

AmCham held the Economic Policy Forum on Healthcare Reform in 2013. What opportunities are open to foreign investors in this sector?

Healthcare is a priority area for development in Kazakhstan, and business can play a positive role in this. Updated medical schools and medical education is very much needed, but technology, management expertise, public health strategies involving new taxation approaches, and legal reform to rethink the responsibility of healthcare to the public and to private healthcare institutions are all needed. Kazakhstan inherited a Soviet health system that fell into decay. The government now devotes significant resources to improve and refashion healthcare, but this is a sensitive area that is a work in progress. Most people here, if they can afford it, still go abroad for medical treatment. This needs to be rectified, and the business community can help. The AmCham healthcare sector of the membership has grown significantly in the past few years, and many companies that had not previously considered health a growth industry have now prioritized it for the years ahead.

What does the future hold for AmCham?

AmCham grows year by year at an average rate of 20%, and our membership diversity continues to increase. I am personally quite internationally attuned, so I constantly look for countries and companies not currently represented by AmCham. I would love for it to become a UN of businesses. In addition to our traditional North American and European membership, I am glad to see that the Asia Pacific is growing, and by that I do not mean just China, but also the presence of companies from Japan, Korea, and Australia, plus firms from the UAE and many Turkish companies. It is a good mixture, and we find that we are all on the same wavelength when it comes to the issues that are of concern to us.