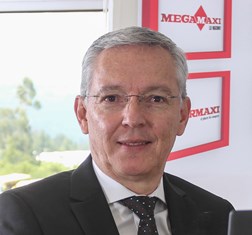 Rubén Salazar Zuther has been part of Corporación Favorita for 33 years and held various positions before becoming corporate manager in 2013. Now responsible for relations with the government, he is also the company’s official spokesperson. He is in charge of social and environmental responsibility, whose main pillars are education, entrepreneurship, innovation, and the relationship with the environment.

Share on:
A series of large acquisitions coupled with its commitment to invest USD150 million per year into the national economy make the firm more important to the nation's economic health than ever.

Could you tell us more about your commitment to invest USD750 million and create 6,000 jobs over the next five years?

At the beginning of 2018, we committed ourselves to an investment of USD750 million over the next five years, with the goal of creating 6,000 new jobs. That means USD150 million per year to create around 1,200 new jobs annually. In 2018, we invested USD170 million, creating 1,200 direct jobs in the provinces of Carchi, Cotopaxi, Tungurahua, Azuay, Manabi, Los Rios, Guayas and Pichincha, not including the significant increase in temporary jobs each year in December. Among the 21 main projects that we implemented, there is the expansion of the distribution center in Amaguaña, the development and implementation of MAX software, the construction of multiplaza shopping centers in Tulcán, the first stage in Quevedo, and Plaza Batán in Samborondón. A series of projects of similar magnitude and investment amount is already under development by 2019. The commitment to invest USD750 million in our country is separate from our recent acquisition of a large shareholding in Grupo Rey.

In November 2018, you reached an agreement to acquire control over Grupo Rey, a leading commercial chain in Panama. Could you tell us more about that acquisition?

Foreign investments are not new to Corporación Favorita, and we already have a presence in Costa Rica, Colombia, Peru, Chile, and Paraguay with different concepts. The purchase will open a range of opportunities to increase the local production and export of Ecuadorian products and services. This will mean a new source of income and allow Ecuadorian talent to transcend borders. This productive investment has international financing, which reflects the strength of the company and broader confidence in Ecuador. Corporación Favorita will acquire the majority of shares in Rey Holdings and its subsidiaries, including its shares on the Panamanian stock exchange and its Rey, Romero, and Mr. Precio supermarket brands and Farmacias Metro and Zaz chains. Grupo Rey has an annual turnover of around USD700 million, and its acquisition is one of the most important milestones in the history of Corporación Favorita. The transaction will open the doors of the region to the Ecuadorian company and its entire value chain, allowing Ecuadorian products from value-added industries that are competitive in this new market to have new opportunities. Grupo Rey is currently the most recognized commercial chain by Panamanians and has a portfolio of 51 supermarkets, 76 pharmacies, 17 convenience stores, and three large production and distribution centers in Panama.

What values drive your company’s growth?

Human talent is a priority at Corporación Favorita. We encourage our employees to grow hand in hand with the company beyond the benefits and tangible values. For this reason, jobs at Corporación Favorita are in high demand, and we receive more than 13,000 monthly applications. We recently obtained the seals Hace Bien and Hace Mejor, certifications issued by the Ministry of Production, Foreign Trade, and Investment for our great corporate social responsibility practices.

What will be the impact of the new investment legislation?

It is important that the national government promote private investment, and many companies have pledged to support the new legislation because it will spur the economy. With more employment, a higher national income, and more purchasing power, our business activities will also grow. At Corporación Favorita, we are also analyzing how to create jobs through investments. The construction of new premises requires a large number of qualified labor. The new projects of our different branches inject capital into the national economy, generating a fair amount of indirect employment.

What are the ambitions and plans of Corporación Favorita for 2019?

We continuously monitor the behavior of the market and have recently seen renewed growth in the commercial sector and a recovery in sales. Inflation remains at low levels, which is positive, although fuel prices are rising. All these factors will help to maintain the economic stability of our planned investments.