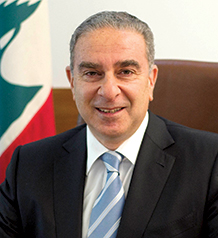 Home Away From Home

HE Michel Pharaon was born in Beirut. He received an Economics Degree from St. Joseph University in 1980, followed by an MBA from the University of Paris in 1981. As well as being a Member of Parliament and the Minister of Tourism, he heads the Board of Directors for Mednet Insurance Company and Commerce du Levant magazine. He is Deputy President of the companies Ruphayil Pharaon and Sons, and Pharaon Holding.

Share on:
TBY talks to HE Michel Pharaon, Minister of Tourism, on the most important initiatives promoting Lebanon as a tourist destination, and the sector's untapped potential.

How do you assess the last year in terms of overall tourism activity and what do you expect for 2015?

Stability has facilitated activity, which has grown since June and July 2014. Tourism has increased almost 25%, which was the highest rate in the region. Of course, this increase has come after a substantial deterioration between 2011 and 2014. We have also recorded even higher rates of Lebanese living in the Gulf region, Europe, and Africa returning home for vacation, who were not visiting in large numbers between 2012 and 2014. Both foreign tourists and the Lebanese are coming to Lebanon for the holidays. We can say fortunately that we had a high rate of increase despite a sluggish or difficult political situation. Lebanon has a degree of immunity to political problems. Of course, the threat of terrorism is present all over, but in Lebanon our security forces have managed well.

There has also been excellent activity in restaurants and exceptional activity in civil society; non-governmental agencies and the private sector have a remarkable dynamism, which prove that Lebanon is rich in terms of civilized values, liberty, and culture. There are more than 100 events scheduled between July 15th and the first week of September. Tourists are very much influenced by Lebanese expats, so when they decide to come with their families it encourages a lot of tourists.

What are the most important initiatives promoting Lebanon as a tourism destination that the Ministry of Tourism is currently involved in?

We are working on a program for religious tourism, which should be ready by the end of 2015. We have a touristic program being designed for the diaspora, which should be ready at the end of the summer. We have a particular focus on a five-year plan for rural tourism. Today, rural tourism doesn’t represent more than 8% of tourism in Lebanon, but it has the potential to increase within three years to reach 20%. We also have an ambitious program, which was launched by the UN World Tourism Organization, called the Road of the Phoenicians. This is being designed modeled on the Silk Road. We are also focusing on medical tourism. We aim to control, evolve, and monitor traditional tourism, conferences, businesses, shopping, the central district, and traditional mountains. We are building programs for medium- to long-term benefit, and even if there is another downslope in the sector, we will continue to work because the potential of tourism in Lebanon is very big whether it be leisure, adventure, cultural, conferences, and we are preparing the infrastructure.

Where do you see the untapped potential in the sector?

Of course, 2016 will reap the benefits of the work we are doing in 2015. One of our projects is Byblos, the Arab tourism capital, which would benefit all of the bay regions. The main challenge is the road infrastructure needs to be improved. These regions have a lot of potential. In 2016 we plan to have an Arab Tourist Minister in Lebanon and to have programs ready. We are planning a mini conference for tourism in Lebanon in 2016, either in the first or second quarter. Some of the regions are being developed, for example the Beqaa Valley has huge potential. Even some regions that are handicapped by security fears, especially on the border with Syria, we encourage these regions to organize themselves for future potential. We are working now on Tripoli, where I plan to organize a visit with journalists. We are doing some work on regional cuisine as well. NGOs have been creating programs geared towards young people. Another challenge is we need to change the mentality of the tour operators. Between 2011 and 2014 they sold outside of Lebanon. We need to make a huge effort to promote and sell Lebanon.