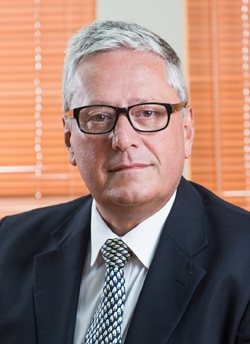 David Gledhill has spent 35 years in the ports industry, previously as CEO for Hutchinson Ports UK and COO at Felixstowe Dock and Railway Company, prior to joining APM Terminals and his appointment as CEO of the Port of Salalah. He has held senior positions in Germany, the Netherlands, Belgium, Luxembourg, and Portugal.

Share on:
"Our key contribution to helping the local economy to grow its exports is to ensure the right infrastructure is in place."

The Port of Salalah has been ranked among the world’s top container ports. What factors are at the root of that constant growth?

There are a number of factors that come together for the Salalah growth story, and the factors that propelled the port’s growth over 15 years ago cannot be the same going forward. Our strengths will need to continuously change and mature with the times. Nonetheless, at the core here is location and connectivity. The Port of Salalah runs the lion’s share of container services calling at Omani ports, and connectivity is always integral for customers and cargo owners who are seeking lean supply chain solutions. Shippers can save on costs primarily on the back of Salalah having the least deviation time from the main Asia-Europe trade lane in relation to competing ports in the region. Furthermore, this port was breaking world records in productivity in only its second year of operations, and until today this port ranks the third most productive port in Africa, the Middle East, and Europe. This entails having the resources and the people necessary to keep up productivity. But looking toward the future, Salalah’s growth also relies on hinterland connectivity to regional markets and the acceleration of the free zone. Today and for the near term, growth is happening not on the container side but at the general cargo terminal. Specifically, the booming sector has so far been the export of limestone and gypsum mined locally, and that is a major growth area for the next few years.

How are you playing into the opportunity to grow your exports?

Our key contribution to helping the local economy to grow its exports is first and foremost to ensure the right infrastructure is in place to support volumes and growing volumes. To that end, we have built four new berths that are designed with specific handling capabilities for liquid, bulk, and aggregate cargo. The capacity that we are creating now should enable us to cope with the growth in that market for the next 10 years or so.

“Our key contribution to helping the local economy to grow its exports is to ensure the right infrastructure is in place.”

How do you differentiate from the ports of Sohar and Duqm?

In the past few years since Sohar’s inception, Sohar has been primarily involved in general cargo imports and exports for the country, while Salalah has focused on the container transshipment business. As time goes on, Sohar’s share of container cargo will increase, while at the same time our general cargo capabilities and volumes will rise. Eventually we will be good at doing similar services but from different locations, and at that point we really need to differentiate our offerings based on the services, natural resources, and markets each port connects to. That is what we are working toward alongside the government and other Omani ports so that we ensure we are not competing but complementing our unique growth stories. Oman needs for all of its ports to be connected in order for its national economy to grow. As we are talking about containers, Salalah needs to move away from the purely transshipment business and shift toward more import and export, which is referred to in the industry as a gateway. I think that the most exciting development that will enable Salalah to grow its domestic cargo share is the railway. In fact, some people are talking about starting it from Salalah because 40% of the cost of the railway line within Oman is the section between Thumrait and Salalah. If we can improve the transport links from Salalah to the rest of the Gulf region through the railway and maybe some investment in the roads, it gives Oman a great opportunity. If a shipping line can avoid going through the Strait of Hormuz into the Gulf, there are a lot of savings to be had, but the only thing that stops them from doing that now is the lack of infrastructure to feed the cargo. So, in my opinion, starting the railway infrastructure from Salalah would be the best thing that could happen for Oman.

How long do you think it will take for government officials to see that as well?

We are talking about it as often as we can, to as many people as we can. I believe we already won the discussion about whether the railway line needs to come to Salalah, as the cargo is already there for the trains to carry.

How would you assess the potential of the port as cruise terminal?

The basic infrastructure to support a good cruise terminal and a good cruise destination is already here; it just needs promotion and organization. Together with the Ministry of Tourism we are doing just that. We are investing in a new tourism center specifically for cruise vessels which will be located at the port. But we also need the rest of the tourism sector to realize that there are other things for tourists to do when they get to Salalah because it is just fantastic during the Kharif season. Still, we need to extend the tourism season throughout the rest of the year, and the port will do whatever it can to assist in that. The cruise offering in the past was not particularly good, but now we have a far stronger offering. It is still in its early days, but I think for Salalah it is probably a quick win; the more cruise vessels we can get here, then the more tourism we can get into the town, and the more money generated for the local economy. That would also boost SMEs and extend the tourism season outside the current two months. We need to do more in terms of people and we need to have the right people from our organization promoting tourism. There is a plan to build a new breakwater in Salalah that will have a cruise terminal on it, and we are still in the breakwater design stage. The primary reason for the breakwater is to protect our quays from the weather during the Kharif monsoon season. There is a phenomenon called “long waves,” which impacts the port’s safety and productivity, so having a breakwater for our existing business is vital.

What is the port’s current Omanization rate and what are the challenges?

The rate is around 60%, so it is relatively high. There are two or three grades of job that are mostly manual labor, which are performed by expatriates, but most of our crane driver jobs are performed by Omanis. The main challenge is to encourage Omanis to do jobs that are not managerial. For us to achieve 100% Omanization, we need Omanis to realize that there are a lot of jobs available, which, despite appearing less attractive, provide an opportunity to grow within the port. It is not easy, and not everyone is going to move from being a vessel lasher to be a crane driver, but they are well-paid and long-lasting jobs as the port is going to be there for a long time.

What are your priorities for 2015 and where do you see the port in 10 years?

My number one priority at the moment is to try to find ways to mitigate the Kharif challenges, and that is to some extent possible via technology and better ways to moor a ship. The long-term priority for the port is the breakwater, and that is the 10-year aim. We also need to promote Salalah as a gateway port; a gateway to Oman and the Gulf region, rather than just a hub or a transshipment port. That is the objective for the next 10 or even 20 years.