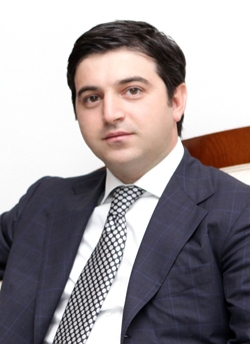 Chairman of the Board, Garant Holding

Anar Mammadov was born in 1981 and attended American Intercontinental University in London graduating with Bachelor’s and Master’s degrees in Business Administration. Mammadov has been working with ZQAN Group since 2005, and guided its rebranding as Garant Holding.

Share on:
"Azerbaijan is a country with a range of available opportunities and conditions for the development of entrepreneurship."

How would you evaluate Garant Holding’s performance in 2013?

I am happy to say that 2013 was one of the most successful and productive years in our history. We rebranded the holding with a name more readily understandable in many languages and quickly associated with the various companies that operate under the corporate umbrella. Taking on this new name has galvanized our sense of responsibility and stimulated new initiatives and projects. We are the only holding in Azerbaijan to have been recognized by PricewaterhouseCoopers, and have received ISO 9001:2008 certification from TÜV AUSTRIA Hellas, the International Certification Organization. Another highlight of 2013 was the opening of the luxury Rixos hotel in Guba, a pivotal region in Azerbaijan. By completing such projects, we are contributing to the state program for the social and economic development of other provinces in Azerbaijan through tourism facilities. The project is of considerable importance to the holding, but also to Guba, as it has improved infrastructure, involved local residents, and provided employment.

What is the focus of Garant’s construction segment?

A major success in recent years was our efficient and rapid completion of the Trump Tower project. The challenge that we embraced was to ensure that the style of the building was consistent with the surrounding architecture in Baku, and that the project was sustainable. The main challenge that we are facing now is to promote Baku effectively in the international arena. Meanwhile, the construction arm of Garant continues to work on several large-scale projects.

“Azerbaijan is a country with a range of available opportunities and conditions for the development of entrepreneurship.”

In which areas is the agribusiness branch of Garant engaged?

Garant has leveraged the success of its financial branch to diversify, having directed its efforts toward the production and manufacturing of food products. One of the initial steps we have taken in this field is the establishment of Ucar Agro LLC, named after the area in which it is based. This time, we have also remained true to the principle of the development of rural regions of Azerbaijan, employing our best people to ensure success. There are many companies engaged in poultry production, but with demand from local consumers being high we have channeled innovative technologies to meet it, resulting in the introduction of a new brand of poultry product. Our poultry processing operation has an annual production capacity of 17 million (live weight) tons with a cutting rate of 6,000 chickens per hour; it will produce fresh and frozen poultry, whole and sliced. The enterprise is valuable and of great importance in providing employment in rural communities. Overall, 590 workers have been involved directly in our production processes, and 150 people have been engaged in related fields of the enterprise.

This year has seen the start to the third term in office for President Aliyev. What will this mean for the business community?

Azerbaijan is a country with a range of available opportunities and conditions for the development of entrepreneurship. We have the opportunity to operate effectively due to the care and attention of President Ilham Aliyev. As the President has stated, the growth of entrepreneurship in towns and regions will ensure successful national development. He has underlined the need to pursue a liberal economy to this end. In recent years, through the sensible use of incoming exchange reserves from the sale of oil resources, the government has achieved the advantageous base required for the dynamic development of sectors of the economy relevant to strategic, diversified business structures and the development of the broader economy. The generation of oil revenues has contributed to this development and played a pivotal role in the formation and establishment of developmental tendencies within economic and social sectors. Of course, those engaged in entrepreneurial activity will be entering a more large-scale activity phase in large part owing to this productive environment.

As the founder of the Azerbaijan America Alliance, how do you evaluate the importance of this bilateral relationship for the country’s economic development?

The Azerbaijan America Alliance is a non-political, non-profit organization the main goal of which is to deliver broad information regarding the culture, history, way of life, and lifestyle of the country. The Alliance’s mission also includes the provision and building of mutual understanding and fostering mutual respect between American and Azerbaijani people. The alliance has arranged successful projects through academic dialogue, cultural programs, and political debates in the US over the span of several years. Our outreach campaign to create awareness of the Khojaly massacre in the US forms a major part of the goals of the alliance, and we have been attempting to convey the importance of this tragedy and crime against humanity to officials there, in order to foster a better understanding of our region’s unique geopolitical realities. This program has been focused on informing people in Washington, DC and New York, in order to achieve a high-impact message. My hope is that the Alliance’s cultural, political, and economic relations will play an important role in strengthening and promoting more productive and favorable relations.