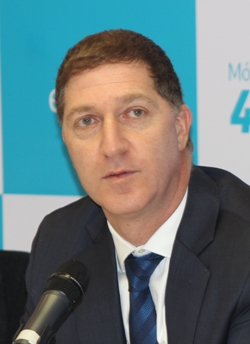 Saúl Kattan Cohen was educated at the University of the Andes, graduating as an economist, and has also completed studies in advanced management in Inalde, Colombia, and the Wharton Business School in the US. He has worked in the Banco de la República, and has served as President of Blockbuster Video, Juan Valdez Café North America, and since January 2012, of Empresa de Telecomunicaciones de Bogota (ETB). In addition, he has assessed various companies, and currently serves on the Board of Directors of Empresa de Energí­a de Bogota, Colombia Móvil, Contact Center Américas, and Colvatel.

Share on:
"It has been a long process to transform a fixed company to a mobile company."

You have just launched ETB mobile and have the ambitious target of gaining 10% market share in 2015. How will your existing infrastructure help you to do so?

This is a crucial period for ETB, a year after formation, and a year in which we celebrate our 130th anniversary. We have launched a fiber optic service into homes, namely FTTH, and our own IPTV service, and are now even launching our own mobile service; ETB Mobile. We bought a 4G spectrum in June 2013, and since then have created our own mobile company from scratch to provide nationwide coverage. We will be the fourth operator to join the competition in the local market after Claro, which has a 60% market share. Colombia is the second most concentrated mobile market in the world, after Mexico, where Claro—the Telmex group—is the leading player. Telefonica holds 25% of the market, and Tigo, owned by Milicom, has roughly a 15% market share. We will offer rates per second mobile plans, and at the best rate on the market of Ps3 per second. We expect to offer simple plans without the small print so that there are no surprises with regard to monthly usage costs for mobile account customers, for example. Meanwhile, we will focus on data. We want people to be connected at all times, which is part of our data strategy, and to establish more fiber optics to the home, which is the first stage; we have the fastest internet speed in the country and want people to be connected beyond their homes, especially with 4G, and with non-interrupted connectivity for mobile data. Therefore, all of our plans will have free access to WhatsApp and Facebook. In late 2014, fixed-line customers from ETB will receive a discount on their mobile plans and in 1Q2015 we will be completely convergent, meaning that customers will be able to see all our products and services on one invoice. They will have a quadruple play plan that provides special rates for having all ETB products, or else a diverse mix of products, which no other mobile service provider in the country offers.

How significant are the logistics and infrastructure investments that have been made in order to launch ETB Mobile?

It has been a long process to transform a fixed company to a mobile company; everything is new, IT and networks are different, logistically it is a different proposition, and even the commercial component of the business has changed. We are investing around $200 million to complete the investment, which may not sound like much for such a large project, but it results from a strategic alliance with TIGO to share infrastructure and spectrum, which helps us reduce costs significantly and rapidly access a nation-wide plan. This marks a new ETB investment across the spectrum, within the network.

“It has been a long process to transform a fixed company to a mobile company.”

The price of the company’s stocks has risen by 45% over the past 12 months; what are the conditions needed to allow for a continued rise?

Two years ago it was the strategic plan that investors were interested in, although obviously they wanted to see its execution, and for us to start posting healthy results to cement the ETB name. There is also considerable political uncertainty surrounding the company, as an 88% stake is owned by the City of Bogotá. It follows then, that certain investors prefer to see whether the mayor stays in office. The mayor’s term expires in 2015. So all of these factors may create some uncertainty and prevent the stock from rising at the rate it should. Additionally, while the stock is not particularly liquid, that is actually rather indicative of the national market in in general.

What is your outlook for the next few years in terms of potentially releasing more bonds or shares through private investors?

We have completely funded the strategic plan, which is worth about $1 billion over four or five years, and have already invested half of it, amounting to about $500 million. We have around $500 million in cash today, and are completely funded. We also have low debt of about $270 million, which comprises bonds issued in January 2013, from what was probably the best bond issuance that any Colombian company has made in international markets. We obtained a rate of 7% in Colombian pesos for 10 years, which is the historic best rate for any Colombian company. We have low debt, and a good EBITDA margin of 40%, as well as liquidity and the plans and execution needed for solid performance. We are delivering, which makes stockholders and investors faith in ETB—they take interest and continue to invest in the company.

In February 2014, ETB acquired 75% of Skynet; can you tell us what synergies this represents?

Skynet is basically a small company that offers satellite internet connections. This could be interpreted in different ways. For example, we are going nationwide with the DTH television product, though not just yet. We basically made the purchase to create synergies with our corporate enterprise and government business. There are many areas in Colombia lacking a ground connection, be it fiber or any other type, and, therefore, we have to offer satellite-based alternatives. We used to hire Skynet among other companies to provide services, but considered it a good opportunity to become more efficient and competitive in the enterprise and government business, which is crucial for ETB, accounting for about 45% of total revenue.

Regarding the investment in LT technologies, can you speak more on the technical synergies you have been promoting as part of the re-structuring?

I think this is a mixture of many factors. With fiber-to-home we have started reducing the cost of copper. We have about 40 facilities operating the copper network in the city of Bogotá, and when we complete our fiber project, that number will be reduced to 13. We will have significant copper volume to sell to the international markets worth an estimated $80 million, as well as substantial real estate, worth at least another $80 million to $100 million. The synergies are numerous given the technology in place that will boost out efficiency. Obviously with fiber there is a major synergy with the mobile business, using the fiber to offload data from the mobile networks, which will be more efficient and increase quality, while related cost declines because the fiber network is our own.

How many households have you currently reached with fiber optics and what are the projections?

We started deploying fiber less than a year ago, and at this point have more than 600,000 home passes and about 10,000 connections, while we expect to close 2014 with about 800,000 home passes and 20,000 to 25,000 home connections, which represents successful deployment for the first year of fiber. If you compare us to Telefonica in Brazil and Spain and several parts of Europe, and Verizon in the US, none of these companies reached 10,000 connections in their first year, and we will probably have doubled that number by the end of 2014. The idea is to end next year with about 80% of homes in Bogotá passed with fiber optics and to create our rate of connections significantly in 2015, and we hope to reach 130,000 to 140,000 connections, which is a major jump from the 20,000 we expect to close 2014 with.

What does this mean in terms of expanding your operations?

I believe that we have to continue sharing the network with TIGO, and in order to expand our network nationwide we must also continue investing in networks, which is the core of the business, and what we have done to date can help us obtain our targeted market share. That will have a positive impact on revenues in the mid-term, and if we reach five million customers within five years that will probably at least double the value of the company and underpin sustainable growth.