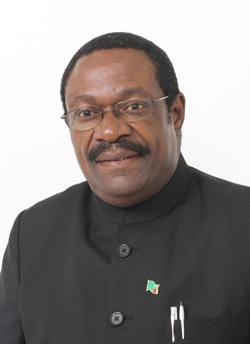 Sebastian Kopulande is the Chief Executive Officer of the Zambian International Trade & Investment Centre (ZITIC), which he established in 2009. He is a Rhodes Scholar and has an M.Phil in Management Studies from the University of Oxford. In 1993, he was elected as a PEW Economic Freedom Fellow at Georgetown University, where he studied Transitional Economics. Sebastian has worked as a Management Consultant for Deloitte & Touche and held senior management positions in various companies in Zambia. He has rich experience in Government, having served as Comptroller/Permanent Secretary at State House under late President Frederick Chiluba and later as Special Assistant to the President (Special Duties), under the late Dr. Levy P. Mwanawasa. In 2012, he was appointed by the World Energy Forum of New York as Director for the Southern African Development Community (SADC). He is a Founding Member of the American Chamber of Commerce in Zambia.

Share on:
"I think that demand is coming from all sectors, especially from the foreign investors' side."

The Zambian International Trade & Investment Centre (ZITIC) is unique, in that it sees the private sector taking on the responsibility of investment promotion. Could you tell us how you came up with this concept?

Between 1972 and 1991 the country had a socialist government, and by 1991 80% of the economy was state controlled. At that time, 80% to 85% of foreign earnings came from one industry—copper mining. Therefore, ours was a state-controlled mono-economy. In 1990, we started lobbying for a change in the constitution that would allow for a liberal economy, and the party that was advocating change won the election in 1991. One of the things that needed to happen at the time was the reengineering of the economy. After the elections in 1991, I was asked to become an advisor to the Vice-President and I left my private business, a manufacturing company, to join the government and become an advisor particularly focused on economic management. In 1993 they sent me to Georgetown University to specialize in Transitional Economics. As soon as I came back I was transferred to the Ministry of Commerce, Trade, & Industry as Director of Industry. They gave me the responsibility of developing policies that would liberalize the economy. We had to come up with new investment codes, new trade policies, new standardization policies, new small enterprise development policies and all the other policies that go into ensuring such a change. This is how we embarked on the privatization program through the Zambia Privatization Agency. In 1996 I moved to work as Permanent Secretary in the Office of the Minister Without Portfolio who is the current President. Later in 1997, I was moved to the President’s Office as Permanent Secretary/Comptroller under President Chiluba. Later when late President Levy Mwanawasa took office, I was called to serve as Special Assistant to the President (Special Duties). Over the years, what I have realized is that the government, by its nature, is structured in such a way that it is not exactly private sector friendly. It is a bureaucracy. They take their time, even if an investor is waiting or in a hurry; they will say, “come tomorrow.” An investor does not have all the time in the world, as he may have multiple business interests and commitments; he/she may be catching the next flight to the next destination, hence may not “come tomorrow.” I noticed that we had lost numerous investment opportunities because of this. When I left government in 2006, I decided that I had to do something that would help investment. Two years after I left I came up with the idea of setting up a private trade and investment center. This is where we are today with ZITIC. We are here to be a friend to investors. We help them with all the legal requirements, necessary registrations to set up their companies, and also any licensing they might need. They do not even need to be here; as long as we have their mandate we can do everything they want us to do for them.

What sectors or types of company do you see the greatest demand from?

I think that demand is coming from all sectors, especially from the foreign investors’ side. We are also providing another service, which is raising financing for local companies. There is demand on that side as well. In addition to this, we get companies that are trying to enter public sector tenders. We get companies that need representation. There is significant demand from manufacturing companies trying to offer their products in the Zambian market. They come to us to connect with local buyers. It really covers all sectors: agriculture, mining, and health. Recently, we have been contacted by UK interests who want to set up private schools here, people from China that were looking for mining opportunities, and someone who wanted a contract for optic fiber installations. So it is a broad range of demand.

“I think that demand is coming from all sectors, especially from the foreign investors’ side.”

What do you feel should be the policy priorities in terms of creating a more conducive investment environment?

I would like to see the growth of manufacturing in this country. Before this can happen, we have to see public investments in infrastructure and then attract investment into value-adding industries. The biggest export commodity we produce outside the mining sector is corn. However, the current policy mix is not consistent. For example, we are exporting groundnuts instead of exporting peanut butter, and are happy to export sunflower seeds instead of cooking oil. I do not believe there has been a strong enough policy drive to reengineer the economy in the right direction as regards value-addition. Up to now, 50 years after independence, even our main product, copper, is exported in its raw form without processing. It is incredible that such a sizeable country in terms of landmass, natural resources, and population has such huge unemployment rates. We have sufficient capacity, if we would employ the right technologies, to have a job for every single Zambian. In fact, we should be net importers of labor. At a private level, I do what I believe I should do as a Zambian to expose the country to the importance of value-adding. That is my passion. But I cannot do this on my own. I have to get the rest of the Zambian private sector on board. I have to convince them to invest in knowledge.

What domestic economic activities do you feel have the greatest export potential?

Number one is value-added agro produce. We have the environment, the land, and the climate. We have everything. All that we need is technology. In my opinion, it is the lowest hanging fruit, and this is why I want to focus on the sector. I do not think that we have to look too far. Secondly, I think that we have excellent tourism potential as long as we can maintain our reputation as a peaceful country, and as long as we can develop the infrastructure to support that sector. The latter is an area that still needs considerable investment. Once again, we have the natural resources. We have the initial force to start with. We have the wildlife. And we have to build on that. All we have to do is to sufficiently invest in order to be able to take advantage of these resources. Thirdly, we have the necessary bodies of water for us to produce enough hydropower to supply the whole region. The entire East African region is suffering serious energy shortages. That is another line of business that we can take advantage of. We also have strong winds and sufficient sunlight. I think that we just need to do a little more, get out there as much as we can and attract investment that would help us take advantage of what we have. I am not disregarding the mining sector. There is potential there, too. This country has not yet been fully explored. I think that we need to streamline our approach to the issue of mining rights and licenses so that we can ensure that serious investors come into the sector. We also have to use these sectors to empower local people. I think that these are some of the sectors that can really help to drive this economy forward—manufacturing, mining, tourism, agriculture, and agro processing.

In terms of tourism, what specific investments do you think are needed from both the public and private sector to realize this potential?

I think that the first thing that we have to sort out is essentials. Tourism means people going somewhere to see something that you have. We need a system that would bring them here. We have to make an investment in an airline. It is a critical component to the success of our tourism sector. A national airline’s impact on an economy is very multifaceted. It is not only on tourism. People do not invest in a country that they do not know. When somebody comes to Zambia as a tourist and they see the business potential in the country, they come back as an investor. However, you have to get them here efficiently and at a competitive price. Secondly, I believe that we have to invest in actual tourism infrastructure—roads, as well as hotels and lodges. We have to understand the terrain and explore what is available. For example, the Samfya area is exceptional, yet it is currently unknown in tourism terms. We have the Victoria Falls, but it only takes an afternoon to see the waterfalls and that’s it. A tourist wants to go on a holiday for one or two weeks. So we need to take them to Samfya’s beaches, which have the whitest sand in the country and on the continent. However, we do not have the facilities or infrastructure to introduce tourists to this area.

Do you think that Samfya is currently an investable destination?

Yes it is, and I am passionate about it. I have met with the local authorities, and they have given ZITIC a mandate, in writing, to promote it. I think that there is considerable excitement being built around it. At the moment, I am trying to build interest from within the country so that people can see its potential. Moreover, it is the right time for the outside world to know about it and to invest in it. I think it should be the Sharm Al Sheikh of Zambia.