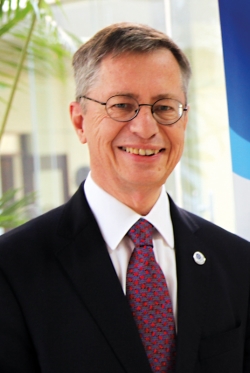 Special Envoy to the CPLP, Australia

Share on:
What are Australia’s main interests in Mozambique? In recent years the Australian government has moved to step up its role in the world given the size of the country’s economy […]

What are Australia’s main interests in Mozambique?

In recent years the Australian government has moved to step up its role in the world given the size of the country’s economy and the range of our contacts across the globe. Australia has very specific interests in multilateral organizations. We’re very present in the UN system, but there were some areas of the world that we had neglected a bit, especially in the non-English-speaking parts of Africa. We’ve now opened a few more embassies and are slated to open one in Senegal, but we needed to find a more creative way to expand our knowledge and to make contact with governments. I was asked to focus on Portuguese-speaking countries across the world, with a specific focus on those in Africa. I’ve spent the last year visiting and delivering our Prime Minister’s message about Australia and learning what we can do for or with African nations to boost relations. Much cooperation is facilitated through scholarship programs, but also, in countries like Mozambique, we have growing commercial and investment interests. Mozambique has similarities to Australia, including the geography and the significance of natural and mineral resources, such as coal. The level of Australian FDI in Mozambique has really shot up. After a slow start, there are now about 14 Australian companies investing in Mozambique, and there are others coming all the time to have a look. We know Mozambique very well because we worked closely with its people during strife toward the end of the apartheid system, in which Mozambique was a frontline state. The level of trade is $420 million a year, but that can only increase. It’s heading in the right direction.

We think we can be very helpful. Our former Foreign Minister Kevin Rudd signed a Memorandum of Understanding (MoU) covering our full range of cooperation with Mozambique at the African Union (AU) Summit in Equatorial Guinea at the beginning of 2012. That document provides the priorities for our activities in Mozambique and includes aspects such as food security, which is the biggest part of our work in Africa. The bilateral agreement with Mozambique also outlines development in all sorts of areas, including water, sanitation, and mining. This is not just about helping with extraction, but building a modern mining sector. We’ve now sent quite a significant number of Mozambicans to do courses in Australia or on study tours. We hold a big event called “Africa Down Under” every year, which brings the African mining sector to Perth for a large conference. Mozambique has been an important participant at the conference. This is a real pillar of our relationship with Mozambique. Obviously, there is mutual interest as we want Mozambique to be an attractive place for Australian companies to invest and the authorities here also want Australian companies to invest in Mozambique. During 2012, through our support five Mozambicans attended the International Geological Congress.

What is your outlook for Australia’s relationship with Mozambique?

When you decide to move to a deeper relationship with another country it takes a while to discover each other’s priorities and how you are best suited to work together and how you might add some value to the deal. You start off thinking that you can do everything and are very ambitious, then you start to refine things and look at the details and do things that really add value. That’s more than just offering 20 scholarships and saying “take your pick.” We obviously offer education opportunities, but we also offer much more tailored opportunities. We’ll have much more substance to what we do in the future. In an ideal world with an unlimited budget we would have a couple more embassies in Portuguese-speaking Africa. I am confident that will eventually have a bigger, permanent presence.