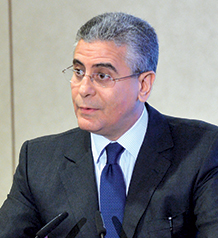 Ferid Belhaj assumed his current position on September 17th, 2012, taking charge of work programs in Lebanon, Syria, Jordan, Iraq, and Iran. Prior to assuming his current post, Ferid Belhaj served as World Bank Director for the Pacific Region (2009-12), Country Manager for Morocco (2002-07), and as the World Bank’s Special Representative to the UN, New York. Belhaj joined the Bank in 1996 as a Senior Counsel in the Bank Legal Department, and has served as Bank lawyer for various countries. Prior to joining the Bank, Belhaj was Deputy Chief of Mission at the Tunisian Embassy in the US. He holds a Master’s degree in Constitutional Law and Political Science, and a Master’s in International Law, both from the Faculté de Droit de Paris II. He authored a third Master’s thesis on Arab-African development cooperation, and a Master’s thesis on the Duality of the Executive Branch in the Tunisian Constitution. He is a graduate of the Harvard Business School New Leadership Management Program.

Share on:
TBY talks to Ferid Belhaj, Director of the Middle East Department of the World Bank, on tackling corruption, the Bisra Dam, and the integration of Syrian refugees.

According to Fadi Saab, Chairman of the Lebanese Society for Quality, the annual cost of corruption in Lebanon amounts to $6 billion, equivalent to 12% of country’s GDP—how is the World Bank supporting anti-corruption initiatives?

Generally speaking, Governance and transparency to serve secured and faithful transactions are the main underpinning of the World Bank Group’s engagements worldwide. Safeguards and rules are devised by the management of the World Bank and approved by its Board of Directors. Each of the countries in which we operate is represented on that board, meaning each rule and regulation is owned by the countries where we operate. Therefore, we are not imposing rules on member countries, but rather implementing rules, regulations, and guidelines that have already been approved by representatives of the 188 member countries. Through our operations and financing, we aim to build the capacity of the government agencies with which we work, and to do so by instilling transparency and predictability in our procedures and processes. Subsequently, those agencies are exposed to the makings of good governance. Our main thrust is to build long-term capacity of local institutions. We need to provide institutions with a sound basis for their business. This is important, because when foreign and local investors weigh the risks of investing in a certain country, they need to be confident of predictability, transparency and accountability at all levels. The Lebanese Minister of Finance has lately taken a strong public stance on corruption. He has mentioned in no uncertain terms that the system as it is functioning today is inefficient, and works to the detriment of the Lebanese people and Lebanese institutions. He stated that the presidential vacuum is taking a toll on all institutions, and that consequently Parliament was rendered ineffective and unable to perform its basic legislative duties. He is looking aggressively at addressing the corrupt practices that seem to be plaguing the system, and he cited the energy sector for instance as one of those areas where more needs to be done.

The World Bank recently granted Lebanon a $474 million loan for the construction of the Bisri Dam aimed at improving water supplies in the country. What is the significance of this project?

This is the largest project that the Bank has ever financed in Lebanon. When this project is finished, it will give potable water to 1.6 million people in Greater Beirut and Mount Lebanon. These citizens represent 45% of the Lebanese population. This will make a major difference in the way Lebanon manages its water potential. This is a country that is extremely blessed with water resources and should not be experiencing supply shortages. However, till now, its water resources have not been properly governed. In an ideal world, Lebanon should be able to export water to neighboring countries. The new project will have transformational outcomes, by establishing new, comprehensive systems for water treatment, distribution and management. It is part and of a package of projects in Lebanon that the Bank has been financing for a few years. It is a huge infrastructure undertaking, which will take six or seven years to be complete, and another year or two for it to be operational.

What can be done to better integrate the Syrian refugees into the Lebanese society?

We need to keep pushing for lateral and bilateral donor financing. Donor countries, regional and international financial institutions need to see the situation for what it is, and engage with Lebanon. The fact is that whatever money, infrastructure and natural resources Lebanon has are inadequate to cater for 5.5 million people on its soil. Lebanon has been providing the world with a global public good by opening its borders. Imagine if Lebanon had closed its borders, how much different the situation would have been for those people. Lebanon is sparing the refugees a tragic fate, and also easing the pressures more affluent countries would have had to shoulder. Lebanon cannot continue to pay for the good it is providing.