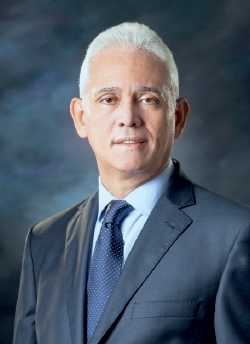 Eduardo Quincoces studied mechanical and electrical engineering at the Universidad Autónoma de Santo Domingo, and subsequently moved on to become professor of electrical machinery at the same institution from 1979 to 1999. In the field of energy and regulation, he has participated in a variety of courses and events, including the 17th seminar on the energy economy in Guatemala, the “Infrastructure in a Market Economy“ course at the Harvard University, and the 17th congress of the world energy advisory in Houston, US. He has played a major role in the development of the electricity sector in the Dominican Republic, and has been involved with the Superintendency since 2004.

Share on:
What role does the Superintendency play in bringing together the economic growth of the country and increasing demand for a more secure generation and national distribution of electricity? The General […]

What role does the Superintendency play in bringing together the economic growth of the country and increasing demand for a more secure generation and national distribution of electricity?

The General Law on Electricity was passed in 2001, the same year in which the Electricity Superintendency was established, and this law was modified in 2007. The Dominican Republic is rapidly growing, which poses certain challenges from an energy perspective, as the country has to distribute the energy needed to numerous industries, not least of which is tourism, to carry out their activities and contribute to the development of the country. On the other hand, the country has experienced an improvement in the generation and distribution of electric energy since 2001; around 800 MW of installed capacity in different plants has shifted toward more efficient generation practices. In terms of projects and policies, the most important is the tender process for two coal-fired plants set to generate electricity with a joint installed capacity of 600 MW. For example, there have already been some projects and proposals to increase installed capacity, such as a 300-MW facility based on coal in the Itabo Industrial Park. Additionally, Law No. 5707 sets out a certain amount of subsidies for those projects related to energy generation from renewable energies.

How does the Superintendency work to balance the demands of distributors for increased electricity tariffs, with the consumer demand for more inexpensive energy?

Setting electricity tariffs has to be done according to a particular technical scheme based on how efficient companies are, and the government has developed a plan accordingly; however, it has yet to come into force. Such development is still pending, and one of the main challenges we face is to incorporate the retail electricity market into this scheme. Regarding the consumer dimension, the general law on electricity stipulated the establishment of an Office of Consumer Protection, or PROTECOM, in each of the main urban areas of the country. Currently, the Superintendency has a presence in 17 provinces of the country, and we expect to open around 14 additional offices to ensure national coverage. PROTECOM enables consumers to resist the monopolies that certain distribution companies exert in their tendered area, and the Superintendency helps to further its expansion. Basically, PROTECOM works as a bridge between distribution companies and consumers who claim they have suffered from bad service or practices. PROTECOM investigates claims and disagreements between the two sides, as well as irregularities.

What are your challenges and goals for 2014 and beyond?

We want to render the regulatory framework well respected and efficient, passing the amendments needed to strengthen it. We understand that the development of the sector has to be based on a strong institutional framework rather than the current players in the sector, as that could risk the future development of the industry; our goal is for the sector to sustainably grow over the course of the next few years. Additionally, the Superintendency prepared a quality standard on commercial services for consumers in March of 2012 to provide a better framework for both consumer and distributor; it aims to further increase the role of new technologies among distributors in order to better monitor the quality of their services and billing, among other goals. Its implementation had been scheduled for August 2013, but the slow adoption of technology processes among distributors has led to a postponement of the standards coming into force. Efficiency at all levels, especially in terms of the generation and distribution of electrical energy, has to be a common goal among all players in the sector.