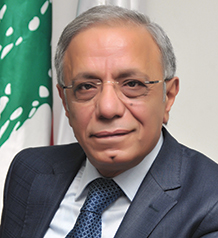 Nabil A. Itani was born in 1953. He is an architect and since 2005 has acted as Chairman and General Manager of the Investment Development Authority of Lebanon (IDAL). He was recently part of the ministerial committee appointed to amend decrees pertaining to Investment Law No. 360. He has been a key decision maker and participant in a number of legislative committees of high standing in the architectural profession within Lebanon and throughout the region. He made significant contributions to establishing the by-laws, regulations, and structure of the Order of Engineers and Architects. He is also member of the Union of Arab Architects and the Union of International Architects.

Share on:
TBY talks to Nabil A. Itani, Chairman & General Manager of IDAL, on establishing industrial cities, turning challenges into opportunities, and supporting the transition to becoming a knowledge economy.

What is IDAL’s involvement in the project to create three industrial cities across Lebanese territory?

We have carried out different studies for the development of the industrial and economic zones that are taking over the national territory, not only for these three planned cities, but also for the Tripoli Special Economic Zone and other flagship projects in the country. We identified that there is demand in the manufacturing sector; therefore, we arranged this industry to allocate a series of companies under one single umbrella that would ultimately become the industrial zone. We also identified some underdeveloped regions in the country across the south and the east; therefore, we pushed for the relocation of these industrial cities to those unprivileged areas. Finally, we are working now on setting up incentive plans to attract investment to these regions.

Amid the complexities Lebanon has faced in the past year, how has IDAL turned these challenges into opportunities?

When the worldwide financial crisis hit global markets in 2009, Lebanon was registering growth rate figures of more than 10%, and FDI reached all-time highs of USD4.96 billion. When the region was engulfed in the Arab crisis, Lebanon remained one of the few regional economies to register positive growth of FDI levels. We have managed to maintain FDI levels at around USD3 billion, proving Lebanon’s resilience and forcing us to do more as this number does not match our ambitions. The more recent challenges have been impacting both our foreign and national investments but also exports. With the closure of the Syrian border, half of our trading routes were suddenly cut. With IDAL’s main mandate to support the promotion of Lebanese goods, it set up the Maritime Lebanese Export Bridge program, or M.Leb, which essentially supports exporters in transporting their goods via maritime means to counter for the loss of the land route. This program has had a positive impact on exporters in the agriculture, agribusiness, and industrial sectors, with many companies benefiting from the government support. Recent measures imposed by some Gulf states forbidding their citizens from visiting Lebanon have had a negative impact on our tourism industry, which has traditionally relied heavily Gulf spending in Lebanon. This was an opportunity for us to tap again into our diaspora by working in partnership with public and private organizations to identify diaspora members who would either directly invest in Lebanon or support in outsourcing part of their operations to Lebanon. It is also important to note that despite the many challenges, our main duty as the national investment agency has been to continuously promote our sector-specific competitive advantages. We are starting a campaign to promote our sectors and remind investors of the many facilities available to them.

The knowledge economy sector is one of the most promising ones at the moment. How have you channeled your resources to help this sector grow?

Three years ago, we developed a business process outsourcing strategy given our belief in the potential of the country to serve as an outsourcing destination to companies engaged in ICT- related services. We carried out several roadshows to promote our location advantages. In 2016, we partnered with Berytech to promote Lebanon in the Canadian market and held a presentation and workshop in Paris for Lebanese companies to establish partnerships and business opportunities with French companies. We have tailored tax break incentives and easier licenses issue for the startup ecosystem and have partnered with incubators and accelerators to simplify the process for companies to set up companies. We are currently preparing an ICT sector event in Oman due to increasing interest in our ecosystem there.