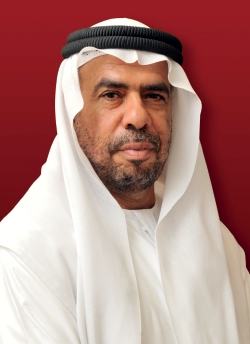 HE Rashed Al Shariqi is the Director General of Abu Dhabi Food Control Authority (ADFCA). Overseeing ADFCA’s overall strategies, he has held this position since its inception in 2005, dedicated to pursuing research that guarantees food safety and quality. Before joining ADFCA, Al Shariqi worked with the Ministry of Agriculture and Fisheries for over two decades in a number of senior positions. He holds a Bachelor’s Degree in Agriculture Science from the United Arab Emirates University (1984) and a Master’s Degree in Environmental Science — Agronomy from the UAE University (1996).

Share on:
On what is Abu Dhabi Food Control Authority (ADFCA) predominantly focused? We started in 2005 as a government entity overseeing food safety. In 2007, during the restructuring of the Abu […]

We started in 2005 as a government entity overseeing food safety. In 2007, during the restructuring of the Abu Dhabi government, agriculture was also added to our mandate. We also incorporate livestock and farming under the ADFCA umbrella. In most countries, it is easy to promote elements of agriculture; however, in the UAE, we are short on water and most of our land is comprised of sandy soil of low nutritional level. Nonetheless, the Founder of the UAE, the late Sheikh Zayed bin Sultan Al Nahyan, believed deeply in environmental protection and agriculture. The result has been an “agricultural revolution,” where we have converted sand dunes into productive land using our very limited natural resources. This enables us to sustain what we already have by leveraging technological innovation. We select crops from a long list of plants suited to our environment by being able to survive drought and salinity. That is why we introduce the best technology available and customize it to suit our own environment. Our farms are small scale—an average of between 2 and 4 hectares—and number more than 24,000, mainly distributed in the western region. These farms grow a huge amount of very diverse produce from early October/late September until May, and greenhouse technology makes for year-round production, albeit with limitations. We are an open country, and import food from more than 80 countries, with close to 90% of our food coming from abroad, which makes for stiff competition in the local market.

How do you work with local stakeholders to implement new laws?

In its eight years of operation, ADFCA has firmly believed in working closely with stakeholders. We work with our colleagues at the Abu Dhabi Environment Agency, as well as Abu Dhabi municipalities, and the Department of Economic Development, which is why our businesses are closely related. Our client is another relevant factor. We operate as a regulatory body and do not want to merely issue laws and impose them on the private sector; we want to share knowledge and experience. That is why in our strategic plan we hold stakeholder consultations for the private sector, and invite players to workshops in which we propose new regulations and seek feedback. We also have technical committees that review these suggestions and recommendations, whereupon we draft market-friendly regulations that help to promote business.

Where do you see the main opportunities in terms of adding value to food production?

There are opportunities not just in the UAE, but in every country. Nowadays, most crops are used as input for industry, and most of the world’s major producers are starting to convert food into biofuel. We used to be a self-sufficient country in regard to fish five or six years ago; however, today we import due to the growth of the population in the UAE and the local catch shortfall. UAE dates are found in over 40 countries worldwide thanks to a government-owned company set up to undertake the global marketing of this product, and today we are self-sufficient. Vegetables represent the most important part of a healthy daily diet. To produce them adequately, we rely on greenhouse technology during the hot period of July and August. During the rest of the year we can grow vegetables in open fields, even in winter. Certain vegetables cannot be grown locally, which has prompted us to examine technology that could bring solutions to problems faced by our farmers.