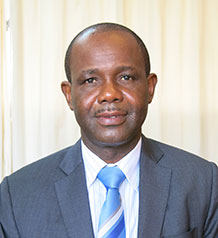 Makame M. Mbarawa has an MSc in Marine Engineering from Astrakhan State Technical University in Russia and a PhD from the University of New South Wales in Sydney. He joined Tshwane University of Technology, Pretoria, South Africa as a Senior Lecturer in the Department of Mechanical Engineering. He was promoted to the position of Associate Professor in October 2005 and finally to that of Full Professor in July 2009. His research interests are the combustion of gases, flue gas desulfurization, filtration combustion in porous media, soot formation in laminar diffusion flames, alternative fuels, renewable energy resources, and biomass combustion. Over the years, he has published 45 articles in national and international journals and presented 36 scientific papers at various conferences.

Share on:
"Rwanda, Burundi, Malawi, and Zambia all use the Port of Dar es Salaam because it is safe."

Long-term development can only be achieved through a modern and interconnected infrastructure network. What is the government’s approach to tackling this issue?

Infrastructure is an important asset for any country. There is no development or economic progress without the proper infrastructure to support it. In 2016, the government decided it wanted to build a network of state-of-the-art infrastructure for Tanzania to become a middle-income country by 2025. Our mission at the Ministry of Works, Transport and Communication (MoW) is to build this state-of-the-art infrastructure for town roads, ports, and aviation. To this end, in 2016 the government allocated TZS2.496 trillion to transport projects in the country. Some of this is going toward the building of a standard gauge railway from Dar es Salaam to Dodoma, Tabora, Isaka, and on to Mwanza, around 1,219km of track. We also want to connect from Isaka to Musoma so trains can go to Kigali in Rwanda, which involves another 361km of track. Further, we want to connect from Tabora going to Kigoma to transport goods on to the Democratic Republic of the Congo. The railway network we are going to build will have a total of 2,506km of track. Phase one will be 1,219 km of track and phases two to four will follow over time.

What other important infrastructure works are you prioritizing in 2016/2017?

Other than the rail, we want to revive Air Tanzania because if you do not have proper air transport your economy will not grow fast enough. Some businesses and products require a quick transportation service. In 2016, the budget for reviving Air Tanzania is TZS700 billion. In 3Q2016, we are receiving two new aircraft, Bombardier Q400s, from Bombardier in Canada. The Bombardier Q400 carries around 76 passengers and these two new aircraft will be dedicated to Tanzania’s internal market. In 3Q2016, we are also opening up a tender for two additional new aircraft. We want jet aircraft capable of carrying 130 passengers. Having brought new aircraft we need to concentrate on airport infrastructure first. This is the priority. Currently, we are building Dar es Salaam International Airport Terminal Three and are expanding the facilities in Mwanza. We have just finished building a new airport in Dodoma as the government is shifting there and we need to prepare the city to be our new capital. We are also building new airport terminal buildings in Kigoma and Tabora. This means we have a total of five airport projects happening under our 2016 budget. We are planning to build another three airports in Iringa, Sumbawanga, and Musoma, probably by May 2017. Every region of the country should then have a tarmac runway airport. We have allocated TZS200 billion to the construction of airports, TSZ100 billion of which was from development partners.

What are the government’s plans for new marine and port infrastructure projects?

In terms of marine transport, this is important for northern Tanzania where we have Lake Victoria, Lake Tanganyika, and Lake Eyasi. We need to develop our marine sector. In 2016, we have put out a tender for a new ship to be built for use on Lake Victoria. We have invited overseas companies to tender for this work. The ship will be for 1,200 passengers plus 400 tons of cargo. We also want to repair all our existing vessels on both Lake Victoria and Lake Tanganyika. In terms of maritime port infrastructure, starting with the Port of Dar es Salaam, this is important to the economy of Tanzania and our neighboring countries. Rwanda, Burundi, Malawi, and Zambia all use the Port of Dar es Salaam because it is safe; it provides a service to five landlocked countries that depend on Tanzania’s ports for sea access. We want to make Dar es Salaam Port a logistics hub for East African countries. Not only that, we also want to have proper connections and state of the art equipment to fulfill the requirements of a logistics hub for the region. For Tanzania, this port is the heart of our economy therefore in 2016 the government plans to spend USD250 million through the Port of Dar es Salaam for infrastructure works there. At the same time we are in negotiations with the World Bank for funding to further develop the port at Dar es Salaam. We expect to get a contribution of USD600 million from the World Bank. The first priority is to increase the depth of the port at Dar es Salaam and we also want to widen the port entrance. We want to do a lot of development work on berths one to seven and then develop a new berth 13 and 14 for container purposes. We have already put out a tender for developing a new berth number four at the Port of Mtwara, which is an important port for developing the southern part of Tanzania. Bagamoyo Port is an interesting asset. The government has been working closely with China and Oman to ensure that we modernize the port facility there.

What is your strategy for supporting the development of telecoms infrastructure?

Telecommunications is very important for any country. If you want to work effectively and efficiently you need a proper ICT system. The government of Tanzania has invested around USD200 million in building the national ICT backbone infrastructure. Every region and district of Tanzania has been connected to the national ICT backbone and Tanzania has 24,000km of fiber-optic cables, most of which was the result of PPPs, and 3G is accessible in many parts of the country. That technology can be used to alleviate the poverty problem in this country and is ultimately the only way we can minimize the gap between our urban and rural population. To this end we are investing in young entrepreneurs. For example, in 2014 we developed the Dar es Salaam incubator to foster entrepreneurship to ensure that these young innovators are part of the development of Tanzania.