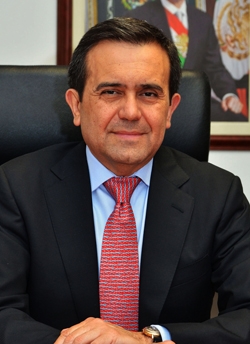 Ildefonso Guajardo Villarreal was born in Monterrey, Nuevo León, in 1957. He obtained his degree in Economics at the Autonomous University of Nuevo Leon, and later did graduate studies in Economics at Arizona State University (ASU) and the University of Pennsylvania (EBD). He was Chief Economist of the Brazil Section, and Associate Economist in the Fiscal Affairs Department at the International Monetary Fund (1988-1991) before becoming Director of the North American Free Trade Agreement Affairs Office, based at the Embassy of Mexico in Washington, DC (1994). He was appointed Secretary of Economy in 2012, having held a number of government positions, including at the Foreign Affairs Ministry, the Minister of Tourist Development, and the Industrial Development Ministry.

Share on:
"The TPP is the most important and ambitious multilateral trade framework that exists internationally for its coverage of products."

What role can science and technology play in promoting the economic growth of Mexico?

The support of scientific and technological activities, as well as of innovation, is essential in boosting economic development. President Enrique Peña Nieto realizes this and has shown his commitment to reaching a total expenditure in innovation, science, and technology of 1% of GDP. In 2012, expenditure in these areas reached 0.43% of GDP, whereas in 2013 it was already at 0.5%. It is important to create synergies between diverse economic players; government efforts should be supported by private initiatives and also by the academic sector. This cooperation should contribute to incorporating technological developments and scientific research for Mexico’s productive matrix.

What is your opinion on the study from Public Policy Laboratory Ethos, which suggests that Mexico needs a better distribution of public resources in order to achieve successful tax reform?

The government should streamline spending and allocate it to those sectors of the economy that have a real impact in terms of productivity and competitiveness. This approach is fully in line with the vision of President Peña Nieto, in the sense of promoting the efficient use and allocation of factors of production in the economy, including government spending. According to our National Development Plan, today, 46% of our population lives in poverty. For this administration, this is an urgent call to action, not only with financial discipline, but also responsible and efficient public spending, with a clear sense of social justice. The tax reform aims to promote a progressive and simpler tax system that raises the financial capacity of the Mexican state to meet its obligations through more efficient infrastructure spending, social security, and the fight against poverty. In Mexico, tax revenues represent 13.7% of GDP, while the average in Latin America and the OECD is 18.4% and 26.3%, respectively. Our public spending accounts for 19.5% of GDP, while in Latin America the figure is 27.1% and at 46.5% in the OECD. This data shows us that low tax revenues have been one of the factors curbing our spending and, consequently, the possibility of redistributing income in this way to reduce social gaps. The tax reform is to compensate for these differences and generate greater benefits, especially for those who have less.

“The TPP is the most important and ambitious multilateral trade framework that exists internationally for its coverage of products.”

How will the signature of the Trans-Pacific Partnership (TPP) economic association agreement impact Mexico’s commercial ties?

The TPP is the most important and ambitious multilateral trade framework that exists internationally for its coverage of products, spanning the disciplines and economic and commercial importance of the countries that comprise it. This agreement will give Mexico preferential access to six markets in the Asia-Pacific, and will facilitate the integration of national exports to Asian production chains, strengthening Mexico’s position as well as our role as a commercial and investment platform. In our region, the TPP will boost the integration of global value chains, which means, on the one hand greater intra-regional exports, and on the other new opportunities for joint production and exports to TPP markets, where Mexico’s exports have shown greater dynamism. Over the past eight years, exports from Mexico to the markets of the US and Canada have grown by an average annual rate of 6.9%, while in the TPP markets the growth rate was 15%.

According to IMF estimates, Mexico’s economy decelerated in 2013. What are the reasons behind this?

A combination of multiple internal and external factors was the cause of the modest growth registered in 2013. Internationally, moderate growth in the US, the slowing of productive activity in various emerging economies, and observed volatility in international financial markets were some of the factors that caused a decrease in the rate of expansion of external demand for the export products of Mexico. From a domestic perspective, the lower spending in 4Q2012 and 1H2013, resulting from the change in administration, highlighted the slowdown in domestic demand. Finally, the negative trend in the housing sector influenced the weak performance of the construction industry, which accounts for 20% of industrial activity and exhibits cyclical behavior.

What is your general outlook for the impact of the recent economic reforms over the medium term?

There are two key elements in assessing the benefits of the economic reforms implemented by this administration; the first is time, meaning how long it will take to see the constitutional reforms translated into laws and secondary regulations, and actually impacting the economy. The second element is the actual depth of the reform. Educational reform needs several years to show results fully reflected in the economic and the social productivity of the workforce. Instead, tax reform could offer more expeditious results in consolidating public finances. The labor, financial, and energy reforms have different thresholds and complexity levels. It is estimated that once the complete package of structural reforms is implemented, it will increase the potential growth of the Mexican economy from about 3.5% to 5.3% by 2018. The proper implementation of these reforms is a key element in increasing the attractiveness of Mexico as a destination for domestic and foreign investment, which will result in more formal and better-paid jobs, thereby accelerating national productivity and benefiting many Mexican families. In 2013, Mexico received a record amount of FDI at $38.3 billion, although it should be noted that a portion of this amount was due to the acquisition of Grupo Modelo by AB Inbev, which was a $13.2 billion operation. Even subtracting this transaction, the total net amount of FDI in 2013 was $25.1 billion, an increase of $7.5 billion on the $17.6 billion of 2012. This amount exceeds the average for the past five years ($20 billion). For 2014, we expect a minimum of $25 billion, and depending on the speed of implementation of structural reforms, we could be aiming for levels of $30 billion.

Could you comment on measures being implemented to curb Mexico’s informal economy?

According to the National Survey on Financial Inclusion, in 2012, 44% of the adult population (18-70 years), almost 31 million people, had purchased items through the formal financial system. This survey also revealed that approximately 43% of adults save via different mechanisms to those offered by financial institutions; they prefer saving in cash (64.8%), or participating in pools of collective savings known as “tandas” (31.7%). Also, the survey found that 33% of adults prefer informal financing through loans from the family (57.4%), or friends (40.3%). The financial reform is based on four pillars: promoting credit through the Development Bank; increased competition in the financial sector; extending credit from private financial institutions; and ensuring the development of the financial sector as a whole. The common goal of these four actions is to strengthen and increase financial inclusion among those often neglected or marginalized by commercial banks, to expand the range of financial products and services available, to reduce financial transaction costs and increase affordability of credit via competition, and to improve the quality of financial products and services by ensuring the soundness of banks.

What are your economic perspectives for Mexico for 2014?

In 2013, we experienced growth that was below the potential of our economy; however, the cyclical indicators that INEGI published recently confirmed that we are in the final stage of the slowdown and our economy is heading toward recovery. As a demonstration, the main economic indicators are beginning to show positive signs; industrial activity grew 3.4% in March 2014 and reported an annual growth of 6.8%. For the month of May, the IMSS reported an annual increase of 3.2% in employment. There has been an 80.5% (427,029 positions) growth of permanent-type jobs and 19.5% (103,289) in other types of jobs. In terms of retail, an important indicator of the state of our domestic market, April data for the National Association of Supermarkets and Department Stores (ANTAD), suggests that for stores with more than a year in operation, there was annual nominal growth of 2.4%, while total sales experienced annual nominal growth of 6.8%. By the second half of 2014, we expect to see a start in the recovery of the growth rate, which according to some organizations and economic analysts will be between 2.5% and 3% in 2014, and at least 4% by 2015.