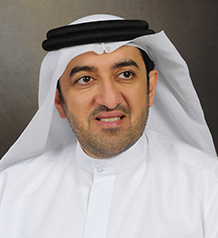 Undersecretary, Economic Affairs at the Ministry of Economy

HE Eng. Mohammed Al Shihhi has been the Undersecretary for Economic Affairs at the Ministry of Economy of the UAE since October 2006. He is involved in the day-to-day administrative functions at the Ministry and also plays an instrumental role in policy formulation and implementation, especially in highlighting the UAE as a stable and diversified economy that is diligently working to become a fully-fledged, knowledge-based economy. He is a member of the Board and Head of the Executive Committee of the Board of the Emirates Identity Authority. He is also member of the Board of the Emirates Identity Authority, Emirates General Petroleum Corporation (Emarat), Emirates Standardization and Metrology Authority, Arab Mining Company, and the Arab Planning Institute, in addition to being the head of the UAE Auditor Certification Committee and Trade Mark Committee. He also serves as Vice-Chairman of the Supreme Committee for Consumer Protection and the UAE Fencing Federation, and member of the Entrepreneur’s Forum. HE Al Shihhi holds an Executive MBA from the American University of Sharjah and a Bachelor’s degree in Electrical Engineering from the University of South Florida-Tampa.

Share on:
TBY talks to HE Eng. Mohammed Al Shihhi, Undersecretary for Economic Affairs at the Ministry of Economy, on the Emirate's economic development, the Year of Innovation, and critical growth sectors.

How has Abu Dhabi’s economy developed and diversified in recent years?

Thanks to the Emirate’s wise leadership and continuous efforts to maximize benefits from oil revenues, Abu Dhabi’s economy registered significant progress in all key areas of development. Economic development in the Emirate of Abu Dhabi in recent years has been characterized by the increased focus on channeling investments into non-oil sectors, to advance the diversification of the economic base and its income sources. This approach has been matched by government efforts to stimulate private sector involvement to contribute actively to the Emirate’s development process through laying down the foundations for an attractive and competitive business environment. The diversification strategy has succeeded in enhancing non-oil sector activities within the country. Abu Dhabi’s real GDP achieved a growth rate of 5.6% in 2012. In addition, non-oil economic activities have been experiencing stable growth rates between 5% and 9% during the period 2007-12, which in turn have raised the contribution of non-oil economic activities to the real GDP from less than 44% in 2007 to 49% in 2013. Abu Dhabi’s economy has clearly made significant strides in a short period of time and is steadily moving toward greater progress and development. The Abu Dhabi government is seeking to transform the Emirate into a diversified knowledge-based economy, capable of achieving sustainable development, as well as regional leadership and competitiveness at the global level.

With 2015 being named the Year of Innovation, how do you view the Ministry’s role in cultivating a culture of innovation in Abu Dhabi and the UAE at large?

The federal government in general and the Ministry of Economy in particular do not spare any efforts in advancing and encouraging innovation and research in the UAE. Our national agenda focuses on building a sustainable knowledge-based economy and our target is to increase the share of knowledge-based sectors to 5% of the UAE’s GDP by 2021. We are collaborating with all concerned stakeholders to enhance the business environment and support innovation and creativity. We do this through developing the country’s legal and legislative framework with the aim of creating a competitive, highly productive, and sustainable economy. A major milestone in building a competitive economy will be the launch of our National Patent Center to inspect, award, and register patents in the UAE. We believe this process will greatly encourage technological innovation and economic growth in the country and the wider region. Finally, the National Innovation Strategy, which was launched by HH Sheikh Mohammed bin Rashid Al Maktoum, Vice-President and Prime Minister of the UAE, and Ruler of Dubai in 2014, will further encourage the UAE as a whole to position itself among the most innovative nations in the world within the next six years.

What opportunities exist for partnerships, knowledge transfer, and investment into the critical growth sectors outlined in the Abu Dhabi Vision 2030?

Through our local and foreign relations, we are always working on attracting investors from developed countries. During our visits outside the UAE, we focus on establishing synergies with technological and industrial development research centers primarily in fields that are beneficial to the UAE as a whole as well as the individual emirates. The government is actively stimulating FDI, and providing various opportunities for investors, particularly in areas that contribute to the transfer of technology and expertise. The UAE Offset Program, now renamed the Tawazun Economic Program, is a huge initiative that will aid the economy. The Offset Program ensures that local capacities are built through the transfer of technologies (from foreign contractors), and opens up markets related to these specific purchases. The program has gone a long way toward diversifying the UAE’s economy and creating new ventures in various sectors by partnering with international defense contractors. To date, the program has effectively generated several multi-million dollar joint ventures in various economic and industrial sectors including ship building, district cooling, aircraft leasing, fish farming, healthcare, agriculture, banking, and education. R&D and knowledge transfer at a regional level can also help to facilitate the development of industrial and service clusters that can in turn have a transformative impact on a country’s economy.

What was the significance of the UAE’s first Economic Planning Forum held in the Emirate of Fujairah in 2014 for the Ministry’s objectives of boosting cooperation between federal and local governments from each of the seven Emirates?

This and future forums will have a major impact on the country’s national economy. The aim of these forums is to offer an advanced discussion platform for all participants and stakeholders concerned with the development of the national economy on both local and federal levels. The forums are in line with our strategy to step-up cooperation among the different Emirates. The Economic Planning Forum concept is aligned with the national agenda adopted by the UAE government and calls for better coordination and collaboration from each Emirate. We are keen to streamline our efforts on the local and national levels and advance the growth of expertise to further boost the competitiveness of the nation as a whole, and develop a successful and sustainable economy. The forums facilitate better communication among individual Emirates, which results in better planning and more cohesive policies and strategies, eventually leading to a more advanced overall economy for the UAE.

What regional economic role do you see Abu Dhabi taking on in the coming years?

Abu Dhabi is set to play a major role in a range of economic activities. In addition to the traditional oil and gas industry in which Abu Dhabi is major international player, the Emirate has emerged as a regional and international leader in renewable energy through Masdar, the home of the International Renewable Energy Agency (IRENA), the inter-governmental organization that supports countries in their transition to a sustainable energy future. Over the last few years, Abu Dhabi has made huge strides in logistics and transportation with new developments, such as the massive expansion of its international airport and the mega Khalifa Port project. The Kizad project and other investments in industry are also setting the scene for a paradigm shift in the Emirate’s economy. In the future, there will also be a much greater focus on tourism, as several more projects are expected to be completed, including the Guggenheim Abu Dhabi, the Louvre Abu Dhabi, and Saadiyat Island, among others. The Emirate’s aviation industry is also advancing with double-digit growth rates annually. Abu Dhabi is aiming to become a regional and international hub for air travel through the rapid expansion of Etihad Airways, the second largest airline in the UAE, after Emirates. Abu Dhabi is also looking to play a leading role in the regional financial services sector through the implementation of the Abu Dhabi Global Market (ADGM). Therefore, it is apparent that Abu Dhabi will play a significant role in the coming few years by emerging as a regional center for energy, logistics, transport, and also play an increasingly important role in trade, finance, tourism, and leisure.

What are the Ministry’s priorities in 2015 to further promote Abu Dhabi as a competitive, global business hub?

As a federal ministry, we work on preparing the general plan for economic development in the country through relevant laws and bills that are aligned to the overall general federal strategy. Our immediate priorities for 2015 include outlining a general economic and trade policy, identifying action plans for the policy, and implementing those plans as soon and as effectively as possible. We offer complete support to Abu Dhabi and the other Emirates through our long-standing cordial relations, international agreements, visits, conferences, and trade fairs. We coordinate with other federal ministries and local authorities in each Emirate.