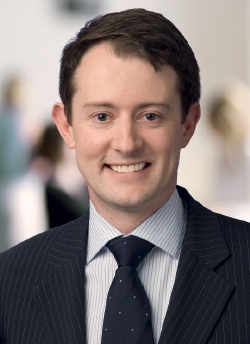 Seán Sherlock is the Minister of State for Development, Trade Promotion, and North South Co-operation. He was appointed to this role on July 15, 2014 having previously served as Minister of State, Research, & Innovation with the Department of Enterprise, Jobs, & Innovation, and Department of Education & Skills. He was first elected to represent Cork East in Dáil Éireann in May 2007. He was educated at Patrician Academy, Mallow, College of Commerce, Cork and UCG where he studied for a BA in Economics and Politics.

Share on:
Taoiseach Enda Kenny visited Saudi Arabia to discuss trade cooperation in January of this year, and on the first day of his visit deals worth ‚¬100m were signed. How do […]

Taoiseach Enda Kenny visited Saudi Arabia to discuss trade cooperation in January of this year, and on the first day of his visit deals worth ‚¬100m were signed. How do you plan to create more opportunities for Saudi Arabia and Ireland to conduct commerce?

Taoiseach Enda Kenny’s successful visit, accompanied to the Kingdom by Ireland’s Minister for Jobs, Enterprise, and Innovation Richard Bruton and 100 senior Irish businesspeople representing 86 Irish companies, was the largest ever Irish trade delegation to Saudi Arabia. During his visit to the Kingdom of Saudi Arabia, the Taoiseach met with senior Saudi leaders, including HRH Crown Prince Salman bin Abdul Aziz Al Saud, to discuss potential areas of bilateral cooperation. The Taoiseach decided to step up Ireland’s engagement with Saudi Arabia, and this work is ongoing. A major priority for Ireland vis-á-vis the Saudi market is to expand our agri-food and technology footprint in Saudi Arabia. Ireland’s Minister for Agriculture, Food, and the Marine, Simon Coveney, led a successful agriculture and food focused trade mission to Saudi Arabia in October 2013, which included 45 Irish companies. Minister Coveney also held talks with Saudi Agriculture Minister, HE Fahd bin Abdul Rahman Balghunaim, with a strong emphasis on achieving improved access for Irish beef supplies to the Saudi market. Minister Balghunaim has agreed to visit Ireland later in 2014 to further develop bilateral cooperation in the agriculture and food sectors. Ireland’s food board, Bord Bia, recently appointed a Middle East Regional Manager in order to further promote opportunities for Irish companies to successfully conduct business in Saudi Arabia and indeed throughout the Middle East. In addition, Enterprise Ireland, the Irish government organization responsible for the development and growth of Irish enterprises in world markets, strengthened their team in Saudi Arabia, earlier in 2014, by appointing a Senior Market Advisor for the Health Care and Life Sciences sector.

In 2012, the Ireland Saudi Arabia Business Council (ISABC) was formed to promote trade, technology transfer, and investment between the two countries. Are there plans for further forms of formal cooperation?

Since its establishment in 2012, the ISABC has grown from strength to strength, assisting the successful visit of the Taoiseach to the Kingdom in January. Since then, the ISABC held productive meetings in Dublin in June, and members of the Council met with Ireland’s Minister of Education and Skills in April to discuss additional areas of cooperation in the education sector. There are currently over 3,000 Saudi students in Ireland, with the majority of these beneficiaries of the King Abdullah Scholarship Program (KASP). We hope to welcome many more students from Saudi Arabia to Ireland in the future. Ireland’s Minister for Education and Skills delivered the keynote address to the 5th International Exhibition and Conference on Higher Education (IECHE), in Riyadh in April 2014. The Saudi Minister for Higher Education, HE Dr. Khalid Al-Ankary reciprocated by visiting Ireland in June 2014. The Joint Economic Commission (JEC) is an important forum for developing government-to-government cooperation. The Ninth Ireland-Saudi Arabia Joint Economic Commission took place in Riyadh in February 2014, and Irish and Saudi officials explored areas for closer cooperation in the fields of higher education, agriculture, water and electricity, science and technology, and civil aviation.

Saudi Arabia continues to be a strong exporter of capital. What opportunities does Ireland offer foreign investors?

There are great opportunities in Ireland for companies looking to establish a base in Europe. Over 1,030 overseas companies have chosen Ireland as their European base, and Ireland was recently recognized by Forbes magazine as the best country in the world for business. In 1Q2014 our GDP grew at an annual rate of 4.1%, the highest growth rate since 2011. Ireland’s government debt is rated as investment grade by all major ratings agencies. We have raised ‚¬7 billion in the bond markets so far this year—more than 87% of our total funding target for 2014—in bond sales which were heavily oversubscribed by investors.