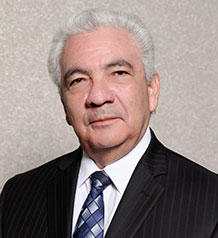 Carlos Manuel Obregón Quesada is currently President of the Costa Rican Electricity Institute (ICE). He holds a degree in civil engineering from the Universidad de Costa Rica and a graduate certificate in hydrology from the University of Padua. In addition, he has pursued graduate studies in hydroelectric projects in Japan, the US, and Spain. Obregón has been professor of hydrology in the civil engineering school at the Universidad de Costa Rica since 1998, and has participated in numerous seminars and conferences in his field. He worked at ICE for more than 35 years as head of hydroelectric projects and Deputy Manager of Energy Development and Electricity. Over the course of his career, he has been president of the Federated College of Engineers and Architects, president of the College of Civil Engineers, project manager at the National Housing and Urban Planning Institute (INVU), and coordinator of the hydraulic resource sector for the implementation of the Strategy for Costa Rica’s Sustained Development.

Share on:
"We have a planning outlook of 25 years; electricity demand in recent years has not grown as it had previously."

How ICE evolved since it was establishes in 1949?

ICE was created due to a dissent that existed in the electrical supply in Costa Rica, which was in the hands of the private foreign sector with poor coverage throughout country. The electricity was concentrated in the high-level zones of population, which also suffer from poor quality coverage. The level of electrical coverage in 1949 was 14% with a total installed capacity of no more than 30 MW. In these 68 years, the level of coverage has grown to 99.4%, and in the installed capacity is now approaching 3,500 MW. The same constitutive law established as fundamental and necessary to use natural renewable resources, especially hydroelectricity. ICE devoted itself to studying the entire hydroelectric potential in the country, conducting analyses that eventually led to the creation of several stations. In the 1970s, we did an analysis to diversify the counterfoil of production of electricity in which geothermal was analyzed along with wind power, solar energy, and biomass. At ICE, we take charge of the studies though planning, design, and when possible even the construction and operation of electrical generation, as well as through transmission and distribution. The ICE is the sole organization responsible for satisfying the electrical demand of the country. We have been operating the Miravalles geothermal field for many years, and now we are developing the geothermal fields near the Rincón de la Vieja Volcano at Pailas and Borinquen, each of which has a capacity of 55 MW. In 1963, ICE also became a telecommunications company. ICE installed public telephones in each of the settlements of the country’s many remote areas, which by providing the possibility of direct communication was an important step in the development of Costa Rica. We now support approximately 60% of the cell phone market.

ICE works in many areas including telecoms, infrastructure projects, and the electricity sector. In which area is ICE currently concentrating most?

We have a planning outlook of 25 years; electricity demand in recent years has not grown as it had previously. We had growth at one time of around 5.5%; however, because of economic reasons this figure is now closer to 1.2-2%, as the country is still suffering from the effects of the 2008 recession. We are currently in the last phase of the Reventazon hydroelectric plant project, which will add 305 MW of electricity to the country’s energy matrix. We inaugurated the plant on September 16, 2016. After that point, we will continue working with geothermal, beginning the construction of Pailas II, and finishing a new 50 MW privately owned hydroelectric plant, as well as pursuing several private developments where ICE buys its energy. There are two wind power plants of 20 MW. Looking ahead, our vision is to begin construction of Diquis hydroelectric plant, which would boast a 650 MW capacity.

In recent months, ICE has been undertaking huge investments to expand 3G and 4G coverage in 33 new regions. What have been some of the main highlights of this project?

There are two things that are most important for us, namely wireless coverage and internet access. We are in a constant process of optimization and introducing new improvements to our coverage. We have been making advances in fiber optics, and we still have room to expand further in what we call the “last mile,” which is the section in which we still have a lot of copper. If we are looking at growing our provision of 3G and 4G services, the best is still yet to come with direct fiber-optic connectivity. In this sense, we can begin the processes of developing applications, as there are intelligent cities, intelligent homes, and a wide availability of services, which many of the developed countries such as such as Korea and China, as well as European nations, have been implementing.

Costa Rica will soon achieve its goal of 100% renewably sourced electricity generation, mainly from hydro energy. How did this project come together and how do you foresee Costa Rica achieving this goal?

Everything depends on the plan of development that we have in place, which is adequately balanced, and the hydrological and meteorological conditions at play in Costa Rica. A year of constant generation using 100% renewable sources could be achieved; however, the cost would be high. A balance between risk and benefit should reflect a bit of thermal generation, but in the vast majority of countries throughout the world, thermal energy plays a role of low importance. In 2015, thermal generation was 1.06%, while 4% of our energy supply in 2016 will come from thermal generation, due primarily to the dry weather. In the second quarter, we expect to generate 0% thermal generation, which means that a thermal generation of less than 2% is a possible scenario.

Costa Rica and the ICE are greatly characterized by environmental responsibility. What are your main initiatives in this regard?

We have always been associated with environmental and CSR initiatives. When we develop a project, we also generate employment opportunities for the people of the region; our priority is always the people of the region. We have several key measures in terms of the study of environmental impact. We seek to compensate the communities with social works, such as schools, sidewalks, sport centers, and so on. All of our plants are certified, and we are advancing with ISO 9001, ISO 14001, and ISO 18001. We have contributed in important ways for many years, declaring zones of reservation, as is the case with Reventazon. There is a conservation area in the Arenal Zone in which we have taken an active part, and we have excellent relations with the National Park System. In our geothermal projects, all of the steam and water extracted from the soil is then injected back into it, which guarantees that there are no types of environmental pollution. We have systems that are set out at the start of a plant’s operation in which we establish different environmental parameters, and we monitor these throughout plant’s operation to detect any changes. This approach has, thus far, been very successful.

What are some of the long-term goals for ICE?

We are looking to support the counterfoil of renewable energy, moving it closer to 100% and satisfying demand with high-quality supply. We also hope to continue with the programs that we have in the place for growing the market and rightly secure them. In addition to this, our goal is to support the cost of electricity according to the agreements that we establish with the government of the republic, with president, and all citizens. The cost that we ensured in July 2014 will hold for 18 months. After that period had elapsed, we extended for 18 additional months during 2016, and we hope to be able to support it during 2017 as well. This in total would represent the possibility of 42 months in which the cost of the electricity is not going to overcome the limit that we established, but rather it would likely fall. The reduction that we recorded at the end of July was around 14%.