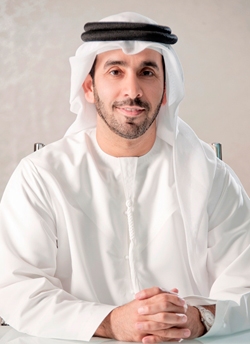 HE Dr. Nasser Saif Al-Mansoori was appointed CEO of Etihad Rail in September 2012, after serving on Etihad Rail’s Board of Directors since 2009. He began his career in 1988 as a City Planner in the Abu Dhabi Public Works Department, after which he took on a teaching position at UAE University. In addition to serving on the Etihad Rail Board, he also servers on the boards of various other government and NGO organizations, and was previously the Chairman of the Infrastructure Committee—Abu Dhabi Western Region Development Council, and a Board Member of Emirates Transport. He is also the founding member of the Emirates Traffic Safety Society and the UAE Sustainable Buildings Society. He holds a PhD in Urban Planning from Portland State Universiy in Oregon. His achievements have been recognized with several academic awards, including the Sheikh Rashid Bin Saeed Al Maktoum Award for Academic Excellence.

Share on:
"The GCC railway has the full backing of the federal and local governments."

Modern transport infrastructure is a key element in facilitating the international competitiveness of a country’s industrial sector. Etihad Rail’s state-of-the-art network has been carefully designed to serve the key industrial sectors in the country as well as the new industrial zones such as the Khalifa Industrial Zone Abu Dhabi (KIZAD), and to link these directly with our major ports in order to provide an efficient means of transporting large volumes of raw materials, and intermediate and finished products. Our 1,200 kilometer network will be ideally located to serve, amongst others, customers in the oil and gas, metals, aggregates, cement, and waste industries. We have already signed 15 MoUs with future customers and partners as they anticipate the improvements that rail will bring to their logistics operations.

How does Etihad Rail complement Abu Dhabi as an international business hub?

The railway will provide direct benefits to both businesses and individuals across the Emirate of Abu Dhabi, including those residing in the Western Region. The railway will mean less expensive, safer, and more consistent freight transportation. Lower costs will make products more competitive, leading to more businesses being attracted to Abu Dhabi, furthering economic growth and investment in the region. As businesses develop, grow, and prosper in such areas as Ruwais, Mirfa, and Madinat Zayed, Abu Dhabi overall will benefit through additional investment and employment opportunities in many diverse sectors such as health, education, and finance.

“The GCC railway has the full backing of the federal and local governments.”

In terms of transportation, how will Etihad Rail contribute to the shift away from oil and gas dependency?

The railway will facilitate the diversification of economic activity by providing the non-oil industrial sector with a safe, secure, reliable, and efficient means of transporting large volumes of goods to customers within the UAE, to and from the UAE’s ports, and to other GCC countries, thereby helping to reduce logistics costs and increasing the competitiveness on the world market of goods produced in the UAE. Etihad Rail has been working with the relevant authorities and port operating companies to ensure the rail network will enhance the efficiency of logistics chains, for example by connecting as close as possible to the UAE’s ports to eliminate costly double handling and storage of freight.

How will the passenger network link up other public transportation such as the Dubai Metro and Tramway?

Etihad Rail recognizes the importance of high-quality and convenient multi-modal passenger interchanges if rail is to maximize its potential passenger usage. Etihad Rail aims to integrate its network effectively and efficiently into existing transport systems and efforts are being made to connect with existing and future public transport networks such as the Dubai Metro and Abu Dhabi Metro and Light Rail.

What have been the challenges from an engineering perspective in developing the network?

Challenges and technicalities are to be faced as with any rail network anywhere in the world, and in the UAE, these challenges mainly comprise those involving operating in a desert environment—topographic and climate challenges such as sand dunes, wind-blown sand, high temperatures, and humidity need to be overcome. While all of these require care as we design the system, none of these challenges are completely new to railway builders and operators. At Etihad Rail we strive not to be pioneers in our field, but to use established international best practice. In the planning stages of the network, the teams have looked to the expertise of countries also dealing with these challenges such as Saudi Arabia, Mauritania, and China.

How closely is Etihad Rail working with other governments, regulators, and operators in the GCC to plan the connection of the wider GCC network?

The GCC railway has the full backing of the federal and local governments in the UAE as well as the governments of other GCC countries. Etihad Rail is an active participant in GCC committees and working groups, facilitated by the GCC Secretariat General, with the aim of ensuring that the GCC national networks are operationally interoperable, have similar train signaling systems, have compatible customs processes, and offer a regulatory environment that stimulates commercial growth. We have already agreed on the key common technical standards that each railway must adopt and these are already built into Etihad Rail’s designs. We are now discussing the operational, institutional, and regulatory arrangements that need to be put in place at the GCC level.

Once completed, the GCC rail network will reach from as far as Kuwait to Oman. How could a single GCC visa encourage tourists and business visitors to use the network?

A single GCC visa would clearly make it easier for tourists and business visitors to travel throughout the GCC region and, therefore, for Etihad Rail, working with our GCC partner railways, to encourage passengers to travel in the region by rail. The time, cost, and other obstacles currently involved in obtaining visas no doubt discourage many non-GCC nationals from travelling throughout the region. It would also have other benefits such as removing the requirement to segregate domestic and international passengers at stations, thereby reducing the cost and complexity of station design and construction.

Etihad Rail is going to enhance accessibility between Abu Dhabi and Dubai with the Western Region and Northern Emirates. How will the network encourage inter-Emirate growth?

The Etihad Rail network will benefit the entire country, connecting key centers of trade, industry, and population, and act as a catalyst for economic growth and sustained social development. Those living in more remote areas will see a step-change improvement in connectivity and accessibility throughout the Emirates. The network will encourage inter-Emirate growth by supporting tourism growth in the Western Region and the development of industrial clusters around rail terminals supporting the Western Region. It will also encourage sustainable industrial diversification and connectivity and result in improved Western Region and UAE GDP growth and rural development. Increased accessibility throughout the Emirates will enhance the attractiveness of places outside of Abu Dhabi and Dubai for people to live and work. This, in turn, will stimulate further investment.

Etihad Rail is currently completing Stage I, connecting Shah and Habshan to Ruwais. What is the size of this project and when is it expected to be completed?

Trains will be used to transport granulated sulfur from the granulation plants at Habshan and Shah to the export loading facility at Ruwais. Stage I of the Etihad Rail network will extend 153 kilometers from Habshan to Ruwais and 264 kilometers from Shah to Ruwais, facilitating an efficient, safe, and environmentally friendly means to transport the sulfur. Each train will be comprised of three diesel locomotives pulling approximately 100 hopper wagons. There will be one train per day from both loading points to the port. Each hopper wagon can carry 100 tons, thus each 100 wagon train will carry about 10,000 tons per day. Each train will eliminate approximately 300 trucks from the highways. Construction on Stage I is well advanced, with the Habshan-Ruwais route on schedule to launch by the end of 2013, with the Shah-Habshan route to follow in 2014.