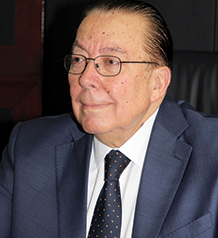 HE Mohamad Machnouk was born in 1941 and has a degree in political studies and public administration from the American University of Beirut. In addition to his political activity, he is deeply engaged in the fields of media and education. He has played an active role in proposing solutions that helped Lebanon through the transition towards peace after 15 years of civil war and actively contributed to the negotiations that led to the National Accord in Taef. He participated in a number of national, Arab, and international forums to debate the Lebanese political, economic, social, cultural, and media landscape and presided over preparatory committees for a number of national conferences on peace building, on the electoral law, and on the organization of the media industry in Lebanon and the Arab world.

Share on:
TBY talks to HE Mohamad Machnouk, Minister of Environment, on the impact of the Syrian crisis on Lebanon's environment policy, the awareness of renewable energy in the country, and Lebanon's goals for sustainable development.

How has the current refugee crisis and the region’s instability affected Lebanon’s environmental policies?

The Syrian crisis has disrupted environmental policies in a significant manner. At the upstream level, environmental considerations are not considered as a priority in emergency situations, which has made it impossible to proceed with an environmentally sound planning process in the country. Despite the efforts to initiate the National Sustainable Development Strategy in March 2015, this process remains unfinished and has not become a priority in the national planning agenda. Although the Syrian crisis had a major impact on the environmental and natural resources of Lebanon, policies and plans to respond to these impacts have not been acted upon.

What have been the ministry’s measures to tackle the trash crisis Beirut has been facing?

The ministry took the first action even before this crisis occurred by trying to prevent it and actively participated in the ministerial committee established for the purpose of integrating a common vision on solid waste management tenders, the first time this was ever done in Lebanon. The process for the tenders, however, was not easy in most regions of the country, particularly in the Greater Beirut area, where the tenders had to be repeated up to three times. At the end, a total of 17 consortiums of Lebanese and international companies participated in the bids, with six recommended successful candidates by August 2015. These bids, however, were not approved by the Council of Ministers, and the ministry left the committee, even though it maintained its role as a counselor on the issue.

How would you assess the level of awareness regarding the use of renewable energy in Lebanon?

The renewable energy sector gained momentum after the Copenhagen Climate Summit in 2009, when the Lebanese government voluntarily engaged in having a renewable energy share of 12% over the total use of energy by 2020. That engagement has created a national awareness in both the public and the private sector, which is demonstrated by the uptake of energy efficient but more importantly renewable energy measures. The ministry has also mainstreamed climate change with the public sector and has pushed for ambitious actions in that regard. Despite these advances, we are still critical about the incompleteness of the effort in the matter and have pushed other governmental agencies to move toward renewable energy technologies and to embrace them as a priority for the energy future of Lebanon.

How is the ministry working with its counterparts in other countries to attract investments to the environmental sector in Lebanon?

The government, through the ministry, has ratified most of the key environmental conventions and protocols, namely those on climate change, protection of the ozone layer, persistent organic pollutants, protection of the Mediterranean Sea, and the like. This has opened the door to direct funding from international organizations to further improve the implementation of these measures and to adopt the regulations implicit in these conventions.

What measures have you promoted to minimize the environmental footprint of the oil and gas sector the country is seeking to develop?

A strategic environmental assessment (SEA) was carried out for the sector from 2010-2011, and the Lebanese Petroleum Administration (LPA) together with the Ministry of Environment is following up on the smooth implementation of these recommendations. Accordingly, a second phase of the Oil for Development Program was signed with the Norwegian government; this program includes several environmental activities.

What are your prospects for the development of sustainable policies in Lebanon in the next five years?