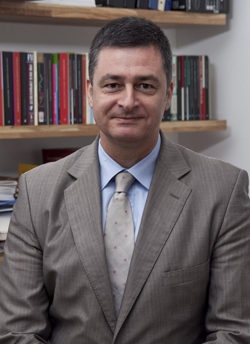 Chairman of the Board of Trustees, Istanbul Bilgi University

After obtaining a BSc in Computer Engineering from the University of Illinois in 1981, Rifat Sarıcaoğlu went on to pursue an MBA at New Brunswick University. From 1982-1986, he served as a System Analyst at Anatolian Industry Holding. He then worked as Sales Manager for NCR and ICL-Regional from 1986-1988 and 1988-1990, respectively. In 1993, he became General Manager of Hürriyet Education and International Trade. Since 2000, he has been CEO of Laureate Education Turkey. In addition to serving as Chairman of the Board of Trustees at Istanbul Bilgi University, he has been the President of the Foundation Universities Association of Turkey since 2009.

Share on:
How has Bilgi University grown and developed since it was founded? Bilgi was one of the first in the second wave of universities founded in Turkey. Its story goes back […]

How has Bilgi University grown and developed since it was founded?

Bilgi was one of the first in the second wave of universities founded in Turkey. Its story goes back a bit further to the time of private universities, because private universities were not allowed to set up. Initially, the school was set up as a private university that was doing dual-degrees with UK universities. It was established by nine founders who were not entrepreneurs; they were simply in love with education. They wanted to set up a university in Istanbul to introduce a synergy between the poorly served neighborhoods and wealthy students. It serves the A+ to A category in terms of non-scholarship students. Since 2009, we have been a very highly perceived social science university. Because of the competition in mass education, we decided to become a fully comprehensive, national university rather than an Istanbul city university. We added engineering, architecture, health sciences, and many Master’s and PhD degrees. For the first time in Turkey, we created a bilateral exchange agreement with the University of Liverpool in the UK. We were the first to do so in a foundation university. And we were the first to do a 3+1 degree in Turkey, where you study three years here and spend your final year in the UK, ultimately receiving two accredited degrees. It was a major accomplishment. We have seven such degrees available now, and we want to grow in that area.

How would you characterize Bilgi University’s approach to education?

Since its foundation, Bilgi has attempted to establish a cultural and scientific community that promotes tolerance and respect for a diverse amount of individuals with different lifestyles, beliefs, and ways of thinking, within the framework of contemporary universal values, while at the same time maintaining strong ties with all segments of society. The Bilgi community includes more than just students; it also includes faculty, alumni, families, employers, and neighboring communities where Bilgi is located. Being part of the Laureate International Universities Network, the founding premise of Bilgi has come “to make education more accessible and affordable so that more students can pursue their dreams.” Bilgi seeks to educate free-thinking, creative, intellectually curious, and enterprising individuals who will contribute to a world in which knowledge is accessible to all and, indeed, in which access to it has come to be seen as a fundamental human right. Bilgi holds a primary responsibility for providing, maintaining, and further developing an academic environment in which both students and faculty members are able to engage in learning and the production of knowledge at the highest level.

What is the significance of Azerbaijan for Bilgi University?

Azerbaijan-Turkey relations have been strong, with the two often being described as “one people, two states,” due to a common culture and history, and the mutual intelligibility of the Turkish and Azerbaijani languages. Turkey has been a staunch supporter of Azerbaijan in its efforts to consolidate its independence and preserve its territorial integrity. Azerbaijan has always been the leading student provider to Bilgi. Linguistic affinity is one of the most important advantages for Azerbaijani students to get acquainted with the local society since English is still not the second language within the public, even though Bilgi is an English-medium university. The historical and special connections of the two countries also provide a stable ground for prospect partnerships. The close proximity of the two countries makes Bilgi a favorable choice, especially for families. Istanbul, of course, is a location preferred by Azerbaijani youth, and Bilgi offers the highest quality academic services as well as social, cultural, and economic support to all Azerbaijani applicants. Among other foundation universities, Bilgi announced the first international student scholarship for Azerbaijani students. To be honest, even though our Azerbaijani students carry a different passport, we feel that they are an irrefutable part of our family. We will carry on accepting satisfactory numbers of students from Azerbaijan who will be the leaders of tomorrow starting their professional life at Bilgi.

How does Bilgi University tailor its educational offerings to appeal to students from Azerbaijan?

We have representatives in Baku and we visit Azerbaijan at least five times a year. We visit high schools and other private education establishments and try to recruit academically successful candidates. We do road shows from one city to another to interview prospective students, and then host them in Istanbul for the duration of their studies. More importantly, we have private outreach and marketing campaigns specifically tailored for Azerbaijan every year. Countries that recruit hundreds and thousands of international students acknowledge students as a lucrative source of income. At Bilgi, this is exactly the opposite. We offer satisfactory tuition scholarships to appeal to international students. The purpose of the scholarship is to provide our students an environment where they can interact with others in the English language. We are very certain that our university provides the optimum international opportunities both in Turkey and abroad. We make sure that all of our students take advantage of our exchange and partnership agreements with over 300 leading institutions all over the world. There are dual-degree options as well as other student placement exchange occasions for one or two semesters. All of our students are expected to take advantage of these opportunities during their undergraduate studies.

Why are international links important to Bilgi?

Education cannot be separate from the world. The very word “universe” is part of “university,” which is number one. Number two is opportunity; we want students to experience different cultures. The same concept I mentioned domestically is true internationally and is related to understanding different perspectives. It is important to understand even those who you may not like and get to know where they are coming from. There may be disputes and issues, but that is why Bilgi wants to unify students and connect the Laureate network. Furthermore, we wanted to build a true network, not just an exchange program, so that we are on one campus but utilizing multiple campuses worldwide under the same conditions. I think that is the main difference that we aim to make. International students contribute varied perspectives to the experience of all students and enhance our long tradition of having Bilgi students learn from one another. Students from abroad are also highly important in our internationalization mission. Bilgi plays a vital role in international capacity building through the education and training it offers international students. This is particularly significant for students from low- and middle-income countries. International students bring with them an international perspective helping Bilgi domestic students enjoy a stimulating multicultural academic environment. Peer-to-peer learning can be as instructive as traditional academic teaching. A diversity of ideas and experience fuels innovation. Bilgi is hosting almost 600 international students from 90+ countries all over the world.