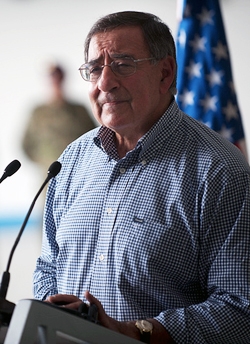 Secretary of Defense, US

Born in 1938, Leon Panetta is the 23rd and current US Secretary of Defense and has served in the current administration since 2011. He was previously Director of the CIA, President Bill Clinton’s White House Chief of Staff, Director of the Office of Management and Budget, and a member of the US House of Representatives from 1977 to 1993. He graduated from Santa Clara University in 1960 and joined the US Army in 1964. He was discharged in 1966 as a First Lieutenant.

Share on:
The defense partnership between the US and Colombia has been strong, remains strong, and will continue to be strong in the future. Both of our nations are committed to deepening […]

The defense partnership between the US and Colombia has been strong, remains strong, and will continue to be strong in the future. Both of our nations are committed to deepening our cooperation even further.

Over these last decades of very close cooperation, Colombia has built one of the world’s most advanced military and police forces and has accomplished an historic transition. In the last few years alone, Colombia has moved from a nation under siege from guerillas, drug-trafficking mafias, and paramilitary groups to a country that is a force for security and prosperity in South America. That is a tribute; a tribute to the strength, fortitude, and above all sacrifice of the Colombian military and the Colombian people.

In particular, Colombia has made significant progress in its campaign against the Revolutionary Armed Forces of Colombia (FARC). I want to commend Minister Pinzón and the Colombian armed forces for their efforts against this terrorist group. The Colombian people have expended a great deal of precious blood and treasure in their campaign against the FARC, and as a result the FARC has been seriously weakened.

The US stands in solidarity with Colombia in its campaign against the FARC, and we will continue to provide training, equipment, and assistance that Colombia has requested in order to defeat this common enemy. Colombia is planning to receive 17 Black Hawk helicopters between December 2012 and January 2014 to help its efforts against the FARC.

It’s a testament that the progress Colombia has made in resolving its internal security challenges has really helped bring together our relationship and our cooperation on regional security challenges, particularly those emanating from Central America. Our two nations both understand that our security depends on stability; not just within our borders but beyond our borders. And there is a great deal of potential for our two militaries to work closely to help build the capacity of other nations in this region to address these security challenges.

To that end, in April 2011, during President Obama’s visit to Colombia, he and President Santos signed a new Regional Security Assistance Cooperation Action Plan. Minister Pinzón and I have discussed the next steps that we can take within the framework of this plan to achieve our shared desire of a secure, stable, and prosperous Western Hemisphere. We are working with our State Department colleagues to move forward with this plan.

One of the specific steps we debated was the establishment of a state partnership program between Colombia and our own National Guard. This program has helped deepen our defense cooperation with other partners in the region, including Chile, Peru, and Uruguay. The South Carolina National Guard will be partnering with the Colombian Ministry of Defense to share knowledge, exchange expertise, and develop an action plan moving forward.

State partnership programs have helped us share lessons learned and expertise that has been shared for disaster response and other missions where the armed forces can provide critical support to our civil authorities.

The Colombian armed forces already have tremendous experience and expertise in disaster preparedness and extensive experience dealing with floods and other natural disasters. The establishment of a state partner program represents an opportunity to further enhance our capabilities in this area and represents an important new avenue for defense cooperation.

Colombia is one of our closest partners in the hemisphere and an emerging regional and global leader. In the new defense strategy that we established in the US, one of the key elements is to develop innovative security partnerships around the world. The kind of partnership that we have here in Colombia is an example of the kind of training exercises assistance that we hope to be able to develop elsewhere as well.

What Colombia has done is a tribute to the strong partnership we have built—a defense partnership that has endured for more than 60 years and which has helped bring stability and prosperity to both of our great nations.