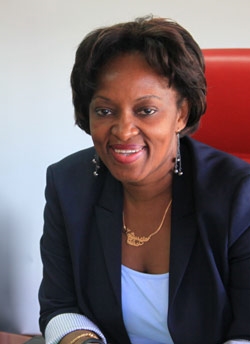 Marlene Manave was born in 1961 and has a degree in Economy from the University Eduardo Mondlane in Maputo. She is currently the CEO of LAM, and is also the Chairperson of AASA, AGM, and Travelport, Galileu Mozambique. She is additionally a Board Administrator at Hotel Cardoso.

Share on:
To what extent has LAM developed as Mozambique’s national flag carrier since its establishment as part of the ports and railways service in 1936? Linhas Aéreas de Moçambique (LAM) was […]

To what extent has LAM developed as Mozambique’s national flag carrier since its establishment as part of the ports and railways service in 1936?

Linhas Aéreas de Moçambique (LAM) was created in 1936 as Divisío de Exploraçío de Transportes Aéreos (DETA). At that time, the service was mainly to accommodate the transport of passengers to and from nearby countries. It was also created to establish a connection between the south and the north of the country to complement the service being provided by the railways. When Mozambique achieved independence, the government decided to restructure the sector and separated the transport service from the railways to develop them separately. The air transport company then adopted the name Linhas Aérea de Moçambique (LAM). At that time, the company owned four Boeing aircraft, and then later it bought a DC-10. In 1991, we started providing regular services to Lisbon, Paris, Rome, Madrid, Berlin, Sofia, Copenhagen, and Dubai. We also flew charters and contracted flights. Some of the destinations were Havana, Boston, Mecca, Dhaka, and others. Since then, there have been changes in the airline business, as it became a private entity in 1998 when the government owned 80% and the employees took a 20% share.

How have you adapted domestic scheduling to cope with changing demand?

We moved to a new type of aircraft to accommodate the flexibility that is required for different routes. With smaller aircraft, i.e., the Embraer (E190) and the Bombardiers (Q400), we are offering more direct flights than we were using the larger Boeings, with which we were offering multi-leg flights. We are growing quickly and our need to increase capacity is also rising. Two years ago, we were flying two or three times a week to most of our destinations, but we are now flying two times a day. This is a tremendous change, and we are increasing the size of the fleet to deal with the growing demand. Prior to doing this, we were combining Tete with Quelimane for instance, and we would have two frequencies. Now, we can have dedicated flights for each of these two destinations. There is flexibility and we need to accommodate.

Is LAM’s public service duty one of the barriers standing in the way of low-cost air travel in Mozambique?

It could be, yes. If we had more capacity we could lower travel costs. Everything costs less when you have more supply. This applies to the cost of the ticket as well as the cost of the aircraft, accommodation, and food. I believe that more capacity will make things better, because the more passengers we fly, the more fixed costs will be diluted. There is a difference between low-cost and low-price carriers. To be low cost, you need to have low costs so you can charge a low price. In Mozambique, nothing is cheap. There is no way you could operate a low-cost airline here, unless you have lower direct operation costs including jet fuel, taxes, user charges, aircraft acquisition, safety, and security charges. The market is open for low-cost airlines, but it is too expensive to operate here, meaning it would be difficult to launch one. People say it is difficult to develop tourism because of expensive air transport, but what about the hotels? Until we have the volumes to bring all the costs of tourism down, then tourism will have difficulty developing at a rapid pace. The developed countries didn’t develop overnight; it was a process and I believe Mozambique is in that process. It will take some time, but we are getting there. There are many airlines flying to Mozambique now.

“We are planning to fly to all the Southern African Development Community (SADC) countries by 2015.”

LAM is looking for a strategic partner for LAM International. How is that progressing?

When talking about LAM International, we need to think about who is going to travel, and how many passengers we will have. Qatar Airways currently flies everywhere at the cheapest prices it can offer. At the moment, we don’t have enough passengers to go intercontinental because many Mozambicans still lack basic needs and only a few can afford to travel. I don’t think we have enough traffic at the moment until we develop the capacity for Mozambicans to travel around the country first. Also, our strategy is to develop domestic and regional traffic, and then build up to intercontinental travel. We are planning to fly to all the Southern African Development Community (SADC) countries by 2015. We launched a flight to Zimbabwe in 2012 and we are now working toward Malawi. For Mozambicans to fly intercontinentally, you need to make sure you have enough flights, because if you have one flight per week no one will want to go as they will have to wait a week before they can come back. People need some flexibility. That means that you need to offer three flights per week.

What is your occupancy rate at the moment?

In the peak season, for intercontinental service it will reach 70%; however, in the low season it will go down to 30%. We need an average of 70% across the year to make a profit. We used to have this in the past and I believe we will in the future. We had a flight to Lisbon in 2011, but it did not go well. Even though the peak season was good when everyone was on holiday, the low season occupancy rates dropped and the costs did not. We need to get enough traffic to cover the entire season.

Which are your most profitable routes?

Domestically, I don’t think we have one that is the most profitable, as all of our routes are busy. In terms of cost efficiency, the one-hour flights are the most profitable in terms of cost effectiveness as they spend less fuel. Nampula is a very good flight for us, and is almost always full year round. Regionally, Johannesburg is a profitable route for us as it is very close and quick. The costs in South Africa are much lower as well, such as for catering and fuel. The demand is always there as well throughout the year; however, there is more competition with other airlines in South Africa.

In 2011, you had a 15% increase in profit. What were the main contributing factors to that growth?

Our industry is very influenced by currency. In 2011, the metical appreciated. Almost 80% of our costs are indexed to the US dollar, so whenever the metical devalues we need more meticais to pay the same US dollar bill, but then it works the opposite way as well. This factor had a good influence on our increased profits. We also have an excellent revenue management scheme. We used to have our flights full of low prices, but what we do now is allocate different seats into different price brackets to make it profitable. We have emerged from huge debts because of poor revenue management to making a profit. We have managed flights within the same tariffs allowing cheaper prices when the demand is lower, which has paid off.