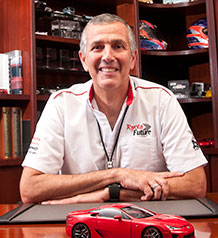 Javier Quirós is President of Purdy Motor Group, having been a part of the firm for over 25 years. He has a master’s degree in business administration.

Share on:
"We must keep growing in Costa Rica, and that means more investment, more jobs, and more peace."

What are the main milestones and achievements of Purdy Motor?

In 1957, my father was working in agriculture and was looking for a four-wheel drive vehicle. He had heard of Toyota. He ordered a few cars and later realized he liked the business of selling cars, so he decide to start his own business representing Toyota in Costa Rica. By 1959, he quit his career in agriculture and move to San Jose and worked with Toyota motors. By 1963, he had set up its first assembly plant in partnership with TMS. This lasted until 1983 when the law changed. Toyota had the largest market share in 1971 with the Corolla model and has remained in that position. In 1997, we hired the CEO of the company and set up a board of directors and things started to evolve more professionally. We have been lucky and the company has grown nationally and internationally, mainly in the US.

What segments of the population do you target?

Purdy’s vision is to only sell Toyota products, including Lexus and Hino Trucks and Daihatsu, a Japanese brand the trademark of which is owned by Toyota. We are a Toyota family and it is an interesting market. Earlier, it was such that for every four used cars sold in the country, one new car was sold. We convinced the government that used cars are not good for many reasons. The total number of new cars sold in 2016 was around 46,000. Last year was our best year ever and this year will be better than that. I do not expect the car market to grow more than 46,000 cars a year, which includes pick-ups and trucks. I do not think we will grow but will remain stable over the next four to six years. Our main problem is Costa Rican infrastructure. We pay a high tax each year called the Marchano to renew our license plates. The tax is supposed to support infrastructure; however, that did not happen. Instead, the money goes to different cashiers when they need it, which is not fair. Costa Rica is still a country of law and we all have to respect it.

What is your outlook for this year?

Toyota will have brand new models in 2017. We will be able to be around 21% with Toyota, Lexus, and Hino. We used to be 24%; however, competition is now stronger and has cheaper cars because others bring in cars from other places and customers must learn that cheap does not mean same quality. You have to learn not to be frustrated when you drop two points in the market. We just have to settle down and attack again. Next year will be our year to come back and gain market share.

What are your main goals and priorities for 2017?

One is to keep growing our market share in the US. I am in my retirement age and it is not a matter of money; it is about going around and making people happy. One time I was a parking lot and told my wife “You see all those cars? There are 600 cars or more in the parking lot, when 10 years ago there were only 10 motorcycles.” Now I am glad to say there are 600+and I hope to see 1,000 cars in the future. This means people already own a house or cover the principal needs and they are in peace and now they want to go travelling. The more cars and motorcycles I see, the happier I am because it means people are doing better. Growing in the US is part of the show. It is hard and of course as Costa Rica is the chicken of the golden eggs, which we cannot abandon. We must keep growing in Costa Rica, and that means more investment, more jobs, and more peace. We plan to make a few more investments in Costa Rica to keep growing.