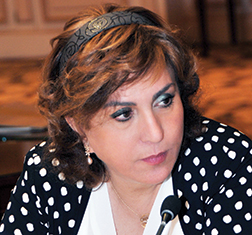 Alia Abbas earned bachelor’s degrees from the Lebanese University in French literature in 1980 and later in law in 1999. She completed her MBA in 2004, and is currently a doctoral candidate in business administration at Lebanese University. She was appointed to her current position as the General Director of the Ministry of Economy and Trade in May 2014. Prior to serving in her current role as General Director, she held for many years such other titles within the ministry as Head of Expenditures Directorate, Financial Advisor, and Member of the High Audit Committee. She also served as Ministry of Finance Representative and Head of Indirect Taxes Bureau.

Share on:
TBY talks to Alia Abbas, General Director of the Ministry of Economy and Trade, on maintaining growth amidst an economic slowdown, increasing exports to the EU, and plans to join the WTO.

Lebanon’s nominal GDP has been growing despite falling prices and stagnant growth. What accounts for the country’s resiliency, and what are the actions taken into account to counter these negative effects?

Lebanon presents a number of opportunities and factors that account for its resiliency amidst all surrounding conditions. In 2015, we achieved growth of 1.5% in comparison to the previous five years mainly due to our effort in continue building partnerships and seeking opportunities abroad. Our highly skilled labor force and the wide reach of the diaspora also continued to play a strong networking role by acting as a main intermediary between countries to do business in. Lebanon also reinforced its role as a hub and competitor in the field of business development for the MENA region, and our way of life continues to be a trend-setter in the Middle East. Finally, we have a service-orientated economy with low levels of inflation and a stable exchange rate that allow the country to build upon two important pillars: consumption and investment. The ministry has also set in motion a set of measures looking to reinforce our economy, such as updating and reinforcing the relevant legislations and rules, restarting the accession process to the WTO, launching initiatives to reinforce PPPs, and signing new trade agreements that pave the way for new trade markets for Lebanese exports. The economy will not witness any improvements in its indicators in 2016 unless political understandings result in restoring confidence in the Lebanese economy, creating growth, contributing to attract tourists and investors, and facilitating exports to improve the balance of trade.

The association agreement between Lebanon and the EU entered into effect 10 years ago. How has this agreement contributed to boosting Lebanese exports and attracting investments?

The Lebanon-EU Association Agreement has not only had a great impact on trade exchange, it has also put reform on the Lebanese government’s agenda, as well as improvement in the production capacities of the private sector. The agreement was designed to help support the Lebanese economy, serving as a catalyst for development, whereby Lebanon can utilize it for structural reform, technology transfers, and human and institutional capacity building. At the trade exchange level, bilateral ties have increased steadily in recent years with an average annual growth of 12.7% since 2008, and with total imports amounting to almost USD7.5 billion and exports only USD320 million. This weak growth in Lebanon’s exports to the EU is primarily due to the stringent market access requirements imposed by the EU on most of its agricultural and agro-industrial imports. On the other hand, this agreement entails a package of technical assistance that grants approximately EUR50 million to Lebanon every year. The agreement has had both positive and negative effects for Lebanon, but something we would like to emphasize is the need of our country to receive more assistance to stress on the additional needs Lebanon faces.

Lebanon’s accession to the WTO has been stuck for nearly 20 years. Is the country’s accession feasible now, and what could be the major benefits for Lebanon?

The main advantage of Lebanon’s accession to the WTO is restoring confidence in the economy. Once we enter the WTO, the reciprocal privileges among members of the organizations will allow us to open up to new markets and hence boost Lebanese exports to more than 162 markets. It will also help Lebanon to attract foreign investments, create new investment opportunities for Lebanese companies, and contribute to the creation of new jobs to combat unemployment. Despite the fact that this process has been filled with challenges, we have come a long way, and we have a promising opportunity today to complete our accession by being well aware of our rights and duties in order to face these challenges together. Joining the WTO is a necessity, as it would give our economy an international certificate to world trade.