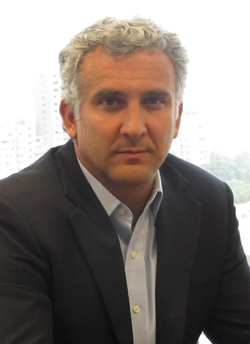 Give Me a Wave

Javier Garcia-Burgos has more than 17 years of experience in the energy business. He has been the CEO of IC Power since 2011, CEO of Inkia Energy since 2007, and CEO of Kallpa Generacion since 2005. He was Regional Director for South America of Globeleq between 2002 and 2007 and held different positions at Edegel between 1996 and 2001. He holds a degree in Aerospace Engineering from San Diego State University and an MBA from ESAN.

Share on:
"Hydro is a manageable energy source as well, while solar and wind are not."

Could you tell us about your company and your activities in Peru?

We are present in 11 countries: Peru, Chile, Bolivia, Colombia, Panama, El Salvador, the Dominican Republic, Nicaragua, Guatemala, Jamaica, and Israel. We are a power generation company headquartered in Peru, our main market of operation. In Peru, we have two power plants in operation, with an aggregate 1,060MW capacity. One is called Kallpa and the other is Las Flores, which we acquired from Duke in 2013. We have two projects under construction, one being Cerro del Aguila, which is a 510 MW hydro plant and an investment of almost $1 billion. The other is Puerto Bravo, which is a 720 MW plant, and a $400 million investment in southern Peru. It was bid on by the government to create demand for the future pipeline to the south, by promoting the construction of two power plants to assure that there is ultimately a market for the gas to be transported. We started operations in 2007 in Peru and have become one of the major players in the country. We are growing quite quickly, and we are developing additional projects to maintain this high level of growth.

Historically there is little precedent for tendering power plants in Peru. What does this new strategy imply for you?

The government decided to start tendering for different technologies, which is something we do not fully agree with. We argue that most decisions regarding new investments, locations, and technologies should be determined by the market. Meanwhile, we are concerned that the government’s independent tenders for many new technologies could lead to an oversupply in the system. They are allocating all the energy growth, as well as some of the existing demand, for new projects to such a degree that there is no market for the existing players to compete for. In the particular case of the plant we were awarded in the south, the bidding is for a reserve plant with guaranteed revenues, which implies low returns. That is something on principle that we do not normally do, as we would rather compete in the market and commercialize energy with a potentially higher margin. However, today there is a scarcity of gas in Peru, although there are a lot of gas reserves to be released and used, particularly in the south. We felt that if we want to be an active player in the future in terms of growth, the best way to assure gas is to build one of these plants in the south. In the short term, we will build the plant and operate as a reserve. In the long term, when the pipeline is ready, which we expect to be complete before 2020, we will be allocated gas to convert these units, which will give us a new wave of growth. We will have four turbines with 720MW in aggregate, operating in open cycle, and will convert them to combined cycle for over 1,000 MW. It was a strategic move in order to be the first entity to receive gas in the long term. Sometimes the excess bidding by the government to promote new technologies is not completely aligned with the growth in demand, as their growth objective is often outdated. They are concerned about the lack of supply. We are concerned about oversupply as we are a poor country and run the risk of spending too much to build capacities that the system does not yet require. The government is so concerned about the lack of supply that it is pushing toward oversupply. We are in the opposite position and believe that there is too much capacity to be paid without enough market demand. We think that the market should determine new plants based on price signals, contrary to politically determined projects.

“Hydro is a manageable energy source as well, while solar and wind are not.”

Recently, renewables have become competitive with even the cheapest conventional energy sources. Are you planning any renewable projects in Peru?

We are not considering any solar or wind projects in Peru. Although Peru has relatively good conditions for these two energy models, they remain more expensive than conventional energy sources. Conventional sources include hydro, which is also renewable. Hydro is a manageable energy source as well, while solar and wind are not. They imply more indirect costs to the system because you need other plants to act as backup to mitigate volatility in wind and solar generation. Even though the government has implemented some processes, we do not want to invest in technologies that we see as overly subsidized. Subsidies can change over time due to political reasons. What’s more, we believe that Peru should not rely excessively on non-conventional renewables because hydro is a better and cheaper renewable energy. While hydro can be sold at $70 PER WHAT?, solar would be sold at $120. The first tenders were for $220. As a country, we should not pay for such technology while there is a better and cheaper alternative widely available. These bids have taken place mostly due to foreign construction companies and equipment manufacturers that have lobbied quite a bit to push to install their technologies in Peru, due to the downturn in Europe.

Could you tell us about your hydro plant?

Peru’s energy mix is a 50-50 split between natural gas and hydropower, with 2% to 3% derived from other sources. This makes for a combination of two manageable, cheap, and clean energy sources. The project we are building is one of the last cheaper of hydro plants that are less than $2,000 per kW. It is a 510 MW project costing $910 million and İS scheduled for completion by 1H2016. We sold a part of its energy under government promoted bid. We are still looking for new hydro plants, and have found that the construction costs of hydro plants are becoming more expensive, not only because the best locations are already taken, but also because of recent negative experiences in the construction of other projects in the country. All things considered, prices for new hydro plants are between $2,500 and $3,500 per KW, with capacity factors around 70%. It is still lower than other renewables, but not as cheap as it used to be.

What about future projects?

Our intention is to actively pursue growth throughout Latin America. The hydro project was a learning process, trying to finance a billion-dollar project in Peru during a crisis. We achieved it through a loan from 12 banks from nine countries, which was not easy to deal with. We discovered the merit of reducing the size of our project, and are now looking for projects in the $500 million ballpark.