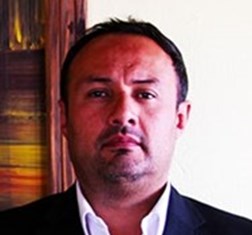 35% of tourists from Colombia

Giovanny Camacho was appointed as general manager at Ciudad Mitad Del Mundo, the City of the Middle of the Earth, in April 2014, and has been responsible for many of the professionalization, expansion and innovation at the park. Previously, he works as marketing and public relations consultant, both independently and for a company. He has a degree in journalism from Universidad Tecnologica Equinoccal.

Share on:
“From now on, we will be the official image of Ecuador at tourist fairs.“

What do you envision with Ciudad Mitad Del Mundo?

Our vision is to create another way to develop tourism, and we named it cultural tourism. History tells us that the Incas were the most important people in this region; however, that is wrong. We had already Kitu Kara people here. Ciudad Mitad Del Mundo is a vision of Kitu Kara culture, and it represents a connection between the people and earth. The Kitu Kara had their way of observing the stars, and many years before the geodesic mission of France and Spain reached the equator, Kitu Kara had already determined where the center of the planet was. They used their deities to shape their cultural vision. For example, the Pingaroa or condor is a bird of fire that perches in the center of the planet and performs rituals. This is the starting point with which we work on the Ciudad Mitad Del Mundo. We want to show the cultural and geographical wealth of Ecuador. We have just built a replica of the Cochasquí­ pyramids 50km away from Quito whose complex is surrounded by mountains. We also build ancestral homes that are an example of the richness of the incredible technical knowledge of thermo-adaptable materials. We have a complex with two houses of the mountains, one of the coast, and one of the east. We also have a shaman who can perform traditional cleanings through rituals. All these represent a way to transfer our cultural wealth to the people who visit us. We want people to know that Ecuador is much more than the Galapagos and the mountains. The Kitu Kara civilization was huge. In history, the Incas fought with them for over 50 years before creating a marriage alliance between the two cultures. Our strategy has been so successful that we have received a call from a representative of the Ministry of Tourism to notify us that it will use the Ciudad Mitad Del Mundo image at the next tourism fair in London in November. From now on, we will be the official image of Ecuador at tourist fairs.

How do you envision further opening up for tourism?

As a business model, we try to open the tourism market. We want to be a source of momentum for small local businesses. For example, King de Tour is a double-decker tour bus company that we allied with three years ago, and it has grown a great deal with its Quito Tour Bus. Another strong point is the Plaza del Cacao. Much of the best chocolate in the world is made with Ecuadorian cocoa; however, we have never generated industrial processes with our raw material because we were focused on exporting it. In the Plaza del Cacao, we have a museum where we explain the cocoa production process in Ecuador and its importance in the national context. We have two specific objectives: to have national tourism be empowered in Ecuador through knowledge to valorize the national productive axes and for foreign tourists know more about the country. In the region of Pichincha, we are working on a new high-altitude coffee, and we have collaborated with certain Colombian companies to develop an international coffee with the goal of exports. We have a wine project that is being developed with grape cultivated in Ecuador. We are partnered with Vinos Dos Hemisferios, and we will soon have a wine museum with a similar concept to the cocoa museum.

Where do your visitors primarily come from?

Colombians represent 35% of tourists, while US tourists are 20%, and European tourists are 20%. We have a great exchange with Asia and China because recently the Chinese ambassador had a working agreement with Ecuador. In the coming years, we will have a significant increase in tourism from that part of the world. Everything depends on Ecuador’s tourism policies. However, we have limited capacity because our goal is not to be like Disney World; we want our visitors to be relaxed and feel free to walk around without forming long lines. We do not want to fall into a mechanic of excessive consumption. We have to measure our growth because if we grow disproportionately, customer service will fail.

What impact will the new investment law have on the tourism sector?

We are a public company, with ownership divided between the province of Pichincha and the Ministry of Tourism. The minister has an elect, and this entity regulates the policies that we fulfill. When it presented me with the project, I made it clear that, despite being a public project, I had a private vision to make it grow. This does not mean that we are not willing to work in cooperation with the public sector or the ministry. Seven years ago, there was no adequate legislation for pricing; foreign tourists paid a different rate than national tourists. However, with the arrival of the new president, prices were standardized. We have to work with national tourism policies and work on promotion not only internally but also with the strategies of the Ministry of Tourism when we talk about international targets.

Ecuador is strong in eco-tourism. How do you implement green solutions in your park?

We are a 100% green company, and we are the first pet-friendly tourist attraction and the first pet-friendly company in Ecuador. Many of our workers come to work with their pets. In fact, we rescue stray animals, which is part of our attraction. We are in the process of eliminating single-use plastics in the company and recently eliminated the use of straws. We have a plan to build a recycling factory-museum so that our visitors can learn about our process of recycling all the plastic we discard. At the financial level, it is an opportunity to save costs in the long term. Regarding the economic aspect, we have had a sustained annual growth of 8%, which allows us to think about having the growths mentioned above. With the economic reality of the country and our ability to receive tourists, we can maintain a similar growth for the next few years without losing the original line that prioritizes customer service.

What are your plans for the coming years?

We want to acquire land around our complex. We are in a desert zone, and we are exploring the possibility of expanding. We want to build a life-sized pyramid, and if we can acquire the land next to us, it could be possible. The one we recently built was on a 1:12 scale, while the new project would be a real-scale pyramid.