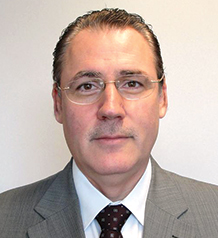 Abdallah Al Dardari holds a Bachelor’s degree in Economics from Richmond — American International University of London (1985) and a Master’s degree in International Economic Relations from the University of Southern California (1988). He undertook post graduate studies toward a Master’s of Philosophy in International Relations at the London School of Economics and Political Science between 1988 and 1990. He also holds an honorary doctorate from Yalova University in Istanbul. Over the past three years, he served as the Chief Economist and the Director of the Economic Development and Globalization Division (EDGD) at UN-ESCWA. Under his leadership, the division supported Arab efforts to deepen regional economic integration, and assisted Member States in designing policies that would lead to inclusive growth, job creation, and human security.

Share on:
TBY talks to Abdallah Al Dardari, Deputy Executive Secretary of the UN Economic and Social Commission for Western Asia (UN-ESCWA), on the participation of women in the economy and the workforce and regional integration.

How do you assess the role of women entrepreneurs in the region, and how does Lebanon stand in comparison to other countries in the region in that regard?

The Arab world has witnessed significant changes in regard to women’s empowerment and gender equality over the past 20 years. Gender parity in primary and secondary education has been nearly realized and more women than men enroll in tertiary education in most countries. Women have seen improvements in health, including access to reproductive health services, and various national systems have made advancements in terms of guaranteeing women’s rights at the legal and political level. Despite this progress, the region as a whole has yet to see a significant change in women’s economic participation. Most notably, and despite impressive rates in female higher education, the region has some of the lowest representation of women in the workforce. Women in Lebanon face many of the same challenges as they do in other countries in the region. In 2010, Lebanon ranked 88 out of 113 economies in The Economist’s “Women’s Economic Opportunity Index,” which measures specific attributes of the environment for female employees and entrepreneurs. And according to available figures, Lebanese women make up only 22% of the labor force, and 10.7% of senior staff and managers. Moreover, the share of Lebanese women in the MSME sector is quite low with figures ranging between 8% and 10% as per UNDP (2008) and ILO (2007), despite the fact that the legal system does not impose any gender-based restrictions on setting up businesses, acquiring bank loans, or owning property. Recent years, however, have seen positive developments in supporting the potential of women entrepreneurs in Lebanon. In 2005, various legal and administrative measures were undertaken in support of women entrepreneurs, for example the Labor Code was amended to allow women to work at night, tax laws were revised to ensure gender parity on tax reduction. Various programs, mostly led by international organizations and private banks, were also developed to support the competitiveness of entrepreneurial initiatives and the MSME sector, including female-owned businesses. Yet, many of these lack a gender dimension and a clear understanding of the specific needs of women entrepreneurs, particularly those operating at a small or medium scale. Given the nature of the Lebanese economy, dominated by the private sector with heavy concentration in small enterprises, the country stands to benefit significantly from supporting the prospects of, and increasing opportunities for women entrepreneurs.

What opportunities does the concept of Arab integration offer, and what political, economic, social and cultural developments are needed to achieve the economic prosperity in the region?

For the Arab world to experience improved economic prosperity and human development for all, issues across the region need to be addressed. Only addressing narrow targets for economic growth (i.e. trade) fails to address broader dimensions of the real economy, such as education, standards of living, and welfare. Therefore, in the “Arab Integration: A 21st Century Development Imperative” report, comprehensive reform is put forward as a main goal for the Arab region.

What is the main focus of UN-ESCWA for the year ahead?

ESCWA is working strategically with its Member States in helping them bringing the issues of the region to inform the global discourse on development agendas, including the preparation for the negotiation process towards developing a regional perspective on the Sustainable Development Goals (SDGs); financing for development in the context of means of implementation of the SDGs;and the climate change negotiation process. UN-ESCWA is also analyzing and rethinking the current Arab development model taking into account the challenges from socio-economic and environmental aspects, including the consequences of conflicts and crises. A forthcoming report on Vision 2030 aims to advocate Member States toward realigning their policies and programs in a way that keeps people at the center of development.