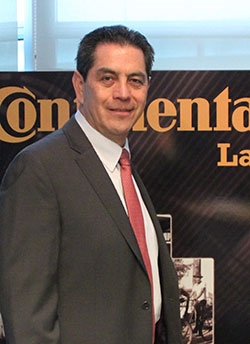 Javier Mendoza Altamirano has been in his current position since 2013. Earlier, he had been National Sales Manager, having previously served as Mass Retail Manager. Prior to joining Continental Tires, he worked at Michelin Mexico Services. He holds Master’s degrees in International Public Law and Maritime and Aerial Law.

Share on:
"With regards to passenger vehicles and light trucks, the key challenge we face is from cheap tires."

Continental Tires arrived in Mexico about 20 years ago. How has your business evolved since then?

Continental arrived in the country through the purchase of Euzkadi and General Tire in North America from Carlos Slim, the richest man in Mexico, and second richest in the world today. Euzkadi was once a family company enjoying a strong relationship with dealers at the time, as was the case for General Tire. When Continental took over the businesses, dealers were not too happy because we are a German company and they tended to assume that a major and difficult shift was underway for them. And yet we managed over this time period to demonstrate our ability to our dealers and to date the success of Continental Tires in Mexico is also the success of the dealers. We are a large family, proud of our distribution network. We were established in 1994 at the time the NAFTA agreement was signed. Continental was aware of the opportunity that the country represented and immediately grasped the urgency of a presence in Mexico. When we came we had three plants, one in Mexico City, another one in San Luis Potosí­ and another one in El Salto, in the state of Jalisco. Today we only have one plant, located in San Luis Potosi, a state in the Bají­o region where many car manufacturers have established assembly plants.

You mentioned your highly successful dealer network. What are its main characteristics?

The tire market normally consists of mono-brands. For instance in Spain, there are manly three brands: Pirelli, Michelin, and Firestone; Michelin holds nearly 50% of the market. Argentina is a similar market, but Mexico is now the most open in the world and characterized by tough competition, especially from tires produced in Asia.

“With regards to passenger vehicles and light trucks, the key challenge we face is from cheap tires.”

How are imports of Asian tires impacting the domestic market?

It is tough to compete against the Chinese-made tires. The Mexican tire sector in radial truck tires grows by 19% annually and is largely driven by the Chinese effect. When you sell Chinese tires, the quality is not as good, but the replacement is quick. For this reason, the market has grown significantly. In a good case with quality tires, you can retread a couple of times, rather like resoling your shoes. The cost per kilometer of cheap tires is higher than with ours, and cheap tires cannot be retreaded. Yet the Chinese government is extending considerable support to 100% Chinese companies. It provides support for land, buildings, taxes, exports, and workforce. Rival prices are 50% below ours, which is seriously denting the market.

About 3 million cars were manufactured in Mexico last year. How has Continental Tires contributed to this success?

Our share of the replacement market for SUVs is at around 9%, having fallen by 35%, although many companies have entered the market in addition to Chinese products, making for a particularly tough environment. The Mexican market sees annual sales of 1.1 million cars, and we hold around a 12-13% market share of these units; we have contracts with Audi, Mercedes, General Motors, Ford, Seat, and Nissan.

What is Mexico’s importance in Continental’s global portfolio?

With regards to passenger vehicles and light trucks, the key challenge we face is from cheap tires. Yet our products result in a substantial 26m difference in braking distance on a wet surface. We achieve about a 4 to 8m difference with other premium products. Our tests hold the record in this respect. Moreover, we have the best rolling resistance against our competitors for truck tires. Earlier in the year we concluded a test with a company located near Guadalajara that is registering a 12% saving on fuel, which is the kind of message we are trying to get across to our dealers and consumers. Continental Tires offer the best technology in the world for brakes and rolling resistance. We operate a plant with 1,100 employees, which makes us the smallest entity, although the figure can rise given demand for additional production.

How have you performed in 2015 so far and what are your expectations for the remainder of the year?

The passenger and light truck market will grow by around 6% for the year, but we target 10% growth. Continental is currently changing its focus in Mexico. We are now pushing and training our dealers to sell our premium tires. We aim for 10% annual growth until 2018, inclusive.