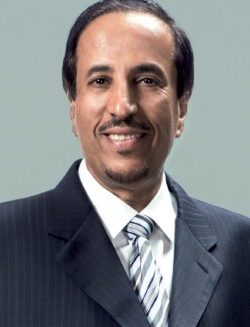 Chairman, Royal Commission for Jubail and Yanbu and SABIC

HRH Prince Saud Bin Abdullah Bin Thunyan Al Saud has a degree in Civil Engineering from King Saud University and is the Chairman of the Royal Commission for Jubail and Yanbu and Chairman of SABIC. He began his career in 1977 as an Engineer for Riyadh Municipality, and has also played key roles in numerous development programs, been a member of several committees formed by Royal Decree, and participated in a host of forums and scientific seminars. He also has a special interest in the field of social and cultural activities.

Share on:
Jubail and Yanbu are now responsible for 12% of the Kingdom’s GDP, two-thirds of its industrial output, and 10% of the world’s petrochemical production. To what policies do you attribute […]

Jubail and Yanbu are now responsible for 12% of the Kingdom’s GDP, two-thirds of its industrial output, and 10% of the world’s petrochemical production. To what policies do you attribute this success?

The success of Jubail and Yanbu as examples of some of the best industrial zones in the whole world can be attributed to many factors, among which are: unique government commitment and support; the application of state-of-the-art international construction and project management methods; excellent co-operation and integration with our strategic partners, such as SABIC, Aramco, and the Ministry of Finance, which ties us together toward one unified objective; the implementation of the city management concept; and the dedication of our professional staff. All of these factors have made our mission possible. The mission is to diversify the economic base of Saudi Arabia.

What growth do you expect at Jubail and Yanbu, especially in exports, since nearly 85% of products manufactured in the two cities are exported?

As stated, we are now responsible for 12% of the Kingdom’s GDP. We shall continue to be influenced by changes in the economy and we shall continue to influence this economy by increasing our share in GDP. I am glad to inform you that we are moving toward a new stage of industrial development through the Yanbu Economic Plan, whereby the emphasis will be on downstream industries, especially non-oil products. This shall include, but not be limited to, iron, services, and manufacturing products.

The average growth rate in annual FDI at Jubail and Yanbu reached 20.2% in 2013. With infrastructure projects such as transnational rail, a major phosphate mine, and a large port maturing in the next five years, what opportunities do you expect to emerge for domestic and foreign companies in Jubail and Yanbu?

Jubail and Yanbu are, no doubt, shrines of industrial development in Saudi Arabia. They both offer a complete platform of infrastructure and service, second to none, with very competitive land-use prices and excellent links to international markets. Jubail and Yanbu are very safe working environments, in a very stable country. What else could you ask for? This is, to say the least, what brought multinational companies like ExxonMobil and Dow to this land of opportunities. However, with our forthcoming economic plans, we hope to diversify our economic base in the two cities to include investment opportunities, especially in downstream industries. We shall be introducing new opportunities in the field of marine, shipment, packaging, iron, and spare parts, especially for power and desalination.

As energy demands rise across the nation and the region, how will the Commission fuel the development of alternative energy technologies?

The Royal Commission is working with its strategic partners to meet this growing energy demand in several areas. The first area is optimizing energy consumption by using modern techniques such as district cooling systems and smart buildings. The second is utilizing state-of-the-art technology for industrial waste recycling such as plasma reactors, which produce hydrogen and electricity. The third is building photovoltaic power stations, and the fourth is concentrating on secondary industries, thus utilizing the outcome of primary industries as feedstock.