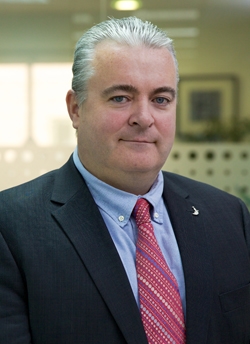 Dave Campbell is the General Manager at BP Oman with accountability for all BP business in Oman and also to safely deliver the Khazzan Development. Prior to joining BP Oman, Dave worked for BP for 23 years, starting in Hull, UK in Petrochemicals and has also worked in BP Solar, NGL’s business and a number of operations roles in Upstream in Canada and Egypt. Dave received a MEng degree in Chemical Engineering from Nottingham University in UK.

Share on:
"ICV is something that we take seriously. It is not a fad; it is here to stay."

Can you tell us about the work that BP has conducted in the Sultanate after winning the exploration contract for Block 61?

BP signed an agreement in January 2007 for the appraisal and development of Block 61. We then carried out one of BP’s largest ever 3D-seismic shoots. It was conducted safely without any safety incidents at all. Then, we did an extensive appraisal program, drilling 11 wells. As part of that appraisal program, we actually developed an extended well test (EWT). We built a facility in the desert that was commissioned in March 2001 and it processes the gas. We produced a small amount of gas that was given to Oman through the grid, but the main purpose of that facility was to get data on the wells and on the flow rates. It also gave us a great understanding of operating in a desert environment in Oman. On December 16, 2013 we signed the $16 billion Khazzan development project for Block 61.

What is the importance of the Sultanate within BP’s operations in the GCC region?

Within BP’s portfolio, the Khazzan gas project is one of the biggest unconventional projects. The operations here are a major part of the BP Middle East portfolio. In fact, the Khazzan gas development is one of the biggest portfolios in BP after Shah Deniz in Azerbaijan, and it is the biggest onshore gas project. It is important to BP, and also to Oman, because once we are successful we will produce, on a gas basis, only one-third for domestic consumption.

“ICV is something that we take seriously. It is not a fad; it is here to stay.”

What sort of investment will be required and will it be fully operational in 2017?

To date, we have awarded $4 billion worth of contracts. We have already drilled our first development well. That started in January 2014, and we are on to our second development well now. We are building roads, well pads, and other infrastructure. The central processing facility (CPF) has been awarded to Petrofac. BP has one rig drilling at the moment. We are also mobilizing two rigs in Nizwa, and they have come from Central Asia, through the Suez Canal, and then into Oman. They are being assembled now. Both rigs are mobilizing to the field as we speak; moreover, we have got three new rigs on the way. By the end of 2014, we could have six rigs operational. I think the main message is that we are in action.

What are the main technical challenges that you are facing?

We are going to mobilize between 7,000 and 10,000 people into the field to work on this development. In that respect, safety is probably the biggest technical challenge. Then, it is the very hard rock, meaning that drilling and hard rock stimulation are challenges as well. But basically, we have so much technology and expertise from lots of other parts of the world at BP, especially from North America. We have people from that business here now assisting and helping with that technology and know-how. With our partners, Schlumberger contractors will use their technology as well as our technology as an advantage. The sheer scale of the project is also a challenge, as we are going to drill 300 wells over the next 15 years.

How is BP supporting and promoting in-country value (ICV) in the Sultanate?

ICV is something that we take seriously. It is not a fad; it is here to stay. I sit on the ICV committee with HE Undersecretary Salim Al Aufi, as do the other oil operators. We are doing many things within our contracts. We have elements of ICV, and we are working on some projects to develop some businesses here in Oman around proper manufacturing, rig construction, and we are also looking at the broader picture of ICV around graduates, which include the colleges and schools delivering across the board from an individual point of view.