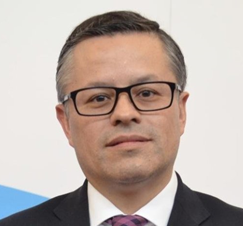 Gabriel is a professional with +20 years of experience developing and implementing domestic and global solutions well known in the logistics industry for his leadership and innovate strategies. He has been Country Manager for Kelly Services since 2015, his vision for talent management needs across key industries in Mexico and the challenges the companies face every day in the talent market and workforce supply chain has taken Gabriel to rethink and develop special tailor made solutions for our business partners in order to connect this companies with the right talent, making their workforce strategy their best ally in their business growth. Prior to Kelly he was the Country Manager for Mexico, leading the Supply Chain Solutions function for Mexico in UPS, the worldwide logistics company leader.

Share on:
“Mexico is extremely important to the company; the country's operations are ranked between fifth and seventh of the group's global business.“

What is the role of Mexico in the global business strategy of the company?

Mexico is extremely important to the company; the country’s operations are ranked between fifth and seventh of the group’s global business. Mexico is among the first 10 countries for Kelly and is an important operation for Kelly globally. We are celebrating 30 years in Mexico, have a presence in 17 industries, and are extremely diversified. There is no industry we do not work in. The industries with the greatest investment in the country are the automotive, aerospace, high technology, science, natural resources, and financial industries. We work in these six industries, which is why we have over 12,000 employees in Mexico. It is practically the whole country. We do not have physical facilities throughout the country, but representatives. We have operations on site, and this sets us apart. Since we are close to our clients, we can understand first-hand the needs of the client and how the service we offer should evolve.

How does the new labor reform affect the industries where you have a presence?

The labor reform has extremely positive benefits. There was no reform of the Federal Labor Law of these dimensions for a long time. More than 500 articles mainly related to labor justice and freedom of association were reformed. This is a consequence of the USMCA, the trade agreement between Mexico, US, and Canada. It was important to modify the labor laws in order to ensure similar circumstances for negotiations between the three countries. Mexico has had a high level of manufacturing for many years. Freedom of association puts all three players on equal footing and allows them to compete with other regions of the world in better conditions.

What is the next step for Kelly in Mexico when it comes to human resources?

The world of work is changing, and Kelly gets it; this is something important that we have to consider if we want to remain successful. After 73 years, Kelly Services seeks to identify the way people want to work today. Kelly Services is rebranding accordingly. Kelly is looking for a situation in which talent is more empowered than ever. In Kelly we believe in promoting independent work and non-traditional working styles to match the new workforce dynamic. The world of work is evolving toward independent workers. Workers are not looking to stay at one organization for many years, in contrast with previous generations. The talent today is searching for experiences, knowledge, and a company whose values match theirs. We must accept that today’s talent is much more qualified. Talent seeks to enter the world of work but also wants a good work-life balance. The new generations does not live to work but work to live. This concept is changing the dynamics of work. A worker can even contribute to more than one organization at a time.

What has been the response of national and international companies in Mexico to non-traditional work structures?

The independent work scheme is different to the flexible work scheme. Independent work in Mexico has certain limitations because it is not regulated. One of the reasons why organizations do not adopt independent work styles is that they are afraid of falling into non-compliance. On the other hand, they have not understood it culturally, and subsequently have not developed processes that help them in its implementation either. Independent/ Non traditional work is not opposed to traditional work, it is complementary. In Mexico, organizations seek to take the first step. First, they seek to promote formal work and then move toward non-traditional work styles. Non-traditional work means flexible schedules and home office situations. Mexico has already taken the first step as a country. Article 311 of the Federal Labor Law already considers telecommuting or home office options. We are evolving in that direction, though we cannot promote independent work until it is properly legislated for. We are behind in comparison to other places, but we are on the way there. Kelly Services surveyed more than 200 decision-makers in different industries globally in the Middle East, Europe, and Africa (MEA), Asia Pacific, and America. The results showed that 65% of those decision-makers already use independent workers. Asia Pacific is the most developed region in this field, followed by EMEA and then Latin America. Brazil, Argentina, and Mexico are more developed than the US alone in this regard. Today, one-third of the world’s workers are freelancers. According to statistics, in the next five years, work on demand will grow by almost 20%. Workers do not want to be in organizations for a long time anymore; they want to invest in their training and development and look for work-life balance while developing a bright future for their careers.

What plans and goals for growth does Kelly MX have for 2020?

The growth of the economy was 0.1% in 1Q2019 but 0.3% in 4Q2018. 2019 did not represent a growth in sales, but a growth in productivity and efficiency. We see better results, and this is extremely positive. Next year, we will not grow by double digits. We will have conservative growth with less than one digit, but we expect that. We hope the stability generated by the actions taken by the government will be reflected in the coming years. We have high hopes that we will see positive things. The Mexican business sector supports the government, and the government is keen to maintain a dialog with the sector nationally and globally. We must get to work; such periods in the economy are always opportunities.