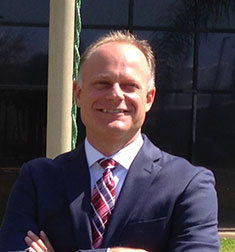 Vincent Guglielmetti took over the General Management of Intel Costa Rica in June 2014. He is a business administrator and holds a master’s in finance from the University of Michigan in the US. He has worked for the corporation since 2000, but it was in 2005 that he arrived in the country to fill the positions of factory manager, manufacturing manager, and controller at Intel Costa Rica.

Share on:
"Today, there are a lot more engineers and finance and HR professionals, not to mention a whole support ecosystem that builds up around that."

Intel Costa Rica hosts the largest research and development center in the country. How does it contribute to the country’s socioeconomic development?

In terms of economic development, when you look at the history of our presence and our original role as a manufacturer, and then you look at the broader sphere of manufacturing, you really see the extent to which the country evolved in tandem with us. Many other new companies followed suit. Today, Intel Costa has more than 2,000 Costa Rican direct employees. However, if you look at the overall effect on the economy, you see there are thousands of additional jobs being created by this presence. There are a lot more engineers and finance and HR professionals, not to mention the whole support ecosystem that builds up around that. Socially, we are conscious of the way the country has been transformed and spend a lot of our time in the math and science fields where we are working with grade schools and at the university level to increase those engineering programs. If you are going to innovate then you need more engineers, and we are working to do that in partnership with the country. There is a lot that we are trying to make happen.

The main advantage of Costa Rica is its workforce, which still suffers from a lack of professional in STEM (Science, Technology, Engineering and Math). How is Intel working with educational institutions to resolve this?

We have actually been partnering with seven different private and public universities in the disciplines needed to prepare our youth for the future of the global economy. We have worked together on curriculum and what kind of electives could fit skill sets needed for the new economy. So far, it has been successful. We are working with private universities because half the student population is graduating from them.

The ‘Intel effect’ refers to a slowdown in the economy after Intel moved its manufacturing operations from Costa Rica to Asia in 2014. What was this process like and in which areas are you investing the most?

A few things happened afterwards. We first announced a Mega Lab, which the president inaugurated. That was the start of something that showed people that Intel was going to continue investing in the country. People were seeing many engineering teams showing up, not to mention all the jobs provided by the lab itself. We had factory engineers that wound up getting new skills and creating new careers in other engineering fields. Though originally only slated to have 1,200 people, within six months there were 1,600. Every quarter, I would come back and show our employees the growth, so that over time I was able to convey a message with data that showed what was happening was real. Recently, I have been showing people a chart of how we looked two years ago and what we look like today. We made the decision then to be a part of the list of companies that were certified as Essential Costa Rica. Second, we recently had nine vice presidents of Intel Corporation here at Intel Costa Rica, which does not normally happen at any other site. Those are signs of our commitment and confidence in Costa Rica and our broader efforts to bring the country closer to having a knowledge-based economy.

Intel is a seven-time winner of the Community Service Award from the Costa Rican American Chamber of Commerce (AMCHAM). Social and environmental responsibility is key to your global operations. What are some highlights of those initiatives?

We are active at the grade school level, in particular by helping in math, science, and technology. We also conduct other activities that make Costa Rica look better from an overall perspective, including both environmental activities and economic innovation-related activities that seek to partner with other companies in doing community service to relieve the country’s social problems. The range of these is pretty wide, but can be defined by three pillars: the environment, community, and education. Therefore, we changed the focus of our CSR several years ago; from traditional volunteering (painting schools or cleaning rivers etc), we decided to switch to more knowledge-based volunteering that gives back to the community based on the abilities, skills, and knowledge that our people have. This includes making an impact on science, technology, engineering, and math (STEM). If the country wants to be developed, is necessary to invest in STEM areas. Hence, working with elementary and high schools and universities and letting kids understand why it is cool to be an engineer is part of what we are doing with the community. If you look at the statistics, you will find that most people without jobs are studying or have studied topics that are unrelated to science, technology, engineering, or math. Only 6% of students currently graduate with engineering degrees. Intel can help by going around and sharing our story to male and female engineers and showing kids why being an engineer can be cool and is a fulfilling way to spend one’s life.