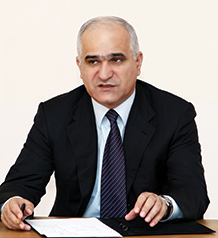 Minister of Economy and Industry, Azerbaijan

Born in 1965, HE Shahin Mustafayev was educated and graduated from the Baku branch of the Institute of Finance and Economics named after M. Voznesenskiy. He started working for the government in 1992, and took on various roles including the Director of the Department of Economic Analysis and Accounting. He was the Minister of Economy of Economic Development from 2008 until 2013. The name was changed to the Ministry of Economy and Industry in 2013 and he has been the Minister ever since.

Share on:
TBY talks to HE Shahin Mustafayev, Minister of Economy and Industry, on the diversification and development of the non-oil sector, and the various projects underway to boost trade relationships.

What are the most significant opportunities that the first European Games have provided for the development of the economy?

The Games have provided a vehicle for the sustainable development of the economy through becoming a foreign investor and a political, economic, and cultural center for the region. The decision to hold the first European Games in Azerbaijan in 2015 is a result of the political-economic stability and international reputation of the country, as well as Azerbaijan’s experience of holding major events and competitions. This event will have a significant impact on the promotion of healthy lifestyles and sport, pave the way for employment growth and infrastructure development, while the increase in the number of visitors will stimulate the tourism and service sector. A positive image of the country will be highlighted, as well as an increase in investment in the long term, while opportunities to host other prestigious events in the future will be created. The athletes and guests who take part will get to know the country better and see the successful development model of Azerbaijan.

What impact has the signing of the Contract of the Century at Shah Deniz had on Azerbaijan’s economy in 2014?

As President Ilham Aliyev stated, the Shah Deniz II project is one of the world’s largest energy projects and one that is focused on energy security and diversification. It will lead to significant changes in the energy geography of Europe and Azerbaijan. According to preliminary calculations, Azerbaijan will receive approximately $200 billion from gas supply to Europe through the Shah Deniz gas-condensate field. These currency reserves will play an important role in ensuring a significant increase of domestic investments in the non-oil economy of Azerbaijan, which will stimulate development.

Economic diversity has become a major priority for Azerbaijan. Which sectors have the most potential for this?

Diversification and development of the non-oil sector is expected to reach the volume of $13,000 GDP per capita, with the volume of per capita non-oil exports around $1,000. The target is to keep the average pace of annual real growth of GDP in the non-oil sector at more than 7%. Industry has great potential in terms of economic diversification. Last year was the Year of Industry, and more than 230 industrial enterprises were created, while the production capacity of existing enterprises expanded. With the support of the government soft loan, over 30 industrial enterprises are being established or expanded. Along with food products, various construction materials, vehicles, computers, solar panels, electrical equipment, and furniture are being produced, and Azerbaijan is self-sufficient in many areas. Products of local industrial enterprises are exported to foreign markets and compete successfully. Under the national development concept, measures will be taken to establish industrial enterprises based on local raw materials at a qualitatively new level, develop various fields of industry, establish a technological chain of production, and expand the potential of exports. The use of innovative technologies in industrial enterprises that stimulate and develop the non-oil industry will be the main focus of the state investment policy. In addition, the development of the industry in other regions of the country is one of the main directions. The Azerbaijan Steel Production Complex will cover all stages from iron ore mining to steel production, and pave the way to meet the domestic demand for steel and iron products. Azerbaijan is already self-sufficient in a number of agricultural and food products, and the quality and range have expanded; 2015 is the Year of Agriculture. Strengthening the transit potential of the country is an important part of the diversification policy. The Baku-Tbilisi-Kars railway will increase Azerbaijan’s role as a major transit hub. The International Sea Trade Port, which is in its second phase, will play an important role in the transport sector. The measures aimed at the improvement of the first telecommunications satellite services of Azerbaijan, launching satellites into low orbit, expansion of e-services and internet traffic, and the creation of a high-tech technology park ensure that ICT will be a priority of the economy in the coming years. The nature of Azerbaijan, its historical monuments, and a rich cuisine provide ample opportunities for the development of tourism. New manufacturing spheres are also now in operation with Gobustan Hybrid Power Plant consisting of modern solar, wind, and biogas stations, Surakhani Solar Power Plant, and a number of wind power plants put into operation.

There has been major development in trade ties between Azerbaijan and a number of countries. How much of a role will trade play in supporting the national economy in Azerbaijan in 2015?

Over the past 10 years, Azerbaijan’s foreign trade turnover increased by 400%, with exports increasing six fold, and non-oil exports doubling. Imports have also more than doubled. During this period, Azerbaijan has conducted trade operations with 150 countries, with the commodity structure of trade and the potential for exports enhanced. The commissioning of Alat International Sea Trade Port, the Baku-Tbilisi-Kars railway, the creation of agro parks and large farms, and the joining of high-tech parks to the production process will play an indispensable role in an increase of the volume of trade, the development of relations with partner countries, strengthening transit potential, and turning the country into a major logistics hub. In addition, the measures on financing the export-oriented production projects at the expense of preferential loans of state, the establishment of logistics centers and trading houses in foreign countries, and the realization of the targets to increase non-oil exports give grounds to say that trade will be expanded in 2015 as well.

What are the necessary steps that need to be taken to ensure that Azerbaijan continues to strengthen its economic position?

Measures will be continued to improve the business environment for the development of entrepreneurship in the country, attracting local and foreign investments, modern technologies, management experience, and the production of high quality and competitive products. In order to attract investments into economy, appropriate measures will be taken to create a more favorable environment for all investors. Further improvement of infrastructure in the country’s regions, the expansion of IT usage, the establishment of business incubators, clusters, tourist and recreational zones, new regional development will be achieved. Over the coming years, special attention will be paid to the development of the processing industry, transport infrastructure, the transition to an information society in the ICT sector, as well as in the development of the space industry. By 2020, the target is for Azerbaijan to be among the “upper middle income” countries according to the World Bank classification of gross national income per capita, and to reach the highest position in the group of high human development countries according to the UN Development Program’s human development classification. In the future, Azerbaijan will be a place with minimal unemployment, an enhanced human capital, a healthy environment and a wide range of opportunities for every citizen.