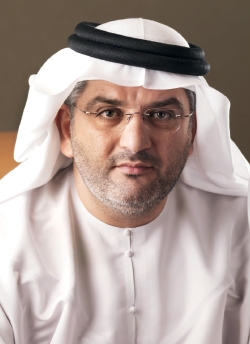 HE Rashed Al Baloushi joined Abu Dhabi Securities Exchange (ADX) in April 2000, where he played an instrumental role in the establishment of the market in November 2000. He began his career at ADX as Manager of the Clearing, Settlement, Depositary, and Registry (CSD) Department. In 2007, he became Deputy Executive, and was promoted to his current position in 2012. Prior to joining the ADX he was Head of the Registrar and Depository at the Abu Dhabi Free Zone Authority. He holds an MBA from UAE University and a degree in Computer Information Systems from Benedict College, South Carolina.

Share on:
The Abu Dhabi Securities Exchange (ADX) General Index recently rallied to its highest level in more than three years. What is spurring market confidence amid so much global uncertainty? In […]

The Abu Dhabi Securities Exchange (ADX) General Index recently rallied to its highest level in more than three years. What is spurring market confidence amid so much global uncertainty?

In terms of performance, the ADX was up by almost 18.5% as of April 14, 2013, making it the fifth best performing market globally. In 2012, the index was up by 9%—there is a constant growth pattern here. We have noticed liquidity returning, and the activity picked up after ADX-listed companies reported good financial results in 2012. Based on a report by Al Fajr Securities, the total aggregate profits for local companies are valued at AED41.8 billion, which is up by 25.8% in comparison to 2011. The cash dividends issued in 2013 were valued at AED15 billion, which is 14% up on the previous year. ADX’s share of the total cash dividend distributed by companies listed on the UAE stock markets is 64%. What’s more, Abu Dhabi’s economy is expected to grow further, and the IMF growth prediction is at 3.1%, while that of the Emirate itself is 5.7%.

How can the ADX become more reflective of the economy in Abu Dhabi?

The economy of Abu Dhabi is expected to have grown by 5.7% in 2013. It is clear that the non-oil sector is playing a bigger role than before, but the key driver is still the petrochemicals sector. However, there are no petrochemical companies listed on the ADX, meaning the main driver of the economy is not present on the exchange yet. There are also many other important sectors that are performing well but are not represented, such as education and healthcare. This means that the performance of the ADX does not reflect the real performance of the economy of Abu Dhabi. In addition, many other large companies operating in Abu Dhabi are not listed on the exchange because they are either private or family-owned companies.

What makes listing on the ADX attractive to domestic companies?

It is a great advantage to be a part of a strong economy with a clear strategy, as is the case with ADX, and our close affiliation with the government through Vision 2030. Another advantage is being a full member of the World Federation of Exchanges (WFE). Actually, we are the youngest stock market to have received this honor since the inception of the organization. These factors ensure that the prospect of listing on the ADX is an attractive one. We are working very hard to promote Abu Dhabi, its agenda, its companies, and its vision. We encourage companies to channel themselves through this vision—that is to market themselves, be promoted, go abroad, and showcase their products. We believe that the liquidity is there and has always been available. It is simply a matter of time, of building more confidence, and of working harder to attract existing liquidity—especially institutional liquidity. If the companies were to take on such tasks, the result would be a rise in the value of their shares, which, after all, is what companies want.

What opportunities are you seeing in the growth of the sukuk market?

In 2012, the GCC was particularly active in terms of issuing sukuk bonds, and in a record performance 54% of issued sukuk bonds were from the UAE. Nevertheless, the local market only carries one convertible bond. Alternatively, we perceive big opportunities for the listing of bonds and sukuks on the ADX. The opportunity will not come immediately given that these instruments are continuously traded over the counter (OTC). This is the prospect we are looking at and we are working with the relevant authorities to achieve it. We have already put the legal framework together and developed the internal set up.