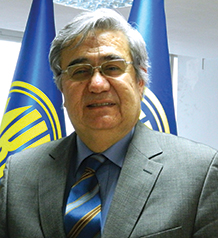 İzzet Artunç graduated from the Naval Post Graduate School-Monterey/US with an MSE degree and also holds a MBA from the University of La Verne. He was the Commander of the Turkish Submarine Group from 2005 to 2006 and Chief of Logistics of the TNFC from 2006 to 2009. He served as the Commander of Turkish Coast Guard Command as a Rear Admiral and retired in 2011. Mr. Artunç has been the General Manager and Chairman of the Board of Directors of Makina ve Kimya Endüstrisi Kurumu (MKEK) since March 2012.

Share on:
What are the highlights of the MPT-76 rifle? We created weapons that combine two major features of weapons design—some weapons aim to have flexible usage, while others are only based […]

What are the highlights of the MPT-76 rifle?

We created weapons that combine two major features of weapons design—some weapons aim to have flexible usage, while others are only based on accuracy; generally, Western standards focus on accuracy and Soviet standards focused on flexible and adaptable usages. We tried to create weapons that combine both aspects. It is more highly capable than what we expected in the beginning. It can be used in any geographical climate that our armed forces operate in and it has the accuracy that is required by our standards. It has passed almost 50 different standard tests and it is still tested to make sure our weapon won’t make any mistakes. We aim to replace the outdated weapons we are using in five to seven years. We believe these weapons are very capable, powerful, reliable, and it’s the rifle that every solider should be comfortable holding.

How do you assess your ability to regularly supply new products?

Our production includes ammunition, small and heavy weapons, powders, and pyrotechnics. We do not cover the side of the defense industry related to electronic software. In traditional weapons requirements, we produce more than 80% of our armed forces requirements. However, we do have a lack of production in some ammunitions and weapons families, because we didn’t initially think it would work economically. Now we are aware that as our export markets expand, we get better position to work in these segments because it’s not limited to just our armed forces requirements, but the whole world market.

What is your strategy to grow your market share in international markets?

To grow your market share in international markets is not the easiest job. Ten years ago, we were relatively unnoticed. There are obstacles and advantages for us and for international companies, so the solution is to work together. One of our advantages is that our labor expenses are comparatively less than European standards and our human resources are very eager to achieve something. We have very young engineers who are eager to test their ability and demonstrate their capability. In Turkey, the defense industry is not just economic, but a matter of national heritage—these two things coming together ensures the success of the defense industry.

What are MKEK’s expectations for the year ahead?

In 2014, our exports went up to $60 million. In 2013, our number was around $40 million. The year before that, it was in the 50s. Because of political instability in the Arabic states, exports slowed. This year, we will start rising again, because we are trying to diversify our markets. The Gulf region was the focus of our company, and now we are trying to diversify in the Far East, North and South America, and some Central Africa states. Also we are trying to export our export philosophy and our services rather than just our products. This also creates new opportunities for us because of our accumulated knowledge and human resources. For the next five years, we are trying to develop our company from the beginning of its journey, which is just production, into a mature and powerful R&D institution. We are cooperating with universities and R&D partnerships and trying to combine our production capability with their R&D philosophy and we are trying to make good projects. No company can have success all by itself; we need to have partnerships and share the ideas and culture.