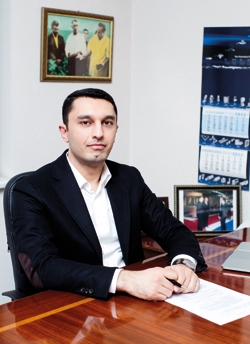 From the Bottom Up

Share on:
What is the history of Karat Holding in Azerbaijan? Karat Holding was established in 1994, and it was a year afterward that the Azerbaijani economy started to make its initial […]

What is the history of Karat Holding in Azerbaijan?

Karat Holding was established in 1994, and it was a year afterward that the Azerbaijani economy started to make its initial steps to recovery. We started as a family business, and we began by trading agricultural commodities such as wheat, grain, barley, corn, and flour. Then, a few years later, we saw an opportunity to process these commodities in our own country, and we changed from importing to processing. We established our own grain-grinding facility, and we started to produce wheat flour. I started working in the company as an engineer in the mills, and then I moved toward sales and marketing, and finally into the office. Now, I am the head of the company. I think that the head of a company must always start from the bottom. It is important to know all the layers of the company.

Do you think the agro-business sector will ever overtake the energy sector in terms of importance and FDI?

It is a well-known fact that agro-business has been important for the past 15-20 years. This is because the population of the world is growing, but crop levels are staying the same. Also, if we add climate change and natural disasters into the equation, there is a severe imbalance in the general world crop ratio. This means that all countries defend their own agricultural sustainability with strict policies. It is imperative to keep rising prices stable. Due to climate change, the amount of crops is declining, meaning that agro-business has become a more important issue not only in Azerbaijan, but throughout the world. The energy sector is important, but I think that agro-business is also gaining more prominence because countries must satisfy and fulfill their agricultural needs—people need to eat. These are issues that affect every country, not just Azerbaijan.

How would you characterize the FMCG sector?

For a producer to reach the level of producing pasta, he must first start at the bottom, which is agricultural commodity trading, then wheat grinding to find further markets for the flour and wheat products. The producer needs to find more by-products, such as biscuits or pasta. We carried out a feasibility study to enter the pasta and spaghetti sector. The tradition of pasta is new in Azerbaijani culture, as it is a foreign way of eating. Starting around our independence, we noticed a growing consumption of pasta, and the per capita consumption rate has increased by over 80%. It is a new product; people who used to eat bread and cheese now prefer to eat pasta with various sauces. I think that it is a part of globalization and people diversifying their eating habits.

Even in Azerbaijan, where there is a tradition of rice, are people still moving more toward pasta?

It is the habit of the people and you cannot direct them; it doesn’t depend on us. If we had made a survey 25 years ago and asked about pasta, people wouldn’t know what it was. However, now people know. They even know the different shapes. Even if there is a stable rice tradition, pasta will still continue to gain ground in the market. I think we have made the correct decision. We market our pasta not only in Azerbaijan, but in foreign countries as well. We started to feel the need to export to different countries such as Georgia, Turkmenistan, and further afield to some African and Asian countries. We have lowered our costs during production, and we have found a good marketing policy. I think that it is a new market for us and, since 2010 we have been looking for new opportunities. The “Made in Azerbaijan” label is starting to become more popular in West African countries, the Philippines, Georgia, and in some Central Asian countries.

How popular is your animal feed production?

Animal feed is a byproduct of our grinding process. Around 25% of the grain that is ground can be used as animal feed, which we call bran. I think it is the second or third most demanded product from us. Bran is not so much a movable product, and we prefer to protect our own farmers by selling the bran here. It is very good for the poultry and meat industries. The more we sell here, the lower the cost of beef and chicken becomes.

What are your views on the current economic climate in Azerbaijan?

We think that there has been a serious step forward over the last 10 years since our current President has been in power. We have observed a step-by-step increase in the economic climate, and we consider Azerbaijan’s role not only as an energy producer, but also as an economic power in the region. Azerbaijan has become a hub for nearby countries, and many economic projects have been started throughout Azerbaijan. This is due to our President’s professionalism and his endeavors. Azerbaijan is recognized by NGOs and auditors as a leader in the region, and we have partners that conduct business in many countries. We have a lot of suppliers for instance, from Switzerland to Uzbekistan. The agricultural sector is a very diverse world, and we have many partners who come to visit us. Azerbaijan is unrecognizable from year to year, and this is because of its economic strengths. Over the past decade, it not only displayed an internal growth of business, but also local companies have grown so much that we have started to open up to foreign markets. For example, Karat Holding has grown over the last 10 years, and it has opened up to the nearby countries of Georgia and Russia. This means that Azerbaijan-based capital has started to enter nearby countries, which hasn’t been observed for many years. We also own milling facilities in Georgia and 30% of Georgia’s flour is produced by Azerbaijan. The Azerbaijani economy has grown so much that we have not only managed to stop the imports of basic foods, but we are now producing and exporting them as well.

What are the medium-term plans for your company?

We are always thinking of motion, which means we always want to grow our business. We are concentrated on our own business and sector; we don’t want to invade other sectors because it is very difficult for us to diversify and it could have severe results. We want to grow in our own field and expand. For example, in 2013, we are willing to add one more brand to our portfolio and expand to one more market, maybe Ukraine. Since 2007, we have modernized all of our mills in Azerbaijan to the same standards as mills in Germany or Switzerland, which have much higher standards than Russia or Turkey. Our plans are to bring our facilities in Georgia up to European standards in the medium term.