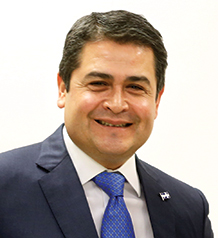 Juan Orlando Hernández completed his studies at the National Autonomous University of Honduras (UNAH), where he graduated with a degree in law and social sciences. He was a lawyer and notary and then earned a master’s in public administration with emphasis on legislative from the State University of New York at Albany, in May 1995. He was a member of several law firms and Professor of Constitutional Law at the Faculty of Law and Social Sciences of the National Autonomous University of Honduras. In 1997 he won the first Liberal MP for Lempira and was subsequently elected as First Secretary of the Board, before leaving Congress to pursue his presidential campaign.

Share on:
TBY talks to Juan Orlando Hernández, President of the Republic of Honduras, on the incentives put in place to encourage business between the two countries.

What advantages and incentives do Peruvian investors enjoy when doing business in Honduras?

In terms of investment, we agreed on an FTA and this presents the provisions agreed upon by which we give legal security to investors, including also provisions for the regulation and protection of Honduran and Peruvian investments and investors, ensuring compliance with the principles of national treatment, most favored nation status, minimum standard of treatment in accordance with customary international law, implementation of environmental measures, as well as special treatment in case of unrest, expropriation, and compensation. It also incorporates a special mechanism to resolve investment disputes. On top of that, Honduras is an attractive and opportunity laden market in sectors such as infrastructure, tourism, agribusiness, and services, in which we enjoy a favorable legal framework established by the Law on Promotion and Protection of Investment approved in 2011 and the Law on Public-Private-Partnerships, among others.

An FTA between Honduras and Peru was recently signed. How do you expect this new agreement to promote trade between the two countries and how attractive is the Peruvian economy for Honduran companies?

Thanks to the realization of the treaty, we open Honduran exports to a market comprising a population of 31.1 million, offering an interesting range of opportunities for both Honduran agricultural and industrial exports to the Peruvian market. In South America, Peru is the fifth destination of Honduran exports and the third country with the largest volume of imports from Honduras, after Colombia and Brazil. Strategically, Honduras will be favored in the medium term to serve as an import-export traffic route from countries like Chile, Peru, and other South American countries in the Pacific, offering its already underway logistical advantages and construction plans—future construction of the Port of Amapala, the Palmerola Airport, the Dry Canal corridor, extending the CA-5 highway, and the modernization of Puerto Cortes and Puerto Castilla represent both advantages and attractive points for investment, as well as import and export activities through Honduras. The treaty gives the signatory parties a legal framework for clear, stable, and transparent rules to regulate trade, services, and investment, as well as mechanisms to avoid the application of discretionary measures unjustifiably affecting trade, establish legal security and predictability for economic operators, expand options for consumers to purchase goods and services, and found effective and transparent procedures for the settlement of disputes. It also expands opportunities for the productive sector of Honduras to take advantage, with interest and determination, of the economic spaces that are created with the entry into force of the treaty. The trade balance between Honduras and Peru leans at this time in favor of the latter; however, with the recently signed FTA, Honduran companies are expected to take advantage of the benefits granted in this instrument through access to markets that allow productive linkages and opportunities to diversify market portfolios. The treaty will help the Peruvian market to open its doors to our products. It is a market little explored by Honduran businesses. The strategic value of the FTA with Peru is that we can allow access to the bloc of the Pacific Alliance, which is of interest to Honduras. But we have to work more on the Peruvian market; we will help our entrepreneurs to find business opportunities there.

In 2015, Peru’s Trade Minister and the Secretary of International Cooperation of Honduras had a meeting in Lima. What areas were identified as those with the greatest potential for cooperation between the two nations?

Within the framework of that meeting in Peru in 2015, both parties reaffirmed priorities within the context of our mutual cooperation and the need to further promote dialog spaces for a fruitful exchange of experiences, best practices, and technical assistance, stressing the importance of realizing the Third Joint Commission, in which we will negotiate the following sectors: school meals, handicraft, mining, housing, and MSMEs.