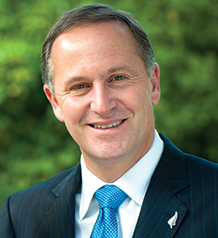 John Key has been the Prime Minister of New Zealand since November 2008 and leader of the New Zealand National Party since November 2006. Born in Auckland, he grew up in Christchurch, and attended Burnside High School and then gained a bachelor of commerce from the University of Canterbury. He launched his investment banking career in New Zealand in the mid-1980s. After 10 years in the New Zealand market, he headed abroad, working in Singapore, London, and Sydney for US investment banking firm Merrill Lynch. In 1999, he was invited to join the Foreign Exchange Committee of the Federal Reserve Bank of New York and on two occasions undertook management studies at Harvard University in Boston. In 2001, he headed back to New Zealand to stand for Parliament for the National Party.

Share on:
TBY talks to John Key, Prime Minister of New Zealand, on strategic ties between his country and Thailand and ASEAN at large.

The TNZCEP was one of New Zealand’s first trade agreements and has helped create significant trade and economic benefits for both countries since it came into force in 2005. Through improved market access, customs procedures and trade facilitation, increased efficiency, and enhanced profitability, as well as the transfer of technology and skills for businesses, trade volumes have more than doubled in the last 10 years. Thailand is now New Zealand’s eighth-largest trading partner with total trade between our two countries worth NZD$3.25 billion. Thailand exports mainly manufactured goods to New Zealand, while New Zealand primarily exports agricultural goods and wood to Thailand. While there is some work to do in relation to services and the safeguards that apply to some dairy and meat products, we expect this trade agreement will continue to strengthen our important economic partnership.

During your previous visit to Bangkok, you suggested that Thailand could become a key hub for New Zealand’s investors looking to expand into the region, with a particular focus on the F&B, logistics, IT, and manufacturing sectors. Over two years later, to what extent have these goals been met and has New Zealand since made any revisions to its strategic economic interests with the Kingdom?

Taking a long-term view, New Zealand continues to recognize Thailand’s potential as a strategic hub for investment in the region. It is geographically located in the center of Southeast Asia and is the second-largest economy within ASEAN. Significant infrastructure proposals such as high-speed rail connections to China are promising and would further incentivise investment in Thailand and the region. A number of New Zealand manufacturing, logistics, ICT, and F&B companies have established a presence in Thailand, and a number of dairy, beef, and fruit exporters are using Thailand as a hub to explore other markets in Laos, Cambodia, and Myanmar.

What impact does the recent integration of the ASEAN Economic Community (AEC) have on New Zealand’s strategic relationship with the region?

The AEC presents a great opportunity for New Zealand to further our relationship with ASEAN and the AsiaPacific region, and expand our trade and economic links. In 2015, we celebrated the 40th anniversary of New Zealand-ASEAN relations. Two-way trade between New Zealand and ASEAN has increased nearly 100-fold, from USD133 million in 1975 to USD10.6 billion in 2015. Much of this growth has been underpinned by the ASEAN-Australia-New Zealand Free Trade Agreement (AANZFTA), which has been the cornerstone of our trade and economic relationship with ASEAN. New Zealand is supportive of initiatives that broaden regional economic integration such as the AEC. Mega-regional free trade agreements—the Regional Comprehensive Economic Partnership (RCEP), the Trans Pacific Partnership (TPP) and the Free Trade Area of the Asia-Pacific (FTAAP)—seek to broaden ties of economic cooperation between countries in our region. The more New Zealand can link into such agreements, the more New Zealand is able to contribute and benefit from regional prosperity and future economic opportunities.

What are your expectations for New Zealand’s bilateral relations with Thailand in the year ahead?

We are looking forward to realizing the full potential of the bilateral relationship when Thailand returns to democratic governance. In the meantime, our people and business links with Thailand remain strong. Every year, more than 40,000 Kiwis visit Thailand and more than 20,000 visitors arrive in New Zealand from Thailand. Thai Airways has just increased its scheduled flights to Auckland and I expect tourism will be an important area of continued growth. Thailand is New Zealand’s largest source of international students from Southeast Asia and our educational institutes continue to build partnerships and foster connections. In 2016, we commemorate 60 years of diplomatic relations between our two countries. Special events are being held in both Thailand and New Zealand throughout the year to celebrate this special milestone.