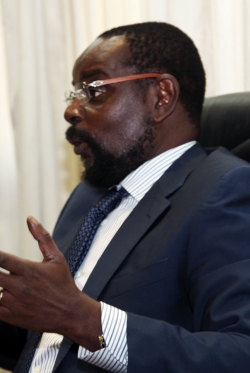 Minister of Transport and Communications, Mozambique

Paulo Francisco Zucula was born in 1955 and is an expert in development. Between 1989 and 1992, he was the Deputy Minister for Agriculture, and before his appointment as Minister for Transport and Communications, he was the National Director for the National Institute of Disaster Management. He graduated in Agronomics and Agrarian Development from the University of Minnesota.

What are your main priorities in transforming Mozambique’s transport infrastructure?

The current transport infrastructure in Mozambique comes from colonial times. The Portuguese and the British colonial administrations used Mozambique as a service economy and gateway to Britain’s nearby colonies. Therefore, all the infrastructure was designed with an East-West orientation. That was good, except it didn’t do much for the country, which has a predominantly North-South orientation. Throughout the world, in terms of modes of transport and not considering air, sea is the best method, followed by rail, then road. In Mozambique, it was historically the other way around; road first, rail second, and sea third. The whole strategy is to change this setup, especially considering Mozambique is a long and coastal country. Roads will also serve to connect the rail to the sea in an East-West orientation. The presence of mineral resources has helped us shift priorities. Priority number one is to finish the Sena line, which is the shortest distance between the coal mines of central Mozambique and the Port of Beira. Priority number two is a new railway, called Macuse, which will come from Moatize to a new port in Zambézia province—the exact location is still being determined. The third priority is for a railway to connect the country to Botswana via Zimbabwe for coal export purposes. Then we have two more lines, one going to Nacala Port through Malawi and another one to Nacala that remains in Mozambique. The main ports in our country are Beira, Maputo, Tete, and Nacala. A new North-South line is going to be built in pieces, in order to take advantage of the locations of coal reserves. In five years, I would like to see 3,000 kilometers of railway operating. If we don’t have everything running we will lose valuable investments from foreign companies.

Where are you targeting the $500 million that you spend annually upgrading Mozambique’s transport infrastructure?

That $500 million has been spent mainly on two main ports, Maputo and Beira. In Maputo, it was for dredging the channel, building new terminals, and expanding the existing ones. In Beira, it was also spent on dredging and building coal terminals. One of them is finished, and now we are working on the second one. Some of the $500 million investment also went toward our airports, which are not driven by coal but by tourism. We are revamping most of our airports and modernizing the infrastructure. We finished Vilankulo first, which is a tourist area, and now we are finishing up Maputo. We have also been doing some reconstruction in Beira, Quelimane, Nampula, and Tete. We’re going to start work on Nacala Airport, and in 2013 we will start to build two new airports, one in Pemba and one in Tete.

How are you working with private entities?

Most of our projects are carried out in partnership with private entities. They put most of the money in, then operate and manage the projects. This is the case in Quelimane, Beira, and Nacala. We have just finished negotiating with Vale regarding the railway line from Tete to Nacala through Malawi. Negotiations are starting with a Chinese consortium and a Kazakhstani group on further projects. Most projects operate under a public-private partnership (PPP) model, except for the airports, for which we borrow and then construct.

To what extent is Mozambique important to the Southern African Development Community (SADC) in providing transportation and access for its landlocked neighbors?

Mozambique is one of the founding members of the SADC, and we have been involved with it for many years. We are also a signatory of the Almaty Declaration, which obliges countries like ours to serve as a gateway for imports and exports to and from landlocked countries. In addition to that, we are discussing a huge agenda in terms of regional economic integration. One of the fundamental aspects of regional integration is the movement of goods and people across borders, and for that, this country is of significant importance. The huge infrastructure program for African development has gone way beyond the SADC to East Africa. A railway connecting Cairo to South Africa is also being planned, and Mozambique will also be connected to it.

What has been the impact of the Maputo Corridor on the potential for an increasingly favorable investment climate for Mozambique?

The Maputo Corridor was one of the first such corridors, and it was developed purely on a PPP basis. We started planning it in 1986, and five years later we had about $2 billion. Now, we have about $4 billion or $5 billion including energy, highways, railways, and border crossings. The scoping exercise was done under the SADC context, until we discovered coal. First, we thought we had 3 million tons, then realized it was 12 million tons and later revised that to 100 million tons. It is thus a significant corridor.

What is the current status of the Northern Development Corridor from Tete to Nacala?

Building is underway to rehabilitate this corridor. There is currently a study being conducted by a Japanese group on the old port because it needs to be modified to provide more space for other commodities such as those from the agriculture sector. At the same time, there are studies on the ground to build an airport in Nacala, too. In the near future, Nacala is set to surpass Tete as an air transport hub.

The laws to negotiate on behalf of the government for port concessions have recently changed. How will this directly change the way that concessions are made for ports in Mozambique?

These are simply new elements in the old way of carrying out concessions. First, we aim to promote social inclusion, and second, the transfer of technology. This is something that has proven challenging in the past, since the logistical operators see the infrastructure as being more efficient if it is dedicated to one commodity. However, they have to accommodate other users. We finished a round of negotiations with Vale, which ended up being a success, and now it is training a large number of people.

How are you expecting the value-added of this deal to manifest itself?

This is not within the concession contract, as such. It is, instead, a part of government policy as a whole. We do have a vision, but we don’t impose it on anyone, although we do encourage it. We have a project to build an iron smelter in Nacala. That will encourage the processing of iron ore and coal as well. We are also putting together a strategy to generate electricity. We envisage incentivizing value-added production. In Phase I, we will obtain the raw materials, and then Phase II is the processing phase. The challenge in terms of processing is that you need to have more than one raw material in order to make processing viable. We are not at that stage yet, but we will reach it.

What levels of investment are you looking at to rehabilitate the airports?

We are looking at around $1.5 billion in total. That includes building new airports as well as lengthening runways and modernizing airport terminals. This investment only covers large airports. We have many smaller airstrips throughout the country that are not covered by this plan.

Aviation will drive development not just with regard to businesses but people as well, as they need a safe way to travel quickly. It can take up to three hours to fly from the north of the country to the south. Aviation will also promote tourism, as airlines are a marketing medium and connect the whole tourism development chain.

With these new airports and increased capacity, what sort of opportunities are there for private investors within the aviation industry?

There are opportunities in maintenance, catering, and non-aviation services within the airport, such as duty-free shopping. That is how most airports make money. Airlines will also bring in increased revenues. In two years, the number of airlines serving Maputo Airport increased from two to five. Qatar Airways started flights from Doha in 2012, and we are also in talks with Lufthansa and Emirates with regard to opening direct flights from Germany and the UAE. Domestic air travel will also soon open up to foreign investment. However, for now, all airlines that want to operate in Mozambique have to be locally registered entities. Soon, Nacala, Pemba, and Tete will also start seeing more direct international services arriving at their airports.

What is the current situation regarding the regulation of mobile operators in Mozambique? Is the government doing anything to promote increased entrance to the market in the communications sector?

Not exactly. We already have a regulatory body that governs communications. Telecomunicaçíµes de Moçambique (TDM) runs the fixed-line market and there are three mobile operators. What we are doing now is to put together a commission to look at the implications of communications convergence.