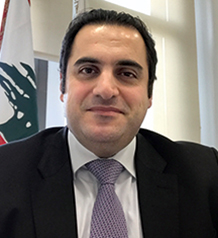 With 20 years experience in the oil and gas sector, Wissam Chbat graduated from the American University of Beirut with a bachelor’s in electrical engineering and holds a master’s in finance from the Ecole Supérieure des Affaires-Beirut and ESCP-EAP Europe. He joined Schlumberger oilfield services in 1997 and held various field operations positions and gained considerable technical experience in challenging operations such as under-balanced wells, HPHT, and deep-water operations. He has worked in Venezuela, Indonesia, South Africa, Algeria, and India before joining the Lebanese Ministry of Energy and Water as the upstream advisor to the minister in late 2009.

Share on:
The first oil exploration contracts are expected to be signed before the end of 2017. What strategy will LPA follow to evaluate the bids? After signing decrees that were pending […]

The first oil exploration contracts are expected to be signed before the end of 2017. What strategy will LPA follow to evaluate the bids?

After signing decrees that were pending for three and a half years, we renewed the launch of the bid round and started a new qualification round that resulted in eight new companies prequalified to bid. There are 51 companies in total, and these are classified into two categories: operator and non-operator. The operator has more skills and financial strength, i.e. total assets amounting to more than USD10 billion and experience in drilling and completing developments in 500m-deep waters. For non-operators, they should have total assets of more than USD500 million and established oil and gas production; they have to prove that they are producing because we want exploration and production (E&P) companies. We currently have 13 qualified companies classified as operators while the rest are non-operators. We require a minimum of three companies to go into joint ventures to bid for one block. There should be at least one operator present among these three, and the operator will form the consortium. The individual companies forming the consortium will have to pass each other’s internal controls prior to forming a consortium. The deadline to submit the bids is September 15. A month later, the LPA will assess the results, prepare its report, and send it to the minister. The decision would be taken at the level of the Council of Ministers, starting in theory on November 15. However, looking at the recent political developments with the parliamentary elections taking place in May 2018, the current government has every incentive to award the contracts before the year’s end.

As the regulator, how does LPA provide the companies a secure environment to invest in?

LPA has a regulatory role, though it does not regulate prices. Our role is to monitor, manage, and supervise the petroleum activities. The LPA is divided into six departments and each department is led by a department head who is also a board member, so we have six board members. For the last four years, our engagement with the companies was mostly promotional. In addition, we have worked on transparency by announcing our intent to join the Extractive Industries Transparency Initiatives (EITI). The importance of EITI is that it puts for the first time three parties on the same table: the government represented by the ministry and the LPA; the companies that will operate; and civil society, which will monitor this activity and ensure it is done correctly. This is the importance of EITI; it is a platform where these three parties can discuss.

What specifications do you have for exploration and production-sharing agreements aimed at boosting the local economy?

After giving the awards, these companies will need to subcontract other services, and we therefore have a model contract based on a production-sharing one in which companies will invest and then recover their production costs. If we have a solid and developed service industry in Lebanon, this cost can be re-injected into the Lebanese economy and this will even further boost our GDP and improve the oil and gas sector. We also require that local workers make up 80% of the workforce. This will be extremely challenging for us to monitor and for it to be achieved. In the event that they cannot, we can help with solutions for a period of time.

What are your main goals and priorities for the year ahead?