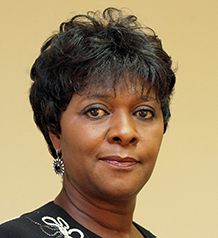 The Hon. Margaret Mwanakatwe is currently involved in several ventures, with the main one being gold refining. She is involved in the construction industry in the area of roofing. She was the Managing Director of Barclays Bank of Ghana Limited, the first female to occupy that position. Prior to that, she was previously the Managing Director of Barclays Bank of Zambia. There too she was the first female and the first Zambian to hold this position. After Barclays Ghana, she joined United Bank for Africa (UBA) as the Regional CEO for the East and Southern Africa region, where she was tasked with the expansion of UBA in this part of the continent. She possesses strong and effective communications skills with the ability to establish and maintain effective relationships and strategic alliances with key players in the private and public sectors, government, and international organizations.

Share on:
TBY talks to The Hon. Margaret Mwanakatwe, Minister of Commerce, Trade, and Industry, on the TFTA, the advantages of investing in Zambia, and MFEZs.

What is your assessment of the meetings in Egypt recently regarding the Tripartite Free Trade Area (TFTA)?

The launch of the TFTA and the signing of the TFTA signify an important political milestone towards the establishment and operation of a fully-fledged free trade area. It represents free movement of goods and services from Cape to Cairo, bringing together a market of over 625 million people, living in one of the fastest growth areas of the world with a booming middle class in 26 countries and a combined GDP of $1.3 trillion, about 60% of the African Continent’s GDP. For Zambia, the TFTA represents a significant market for Zambian goods and services once effectively exploited. Total merchandise exports by TFTA members as of 2014 was $145 billion and merchandise imports of $211 billion.

What incentives should be provided to move small entrepreneurs into the formal market?

One of the key drivers of business informality is the high cost of doing business. When the procedures for starting a business and the licenses are expensive with tedious procedures, entrepreneurs avoid that cost by operating informally. This is why the Private Sector Development Reform Program is an important national priority. The measures to reduce the cost of doing business are bearing fruit as registration of SMEs at the Patents and Companies Registration Agency has grown substantially. Local authorities are now implementing single licensing systems to make it cheaper and more effective to formalize small businesses. We have now put in place a Business Regulatory Act and institutional framework that will mainstream tools such as Regulatory Impact Assessment into our policy-making systems.

What are the comparative advantages of Zambia over neighboring countries, and why should an investor choose Zambia?

Zambia’s comparative advantages lie primarily in its abundant resources. It has vast land, 752,614 sqkm, with a population of approximately 15 million people, with over 70% of the population below the age of 40. We have vast natural resources in terms of minerals, tourist sites, water, and land for agriculture. The country has had a stable economy with growth averaging 6% over the last decade, stable inflation averaging 7% over the last five years as well as a stable political and social environment since the country gained independence in 1964. In terms of doing business, we are ranked fifth in Sub-Saharan Africa and third among the SADC Countries fourth in COMESA and eight in the whole of Africa pointing to the conduciveness of our business environment over most of our neighbors. We share borders with eight countries. Our central location in the region gives us a competitive market. Zambia has no controls on prices, interest rates, foreign exchange transactions, free repatriation of earnings and repayments as well as security and guarantees of full and fair compensation for investors.

How do you describe the evolution of Multi-Facility Zones (MFEZs) and their role in achieving the three objectives of the triangle of Hope?

The main objective of the MFEZ program in Zambia is to catalyze industrial and economic development through increased activity in the manufacturing sector with value addition to the numerous natural and agricultural raw materials. The zones are designed to provide a superior industrial and business platform. To date, three MFEZs have been established and are now fully operational. These are the Chambishi MFEZ on the Copperbelt, the Lusaka East and Lusaka South MFEZ’s in Lusaka. The Chambishi and Lusaka East MFEZs are privately developed, while the Lusaka MFEZ is publicly owned. Over $1.5 billion has been invested in MFEZ’s by developers and enterprises operating in the MFEZ’s and in excess of 9,000 jobs have been created. More MFEZs are to be established. These includes an MFEZ in Maamba in Southern Province, Kalumbila and Lumwana in North Western Province and Chembe in Luapula Province.