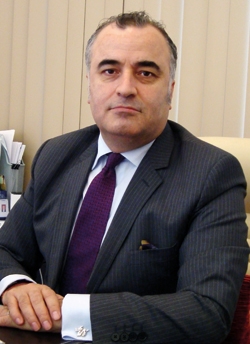 Ümit İnanç has been the CEO of DAAX Corporation based in Azerbaijan since 2010. He has also been a Member of the Board of Directors of DIA Holding since 2011. In the past, he was General Manager of Ocean Energy based in Dubai, as well a Member of the Board of Directors of Etsun in 2005. He graduated from the Faculty of Economy at Dokuz Eylül University in Izmir, and during his education he worked in various sectors. After graduating, he worked as an Accountant. In 1989, he started at Etsun as an Export Specialist before moving on to the position of Export Manager and then Assistant General Manager.

What is the history of DIA Holding in Azerbaijan?

DIA Holding was formed in November 2006 and started its operations in Azerbaijan in December 2006. DIA Holding was established in Dubai as a joint venture company between two prestigious, powerful, and innovative firms. One of the companies was IC Investment Holding, a Turkish partner that is a well-known group in construction, tourism, energy, industry, and port operations. The other company to form the partnership was Intersun Holding, which is a leading company in the Gulf region that specializes in petroleum, tea, vegetable oil, construction, FMCG marketing, banking, and insurance.

What are some major construction projects that you have been involved with in Azerbaijan?

We are the main contractor on various projects in Azerbaijan. Some of the more prestigious projects we have worked on are Flame Towers, the Heydar Aliyev Cultural Center, and the Shahdag Summer-Winter Tourism Complex Project. The Flame Towers project is located on the Caspian Sea in Azerbaijan. The site is situated on a hill overlooking Baku Bay, the old city center, and a park. With a site area of approximately 28,000 sqm, the project consists of three main buildings—office, hotel, and residence towers—and a mall that links them. The total built-up area (BUA) of the project is approximately 245,000 sqm. The concept belongs to HOK, and DIA Holding designed the details of the project. The Heydar Aliyev Cultural Center will provide the city with a major new venue and landmark. Dedicated to the founding President of Azerbaijan, the center will house a conference hall, an auditorium, a library, a museum, and food and beverage areas. The site will take up just over 100,000 sqm. The concept was designed by Zaha Hadid. The Tourism Complex in Shahdag will be developed in several stages and accommodate up to 10,000 visitors in various hotels when completed. In addition, a comprehensive tourism program will be developed for the visitors, engaging in both summer and winter activities.

What projects are you involved in abroad?

DIA Holding has been awarded as the general contractor of the Bilkent Integrated Health Campus Project, located in Ankara, Turkey. The project consists of a health campus with a total capacity of 3,662 beds and will serve Ankara, as well as nearby cities. The campus will have 1,350 doctors, 2,750 nurses, and 2,580 assistant personnel with a total capacity of 20,000 patients per day. DIA Holding has a contract to be a service provider for the health campus for 25 years. The whole project is valued at ‚¬1.1 billion, and will be financed through public-private partnerships (PPPs) with various international financial institutions.

How would you describe the investment climate within the Azerbaijani construction sector?

Azerbaijan is a rapidly developing country, and the future potential in the construction sector is huge. Economic resources pave the way for further development in Azerbaijan, and the human capital potential here makes the country an attractive investment location.

What changes have you seen in the economic development of Azerbaijan during Ilham Aliyev’s tenure over the past decade?

The economic development of Azerbaijan is far from negligible, and countries around the world have recognized the importance of the country in the region. Considering the economic growth over past 10 years, there are many reasons for being optimistic about the future of Azerbaijan. There are several enormous construction projects in Baku that have already taken a significant place in the region. Baku has a more significant standing than nearby cities on account of its cultural background, climate, and historical value.