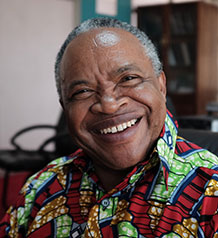 Prof. Jumanne Maghembe was born in 1951 and has an academic background in forestry and has taught in Tanzania and the US. He is currently the Minister of Natural Resources and Tourism, and was previously Minister for Water Resources, Minister for Agriculture, Food Security and Co-operatives, Minister for Education and Vocational Training, and Minister for Labour, Employment and Youth Development.

Share on:
"We need modernize our techniques for detecting poachers."

In January 2016, the government increased the Ministry of Natural Resources and Tourism’s budget in recognition of its importance as a key economic sector in Tanzania. What are your priorities for using these funds?

The Ministry of Natural Resources and Tourism is responsible for forestry, wildlife, tourism, and national heritage so our investments will clearly go into these areas as a direct or indirect contribution to the economy. In the forestry sector, we will invest more in tree planting in new extension areas, the protection of existing forestry resources for water catchments, and the creation of new nature reserves to ensure total conservation of areas with exceptional flora and fauna. We have eight nature reserves in Tanzania. In the wildlife sector, our main investments will go into anti-poaching efforts. We will also invest in improving infrastructure, especially access into our national parks, because wildlife is our main tourist attraction. We are opening up the western region of the country; where we have chimpanzees in Gombe Stream National Park and in the Mahale Mountains bordering Lake Tanganyika. We also have Katavi National Park, which is a pristine park in western Tanzania. We are also opening up the southern tourism circuit. We are extending the airport in Iringa so that it can take larger aircraft and we are planning to invest in the road between Iringa and the Ruaha National Park. We intend to open up the Udzungwa Mountains National Park where a new primate species to be discovered recently.

What is the new administration’s position on coordinating with international institutions to help reduce and prevent poaching?

Our policy has three levels. The first is coordinating with the international community, because if there is no demand for ivory in the world poaching will cease. We are working with the international community to get everyone on board with the idea that only elephants should wear ivory and that every person wearing a piece of ivory represents the death of an elephant that was killed for that piece of jewelry. At the regional level, we are cooperating with our neighbors that also have elephants and coordinating with them so that we can apprehend poachers together. If poachers flee Tanzania they can be apprehended in Kenya, Uganda, Rwanda, Zambia, or Mozambique. At the domestic level we are making a lot of changes. Firstly, we need modernize our techniques for detecting poachers. We have a monitoring system in place now so that we can respond to instances of poaching immediately. Secondly, we are arresting not only the people who shoot the elephants, but also the ones who cut off the tusks, transport the ivory, sell to the middlemen in the big cities, and those who export it to countries like Vietnam. We cannot do this alone; therefore, the new government has formed an inter-agency taskforce to deal with poaching, terrorism, drugs, money laundering, and other vices. This taskforce works with the Ministry of Natural Resources and Tourism to deal with poaching. With this change in our approach we have apprehended and jailed most of the big players who were running this business. We have recently apprehended poachers from Guinea, Ghana, Kenya, and Uganda who were working in Tanzania.

What is your opinion on applying VAT to tourism services in Tanzania, particularly as Kenya, your main tourism competitor, has removed it due to the negative impact it had on the industry?

In 2007, Tanzania pushed strongly to develop the tourism industry and we enacted our Tourism Act in 2009. One of the first actions we took under that legislation was to allow tourism services companies to operate in a tax-free environment to help them grow. We envisaged that they would need this assistance for around five to six years. In 2015, we realized that the time had come for the tourism sector to pay its share of tax like all other sectors. By that time, tourism had grown to 17% of GDP and Tanzania was earning 25% of its foreign currency from tourism. We cannot have a small farmer paying taxes and huge business with a turnover of millions not paying their share. The second point is that Tanzania is moving away from its dependency on donor support and we have to be able to stand on our own feet. The country’s dependency on donor support is around 18% now, down from about 54% when I was first a minister in 2006. We will not be able to stand on our own feet if a significant part of the economy does not pay tax. Moreover, foreign donor country support is provided through taxpayers money in those countries and we cannot expect their tax dollars to support foreigners who are not even paying their own taxes. This is part of the rationale for our decision. The scenario in Kenya is different. In 2012, the number of tourists visiting Kenya was about 2 million, but it fell to 1.3 million in 2015. On the other hand, Tanzania is probably the most peaceful place in Africa, so you cannot compare the two countries’ strategies. Kenya is our good friend and neighbor, but it has its own policies.

How do you see tourism flows evolving in Tanzania?

The biggest shift will be to diversify our tourism product from Serengeti National Park, Ngorongoro, and trekking Kilimanjaro to include going to the beach afterwards. We have the best beaches on the East African coast; for example, on Pemba Island. We are talking to investors to create land for tourism near Dar es Salaam and another project to build a big marina in the South of Kilwa. One of the biggest problems we have had so far in trying to grow tourism in the west and south of the country is that people usually have to travel to these areas by small 12 to 15-seater aircraft and the airfares are high. However, from October 2016 with the arrival of new aircrafts of Air Tanzania you will be able to travel on regular flights to Kigoma, where there is a chimpanzee park at Gombe, which is pristine. Then, on to Dar es Salaam for USD150 instead of having to pay USD1,600 for chartered flights. We are also planning to improve the airport in Iringa to establish a tourism base for this region. The new aircraft being acquired will help us to do this.

How are you responding to the threat of the climate change to make the tourism sector sustainable in the long term?

There have been a lot of changes and when you base your economy on nature and the ecosystem you have to take this into account seriously. In the past, we used to think about wildlife and national parks as ecosystems we should leave to take their own course. Now you cannot, you have to respond to the new challenges. You have to be very dynamic and study and measure things very accurately, you cannot just sit back and push paper. You will lose all the wildlife within 20 to 30 years if you take a laissez-faire approach. Therefore, we are doing quite a bit of modification to the basic conservation principles because we have to respond to the monster that is climate change.