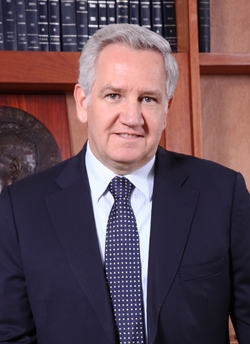 Firm Ground to Build On

José Luis Cabal Sanclemente has close to 40 years in the real estate and construction business. He holds a Civil Engineering degree from Universidad Javeriana in Bogotá, and completed his MBA studies at ICESI in Cali. He has occupied several positions within key project developers and construction firms, among which was as General Manager of Pedro Gómez & Cí­a for 14 years. He was also responsible for high-impact regional infrastructure projects, such as the Malla Vial del Valle del Cauca y Cauca private highway concession, and was one of the promoters of the Sociedad Portuaria de Caldera in Costa Rica, which holds the concession for the Port of Caldera on the Pacific Ocean. Since 2009, he has been the General Manager of Constructora Meléndez SA, a company with a 52-year tradition in Cali.

Share on:
"PPPs are a great tool to promote the development of infrastructure projects."

What does the healthy growth of local construction sector mean for Colombia’s economy at large?

I think the boom the sector is enjoying is the direct result of the boost the current government has given to the construction sector in recent years. Government policies have contributed to providing lower income citizens with housing units. I think that there have never been so many favorable tools for people to access the housing market with, such as low interest rates, the result of which is the sector’s current buoyancy.

What role do public-private partnerships (PPPs) play in the sector?

PPPs are a great tool to promote the development of infrastructure projects, and boost activity in this segment, rendering Colombia still more competitive within the framework of the several free trade agreements (FTAs) it has recently signed. We have also seen a growing trend lately to implement PPPs within the housing segment to boost the development of such projects in municipalities across Colombia’s regions.

“PPPs are a great tool to promote the development of infrastructure projects.”

In your opinion, what kind of housing project does Cali require the most at the moment?

Cali and its neighboring municipalities have a characteristic demand trend. Over the past few years, Cali and its environs have received people from other regions, which has increased the demand for low-cost housing units. Therefore, average demand for such properties is higher in Cali and neighboring towns than elsewhere in the country. In other words, 33% of the housing transactions in Cali and neighboring municipalities are for these low-cost types of properties. Since demand is still more than relevant in this segment, we foresee an increase in demand in the market for properties within strata 3, 2, and 1. I think the future of the construction and real estate sector in Cali is quite bright and promising.

Since the company started operating in the agribusiness industry and later on shifted to the construction sector, becoming one of the most dynamic companies in the country, how has Constructora Meléndez evolved over the last few years?

Innovation and creativity have always been two of the main characteristics of our company. Despite having our origins in agribusiness, the growth of the city and the region, along with the vision of the future our founders had, drove us to become what we are today; one of the most dynamic construction companies in Colombia. The company was initially conceived as Sociedad Garcés Giraldo Hermanos, which engaged in the agricultural business. Also, it had large tracts of land where it cultivated sugar cane, among other staples. The Garcés Giraldo family has always been very close to the development of Cali and the region, and that’s why they donated 1 million sqm for the development of Universidad del Valle. After putting an end to its agribusiness activity, the Garcés Giraldo family saw a very interesting opportunity within the construction sector, developing a portion of its land. That was the beginning of what today is Constructora Meléndez and, ever since, it has been a major player in the local industry, leaving a clear footprint in the urban development of Cali and the region. In fact, the commitment of the family to Cali and the region continued throughout the years with the donation of some more land, the construction of key projects, and their involvement in other large projects that have resulted in essential milestones for the development of the region. Constructora Meléndez has built shopping malls, housing properties, industrial complexes, and more.

What challenges have you encountered down the years?

The construction sector is a rather cyclical one, and our company, like others, has not been oblivious to the crises blighting the sector over the past two decades. The industry suffered from one of the worst crises between 1995 and 1999, a period that saw many companies go bankrupt. Despite its financial difficulties, our company managed to stay afloat thanks to the unconditional and valuable support of its shareholders, and we managed to reverse the situation, positioning the company among the leading companies in the sector in Colombia today. The crisis of the late 1990s taught many companies and authorities to be more cautious when measuring risk. For example, the country adopted the pre-sales model in the industry through real estate trustees, increasing the feeling of security among buyers and making sure constructors appropriately use the money they receive from buyers’ down payments. Financial institutions also became more prudent when granting mortgages. The financial and construction sectors are therefore stronger thanks to the lessons learned from the crisis. We currently have great interest in expanding business activities to cities and towns around the so-called “Coffee Production Belt” of Armenia, Manizales, and Pereira, and also in Bogotá.

How was 2013 for Constructora Meléndez?

We closed the year with a property sales value of around $90 million, with $70 million from housing properties and $20 million from selling corporate solutions. These are the two main segments in which we concentrate our activity today. These were impressive results thanks to the consolidation of projects we launched into the market between 2011 and 2012. The housing properties we sold were praised for their high-quality designs and unbeatable surroundings. Our main goal is to contribute to the development of the city and its communities through several construction projects. Such ambition proves, once more, our commitment toward the development of the city and the region.

What are some of the key projects the company has developed over the years?

Ciudad Meléndez is a very ambitious project spread over 100 hectares, where we aim at constructing between 10,000 to 12,000 housing units. We also envisage the development of commercial, cultural, and educational spaces, providing our clients with comprehensive services. We can also highlight the Cinco Soles project, set to be developed on an area of around 20 hectares, including some 500 residential housing units.

How does the construction and real estate sector work toward a further professionalization of its human work force?

The sector is among the largest employers in the country, and fortunately we have changed old stereotypes about employing an unqualified work force. At the same time, labor laws and regulations have also helped to formalize jobs and boost employability levels in the sector. Our company offers stability and regular training tools to its employees.

What role can companies like Constructora Meléndez play in the reintegration of people within a post-conflict scenario in Colombia?

I think many companies in Colombia, even smaller than ours and engaging in other sectors, need to take a step forward in such processes and contribute to the reduction of violence in the country. We all need to work together to reinsert people and support this process, and our company is willing to take an active role in it.