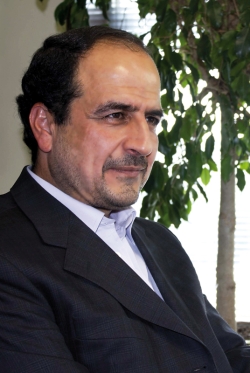 Share on:
How has the development of Iran LNG’s sweetening plant progressed over the last year? A year ago we were just beginning. Now, we have received more than 70% of the […]

How has the development of Iran LNG’s sweetening plant progressed over the last year?

A year ago we were just beginning. Now, we have received more than 70% of the equipment we need in terms of weight, and are expecting to receive the remainder soon and have everything up and running to begin the sweetening project in the 2Q2013. We are also now working on liquefaction, and will later be concentrating entirely on that side of the venture. Progress on that end has reached around 30%, and by the end of 2012 it should reach about 60% or 65%.

To which countries are you going to deliver your products?

We have held negotiations with around 14 countries. First, we started negotiations with European countries, and step-by-step we began to concentrate more on Asian countries. The European market has become less attractive for us due to the cost of energy there—prices in Europe are up to 30% lower than in the Far East. In our belief, Europe will never again be a focus for the LNG sector. Growth in China is at around 7%-10%, while in Europe it is around 1% and consumption is declining due to the falling demand for energy.

Iran has huge reserves of natural gas. How are you managing to meet the increasing demand for gas in the region?

I think that most of the demand for gas in the Middle East will be covered by pipelines from Iran or from other reserves in the Middle East. It is more economic to use pipelines as the primary export method. The government has plans to export gas to Iraq, Syria, and Lebanon in this way, as well as to Turkey and Pakistan.

What can foreign investors bring to the sector?

The international financial crisis has changed many things in the global marketplace, and nobody can say for sure that demand will increase rapidly. For the first phase of the project, we are expecting a 30% rate of return. However, the rate we will achieve from the second phase is unknown. Foreign investors, therefore, have to consider the amount they can make, and whether it is attractive enough.

The company is planning to decrease state ownership from 49% to 20%. How is this process proceeding?

This is a law made by the higher council, and we have to follow it to decrease the government’s ownership of Iran LNG to 20%. This is a must, and it cannot be avoided. However, progress on this issue depends on reaching some important milestones. The government is always ready to put up the money and invest, but the private sector is more concerned about doubtful investments. As we approach certain milestones in our plans, the private sector is becoming more interested in what we are doing and wants to acquire a larger slice of the company. In recent months, we have carried out negotiations with private sector companies and could soon sign some Memorandum of Understandings (MoUs) in order to give investors the chance to receive shares via the privatization process.

What are your expectations over the medium term?

About two months ago, I was in the US at a conference. There, I noticed that US firms are also hesitant to come to the market. Following an increase in unconventional gas exploration, as well as booming production in the US, it was expected that the US would look to go back to being an exporter of LNG, rather than an importer. An LNG plant was also expected to be set up between 2015 and 2017. However, the mood has now turned. There is uncertainty in the global market. Five years ago it was easy to predict that China would import 12% more each year, Europe 2.5%, and the US 5%. Then, an average of around 4%-5% could be reached. Today, some countries are increasing their demand, while others are lowering it. Also, factories in some countries are closing down. When a factory closes, it is sad not only for the families of those that lose their jobs, but it also decreases the demand for energy exports, and that is negative for Iran’s economy.