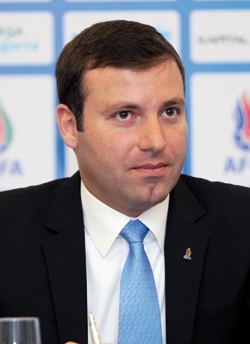 Born in 1979, Elkhan Mammadov graduated from the American InterContinental University and Westminster University in Management, and attained his Master’s degree in Management from the University of Salford. After graduating, he became Deputy Director at Natavan Business Centre, and was then promoted to Director. In 2007 he was appointed General Secretary of the Association of Football Federations of Azerbaijan (AFFA).

Share on:
How would you evaluate the success of the FIFA U-17 cup held in Azerbaijan in October 2012, and how does this pave the way for future international sporting events? The […]

How would you evaluate the success of the FIFA U-17 cup held in Azerbaijan in October 2012, and how does this pave the way for future international sporting events?

The FIFA U-17 Women’s World Cup 2012 was the first tournament of its kind in Europe and in the Muslim world. We did our best to organize it at the highest level, and I believe we succeeded. There is no doubt that such large events have a huge impact for the future development of the sporting infrastructure in general because of the legacy that they leave behind. There are a number of stadiums that have been part of the legacy of the World Cup, such as the Bakcell Arena, Dalgha Arena, and Bayil Stadium. There are already some other international football events that take place in Azerbaijan, such as the Caspian Cup, which is for U-17 national football teams. There were eight participating national teams in the Caspian Cup 2011 and Caspian Cup 2012. In 2013, there will be 12 teams, and we already have confirmation from large footballing countries such as Turkey, Japan, and the US. Additionally, according to a decision of UEFA’s Executive Committee, Azerbaijan will host the U-17 UEFA European Championship Final Tournament in 2016. Hosting such international tournaments has a positive influence on our country, and provides a precedence to organizing other major international sporting events Azerbaijan.

How would you evaluate the success of your grassroots football program held in cities around Azerbaijan?

There are many different grassroots events organized by AFFA, not only in Baku and Lankaran, but all over the country. Such events assist us greatly in identifying young talent, generating mass participation, and popularizing the game among the younger generations. Grassroots events are an excellent foundation to achieve success in football, and such events will benefit the game. We organize several events in order to promote women’s football in the country, such as the Live Your Goals event, which we held jointly with FIFA. Other events, such as the Ball Festival and Grassroots Festival, are regularly conducted throughout Azerbaijan.

Do you expect Azerbaijan to be able to participate in the 2014 World Cup?

Our national team has already played four official matches in the current 2014 World Cup qualification round. We drew against Israel and Northern Ireland, and lost to group leaders Portugal and Russia. It is not easy to qualify for the World Cup Finals, but we have four home matches coming up, and we expect good results.

How would you evaluate the current economic climate in the country, and what effect does this have on the growth of sports?

Azerbaijan is now hosting numerous European and international events and tournaments as a result of the continuous support from President Ilham Aliyev. Many Olympic centers have been built in different regions, and now members of the public are starting to use them. At the same time, several more centers are being built. Since 2011, we have seen remarkable progress in terms of the completion of several new stadiums such as Dalga Arena, Bayil Stadium, Bakcell Arena, Agsu Stadium, and Bina Stadium. We have also completely renovated the Tofig Bahramov Stadium, and commenced construction of the Olympic Stadium, which will have a 65,000-person capacity. There are many infrastructure projects that have been completed recently, and there are a number of projects that are currently under construction. In 2012, Azerbaijan hosted the FIFA U-17 Women’s World Cup, and now it is going to host one of the final rounds of the U-17 European Championship 2016. In addition to this, the European Olympic Games will be held in Azerbaijan in 2015. This shows that international sports organizations trust Azerbaijan as a reliable event partner.

What are the medium-term plans for AFFA?

The main objective of our association is to prepare for the U-17 UEFA European Championship, which will be held in Baku in 2016. We are now training a national team that will represent our country in the tournament. We are planning to establish football academies for some of the big-name football clubs of Azerbaijan in 2013. We are also planning to take part in the bidding process to be a part of the 13 host countries for the UEFA European Championship 2020, and this will be one of our main focuses in the medium term.