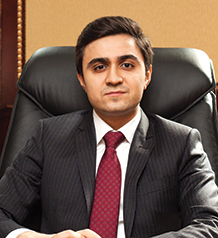 Share on:
TBY talks to Anvar Anvarli, Executive Director of Porsche Azerbaijan, on the characteristics that make Azerbaijan as an ideal market for modern, luxury vehicles, and building a brand by hosting events and adapting to the local economy.

What have been some of Porsche’s major sales activities in Azerbaijan in 2014, and what are your targets for 2015?

Overall, 2014 was extremely successful for Porsche Azerbaijan. We organized several launch events in order to showcase some new products, such as the new Cayenne and Macan. In addition, we are continuously organizing local and international driving events in order to maintain our relationships with Porsche drivers; for example, Porsche Road Show, which takes place almost every year. In the last year for the Road Show, we headed to one of the most beautiful cities of Azerbaijan, Shamakhi, with our clients. The aim of the event was to test some of the Porsche models and generally have a great time. Although 2014 was extremely successful for Porsche Center Baku, we are planning for an even higher sales volume for 2015. I would like to mention that the year 2015 is full of aims and objectives not only for Porsche, but for the whole of Azerbaijan. We are sure that Porsche Center Baku will present its development and improvement to all automobile fans.

Porsche has introduced the Macan model as well as releasing several upgrades in 2014. How important have these been for sales in Azerbaijan over the last year?

Porsche fans and customers always looked forward to any updates in the model range, because every time Porsche proves that excellence has no limits. It became obvious from our last presentations that Porsche is taking care of all its models. Regardless of size, speed, and design, they all truly remain a Porsche. New products, such as the Macan and the Cayenne S and Turbo, are overtaking competitive models by performance and design, and are helping to maintain high sales volumes. We are also expecting several improvements in our model range for 2015.

Porsche increased global deliveries to customers from January to November 2014 to more than 169,000 vehicles. To what extent does this global growth apply to Porsche’s success in Azerbaijan?

Azerbaijan also provides significant support to Porsche’s development in the region. One of the reasons for this is the fact that Baku is a modern and fashionable city, which motivates its citizens to drive such beautiful cars as Porsche. The development of the city’s infrastructure has highly influenced our sales volume.

How would you assess Porsche sales in Azerbaijan compared with the rest of the region?

We were less known as Porsche Azerbaijan in the region when we were newly established. However, we managed to introduce the Porsche brand to citizens in the best way and rapidly increase our sales volume. Nowadays, Azerbaijan is one of the fastest developing markets for Porsche and one of the best for the region. I hope that this tendency will remain in an upward curve in the future.

Porsche has already hosted prominent events, such as the City Challenge and the Baku World Challenge in Azerbaijan. Looking ahead to the First European Games in 2015 and the Formula One in 2016, what opportunities do such events provide for Porsche?

As Porsche focuses on sport cars, participating in a range of Race competitions and winning several world awards, we are extremely happy to observe this growing attention to auto sport. Therefore, as Porsche has always supported sport events in Azerbaijan, we will do our best to support the upcoming European Games and Formula One.

How would you assess the importance of events such as these in the development of Azerbaijan’s non-oil sectors?

In our opinion, the events taking place in Azerbaijan have a huge impact on the country’s economic development and non-oil sectors in particular. All the novelties in Azerbaijan pave the way for country’s worldwide recognition, which is the result of the ideal politics of our President HE Ilham Aliyev. We are sure that the President is doing his best for our country’s development.