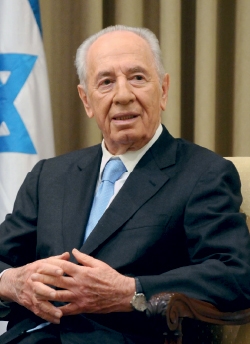 Shimon Peres is the ninth and current President of Israel. He served twice as Prime Minister and twice as Interim Prime Minister, having been involved in politics for over 66 years. Born in Poland in 1923, He studied at the Ben Shemen Agricultural School, and was one of the founders of Kibbutz Alumot in the Jordan Valley. He took an active role in the war of independence, and was later appointed, in 1953, as the Director General of the Ministry of Defense. He has been a member of the Knesset since 1959.

How would you assess Kazakhstan’s development since independence?

Kazakhstan, under the leadership of President Nazarbayev, has proven that the greatness of a country is dependent upon the greatness of its people, the quality of scientists, and the vision of its leadership. Kazakhstan, under President Nazarbayev, dismantled its nuclear weapons and shifted its focus to the education, welfare, and prosperity of its citizens.

Kazakhstan stands as one of Israel’s main economic partners in Central Asia, and trade turnover between the two nations amounted at approximately $1.5 billion in 2012. What is at the core of the strong economic ties between Kazakhstan and Israel, and which segments hold the most potential for future developments?

Kazakhstan is Israel’s major economic partner in Central Asia, and our two countries are committed to further developing these relations. In the last 20 years, we have formed many joint economic ventures such as the Israel-Kazakhstan economic conference, trade centers, and exchanges of know-how between our experts in many fields such as agriculture, energy, and innovation. Though our cooperation has flourished over the years, there remains great potential for growth in the economic relations between us, a development that would benefit both Israel and Kazakhstan. The main source of potential is science and technology. Today, the global economy is based on innovation, and Israel has much experience in this field. We came to a small and unforgiving land, with little water and no natural resources. Our survival was dependent on creativity, innovation, and science. Today, we gladly share our experience with our friends across the world, including Kazakhstan.

In 2014, Israeli defense minister Moshe Ya’alon and his Kazakhstani counterpart, Adilbek Dzhaksybekov, signed a defense cooperation agreement between the two countries. What are the prospects of future bilateral cooperation in the areas of defense and technology between Kazakhstan and Israel?

There is tremendous potential for strategic cooperation between our countries. Kazakhstan is a key partner in preserving regional peace, stability, and security. The major threat to the world is terrorism. Terrorism today is global; no country can fight it alone. Terror knows no borders, and respects no laws. It affects us all, and we must all unite in the fight against it.

What is your outlook on the future of ties between the two countries?

We live in a world where geographical distance no longer matters. Israel and Kazakhstan can be neighbors despite not sharing a physical border. Furthermore, we welcome visitors from Kazakhstan to Israel and believe that they will find here a place both rich in history and flourishing with modernity.