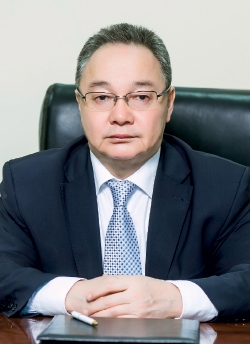 Eye on the Future

In 1979, Abdikarim Zeynullin graduated from Kazakh Polytechnic Institute with a Mining and Engineering degree. He has extensive experience in research and education. He is one of the developers of the “On Science“ Law and several industry research programs. He created a scientific school of quality management in mining ore. He is a doctor of technical sciences, as well as a Member of the National Engineering Academy of Sciences and the Kazakhstan National Academy of Natural Sciences.

Share on:
How does Parasat pair up with research institutions and universities? We are working on several projects with the Center of Earth Sciences, Metallurgy, and Ore Benefication. One of our priorities […]

How does Parasat pair up with research institutions and universities?

We are working on several projects with the Center of Earth Sciences, Metallurgy, and Ore Benefication. One of our priorities is to commercialize scientific research, an example being a patent for silica production for the metallurgy industry that curbs costs. Silicon is the future of the high-tech industry, although in the distant future it will possibly be replaced by alternative materials. Today, silica is used in solar panels and diodes. There are three silicon-producing plants in Kazakhstan; however, they are not profitable due to being unable to compete with the lower prices offered by Chinese producers. To make Kazakhstani silicon more competitive, our scientists have developed a technology that uses a carbon reductant for silicon production. It is scheduled to launch in summer 2014, and industrial enterprises will be able to examine production and technological sustainability. So far, we have made an investment of around $3 million.

What does innovation and change mean for Parasat?

The projects and programs that we run are innovative, because they are grounded in new scientific findings and patents. The plan is to establish a knowledge-based economy, and we, therefore, need to reshape the economy toward innovation over the coming years. At Parasat, we promote promising technologies that will have a synergistic effect on the economy. Kazakhstan is a resource-rich country, with oil and gas, as well as rare earth metals. The resource-based economy is a solid foundation for a future innovation paradigm. A high-tech economy requires the refining of raw materials, such as producing petrochemicals instead of selling crude oil and gas. The future of high technologies lies in rare earth materials, and Kazakhstan is among the few countries to have the resources to merit production. The Institute of Physics and Technology possesses the technological infrastructure required for rare metals-based solid fuel production.

How will Parasat and technological development boost Kazakhstan’s economy in the future?

There is a project on diode production, for example, at the Astana Industrial Park, a special zone offering tax and customs preferences. There was a group of young entrepreneurs who wanted to set up diode production and sought out our assistance. Diode lighting saves energy and is better for your eyes, and we are now working in partnership with SEMI LED, based in the US and South Korea, to purchase diode-producing equipment. The Institute of Physics and Technology there has elaborated the production plan. Kazakhstan’s economy is based on the mining and metallurgical industry, primarily on rare earth metals. As such, it is necessary to use this mineral potential wisely. Kazakhstan also has a strong and dynamic agricultural sector, meaning there is great potential for developing new technologies in this field. There are certain plants and herbs in Kazakhstan that can be used to produce pharmaceuticals. Phytochem Holding (a component of Parasat Holding) produces mainly natural medicine with limited side effects. The Kazakhstani economy will continue to grow by also taking into account traditional industries. In the future, Kazakhstan will have a self-sufficient space industry, which has already taken off with the Baikonur project. Another area of growth is transport and logistics. Kazakhstan ranks as the ninth largest country in the world in terms of territory. The country can benefit from its position between China and Europe. Currently, it takes 45 days to ship the goods from China to Europe. There is a new railroad under construction, and China is interested in constructing a new canal to speed up the delivery of goods. In addition, a new channel to connect the Caspian and Black seas is under consideration with a capacity of 65 million tons per annum. There is also an affiliated company that produces pharmaceuticals in Ust-Kamenogorsk (Eastern Kazakhstan).